Yes, I bought a van.  It is a 2007 Chevy Express 3/4 ton cargo van with 70,000 miles on it.  That’s low mileage for a van… The price was right and it seems to run and drive nicely.  The original plan was to do some experiments with AGM batteries prior to buying the van, but the order of things has now changed a bit. 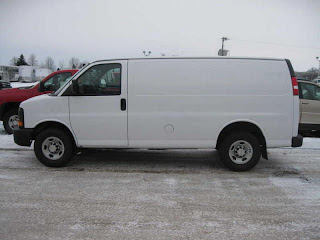 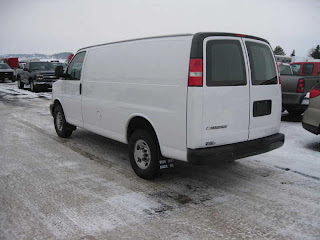 I have already begun interior preparations.  Here is what I am planning on doing…

2)  The next step will be to insulate the ceiling.  I plan to insulate as well as possible using 1 inch styrofoam.  If I have not yet obtained the ceiling vent, I will cut a hole and then temporarily seal it up until the roof vent is ready to place.  It will be 14″ x 14″.  Because I am rather largely built (fat), I will (against better judgment), cut the vent hole from the inside, premeasuring as I go.

3)  Build a bulkhead wall to protect the driver and passenger from flying debris also called airborne crap.  It will have a small opening with a curtain, door, or both to separate the cab from the cargo area.  The idea is to block out all light from exiting the van.

4)  Install the Luann plywood walls (first driver’s side, then passenger’s side).

5)  Cover the bulkhead wall and doors.

6)  Cover the ceiling with Luann plywood.

8)  Cut chipboard (using mat as an example) and fit to the shape of the interior.

9)  After placing the chipboard where it will reside, install the flooring.  It is yet to be determined but I am leaning more toward a laminate flooring product (cheap, durable, and easy to clean) although I have not ruled out carpet…

The next steps will include building a bed, kitchenette, and various other accessories.  I will document each along the way.