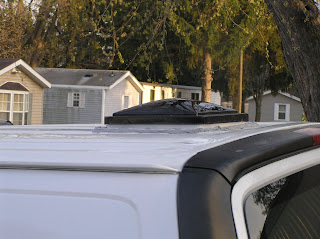 As an important part of the van conversion project, a roof vent van was ordered.  There are a number of vents and fan combin,ations out there.  Particularly important to me were convenience and water protection.  If you spend quite a bit of time living or camping in a van, a lot of moisture will accumulate.  A person expels a great deal of water when breathing.  The water accumulates on the ceiling and either drips on you or turns into mold.  It is essential to keep air circulated to maintain a reasonable humidity level and air quality.

Keeping mother nature from dumping water in your dwelling is paramount.  If I am somewhere and the skies open up, I want a vent that will close itself if it is open.  Worse yet, can you imagine being in a building and not knowing your van is getting rained in?  The Fantastic 6600 will close itself at the first detection of a raindrop or two.

Convenience is also necessary though perhaps to a lesser degree.  I have some health issues including sleep apnea and my eyesight is crappy without glasses.  I don’t want to be in bed and then have to take off the CPAP mask and try to stand up (bonking the head on the ceiling) so I can poke and diddle some switches to adjust the vent fan.

The fan has more settings to fart around with as opposed to a TV where normally it’s just on, volume, and channel.  I really wanted a remote control.  It could be kept in a cradle by the bed.

Cost was a concern though.  Prices varied wildly for the same model but in general they were all a little higher than I was comfortable with.  And then…

I got on the Internet and found a close-out on a Fantastic 6600 roof vent fan on a clearance.  I got an incredible price and there was only one left.  Just a day ago there were ten.  I had resigned myself to getting a lesser fan so you can imagine the delight when I found the full featured model including a remote control and free shipping. 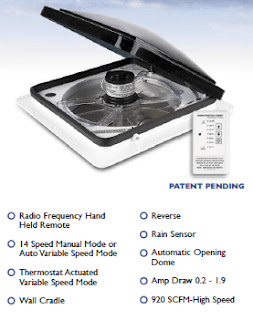 As I install it, there will be pictures and text to document the efforts.  I know cutting a hole in your roof sounds scary but it is not rocket science, folks.  What about sunroofs?  People install them every day and they don’t leak if you do it carefully.  A vent fan is much easier!

Update… on 04/14/2011 I installed the roof vent. It’s working perfectly and there is no sign of leakage.  The true test will come soon with the April rains.