Joining the Walls and Ceiling – A Rewarding Effort 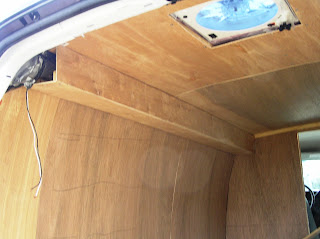 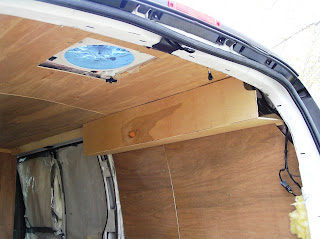 (Yes, the garnish will be installed soon for the ceiling vent fan!)

Today was another great day.  Once the April rains subsided, it was time to hit it hard again.  Today I had to make a little box down the driver’s side to join the ceiling and side wall together.  Yesterday I did the short wall on the passenger’s side.  Today was more challenging since the thing was eight feet long.

Putting up with the furring strips concealed was a bit of a trick.  It didn’t go smoothly the first time, that’s for sure!  There is no sin in tacking things with a nail or a screw.

These are the steps that made it very quick and easy!

For now, I plan to leave the overhead boxes open, particularly the one by the bed.  That little channel could come in handy for cables, fishing rods, etc.

Tomorrow comes some of the less enjoyable tasks:  Finish the bulkhead (passenger side) and find a way to enclose more of the back of the van (aesthetics).