Below is a picture of the USS Riverside, a model used for the annual Star Trek Festival in Riverside, Iowa.  Yes, that’s me doing the Vulcan salute…  🙂 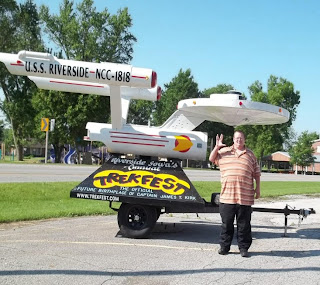 I live within 20 minutes of Riverside.  During the course of the original Star Trek movies, William Shatner referred to being from Iowa.  You saw the quote from Star Trek IV.  Fans lobbied Star Trek creator, Gene Roddenberry, and it was decided that Riverside, Iowa would be the future birthplace of James T. Kirk, contrary to the way the newest Star Trek movie had him delivered while escaping the evil Nero’s attack.  Riverside has an annual festival and even a granite marker (like a tombstone) which announces Kirk’s birthplace. 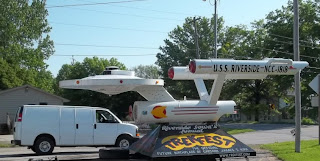 You can see the Trekker Van in the background…  Last night I parked it at the Riverside Casino just  a few miles away.  After the obligatory $3.00 hotdog (all beef and delicious) as well as a number of small complimentary cups of Diet Coke, I hit the slots.  The machines were hitting pretty good for some reason and it was a lot of fun.  For a most of an hour I played and only lost $5.  After moving to another machine, I was up $150.00.  On the way out, I heard famaliar voices while walking by a machine.  It was calling to me using the voices of Kirk and Spock.  I put $20 into the Star Trek slot machine.  Usually that machine kicks my butt but last night was a lucrative night. 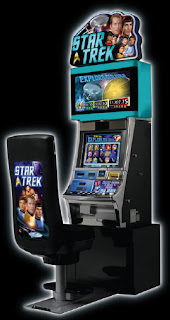 Luckily, four images of Captain Kirk and a wild card multiplier came up.  Long story short, I walked away with $181.05 more than I started with.  Woo hoo.  I like “campgrounds” where they give you free soda and pay you to camp there… It was a fun time.

I have given the van a name after pondering it the last few months.  First of all, it’s going to be called the NCC-2708.  The name of the van is the USS Dora.  Dora was my mother’s name prior to being adopted (after which if became Doris).  Dora is, of course, also a kid’s icon… Dora the Explorer.  My mother was tenacious and loved to travel and see new things.  Though I miss her very much she also allowed me the means to seek out and explore new things via this unmarked, plain-jane van.  It’s the next best thing to a cloked ship.  I know Mom would have be proud.  I keep a picture of her on the passenger’s side of the Trekker Van.