I have TV and DVD now! 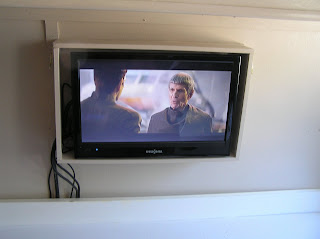 This was without a doubt the most time consuming and rewarding task to date with the van.  I built an enclosure and mounted the TV.  By the way, that little bit of shininess on the screen at the far top right is a reflection from the unblocked back windows.  This TV works great even with outside light present!

Once I built the little box. I realized that it was impossible to slide the TV onto the mounting bracket.  Then it dawned on me it would also be necessary to remove the TV during frigid conditions if the van was not going to be kept warm.  Son of a beeswax!!! 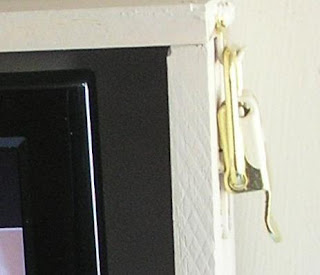 I took the box apart at the top and instead of nailing or screwing the top on, I decided to make it removable via a draw latch on each side of the top.  Now the box stays up permanently but the TV can be taken down rather quickly.  I know what you’re thinking… No, it’s not THAT easy to steal.  It’s cramped and there are many cables…  🙂

The next step was to mount the box to the curved wall.  Because of the location of the horizontal furring strip, I chose a 5/8″ dowel rod which I ran along the box.  First the dowel rod was fastened to the wall via screws ( make sure and drill a pilot hole!!!).  Then the box was attached with screws, again drilling pilot holes.  The dowel rod will split if you get a little rough with your fastening activity.  The result is that the box is slightly angled downward so that when you lay in bed you get a perfect straight-on viewing of the TV.  It rocks!

The TV and DVD player work well with the inverter.  I could see no issues with the modified sine power.  The first movie to go in was the remake of Star Trek.  I cranked the music and it sounded quite good.  For some reason the hokey little box actually gave it a nice voice.  The speakers are in the back of the TV but they pack enough punch to sound decent.

Now it’s time to get the rear in gear and finish a lot of loose ends.  The Trekker Van will be ready for Memorial Day weekend!

3 Responses to I have TV and DVD now!