An Emergency Battery Charger that is Quite Capable 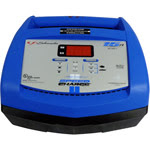 ((( UPDATE – Factory is going to replace the Iota for free including shipping! )))﻿

After crying in my Diet Coke all night about the Iota charger failing, it suddenly occurred to buy a cheapie charger and top off the house batteries with a portable unit.  If the charger was a piece of crap, I could always return it after the new Iota came…  😉

I went to Wally World (Wal-Mart) and bought a little Schumacher XCS15 marine charger.  It will charge at 15Amps (my old one was 55Amps). That is not a bad rate if you don’t have a big bank of batteries or try to run them into the ground between charges.  Half drained, my battery bank would be 230 AH which would take about a day to charge.  For the little excursions, it never sees more than about 25% discharge or about 100A at most.  The little charger can handle that in a night.

The Shumacher has a three stage charge rate that is controlled by a microprocessor.  It’s incredibly simple to use:  just hook it up, turn it on, and select the battery type.

There is a helpful LED display that indicates the percent of charge present in the battery.  As a former 1980s era electronics technician and half-blind dimwit, I was thrilled to see BIG RED LEDs.  LCDs are no fun to try and read!  When the display reaches 100% you can turn it off or leave it on to maintain a full charge status.  I will opt to turn off the unit after an hour or two at 100%.  AGM batteries have slow self-discharge rates so it is better to be safe and unhook than to leave it on when the microwave kicks in.

Granted, this is NOT a charger you want to abuse.  It’s probably not going to put out very clean DC and certainly not a lot of it.  Don’t leave it on and crank up the inverter and microwave.  You might fry it!  Hell, you likely will fry it – I’d bet money if you think you wont.

But if you want a cute little portable charger for those cold winter nights, this is a impressive but compact and lightweight unit that won’t set you back more than about $50.  It’s a good investment.  I’m going to put this little guy in an old CPAP carrying case and tuck him under the bed just in case I fry another expensive charger.

2 Responses to An Emergency Battery Charger that is Quite Capable