Staying Warm with a Buddy (heater) 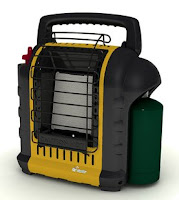 The Mr. Heater Tough Buddy
Tonight I took the plunge and decided to get a heater for the Trekker Van.  With cold weather coming it seemed like a good idea.  There were several considerations that needed to be addressed before making a purchase.
I wanted a heater than would run on spin-on propane containers.  Though a person can also use a 20 lb propane tank outside the van, I decided to use 1 lb canisters inside the van.  Whatever heater was purchased needed to be easily stored and needed to have protection from tipping and carbon monoxide.
Having read articles from other van campers, I was curious about the Mr. Heater line of products.  The local hardware store had a Mr. Heater Buddy unit for $87.99. Lowe’s was $79.99.  The one at Lowe’s was called a Mr. Heater Tough Buddy.  Other than a little yellow and black plastic (which looks kind of masculine and tough), I didn’t see any differences between the Buddy and Tough Buddy models.   Pretty sure this would fit the need, I bought the Tough Buddy and two canisters of propane.
The first time I fired it up, The Mr. Heater was difficult to light.  The pilot light just didn’t want to work.  It seemed related to running the roof fan and box fan at a moderate speed.  Shutting off the box van and turning down the Fantastic roof vent fan helped.  Once fired up, the heater did its job.  I was roasting in a few short minutes.  Because my Tough Buddy did get so hot, it seemed a good idea to pass along some safety thoughts.
1)  Carbon monoxide is a risk.  Don’t be fooled by “safe indoors” claims plastered on the box.  Put up a carbon monoxide detector before sleeping even one night.  Just because the Mr. Heater Buddy has a detector and shutoff for carbon monoxide, I would not bet my life on it.
2)  The Mr. Buddy gets hot.  Place it as far away from combustibles as possible.  Since the Mr. Buddy  does not require rear clearance, use the hanger holes in the back of the case to suspend it.  For me, the side swing out door is a perfect place to hang it up.
3)  Run the roof fan (if you have one) on “OUT” to vent the lighter-than-air carbon monoxide.  Even the lowest setting will still move plenty of air.
So far, the Mr. Heater Tough Buddy has been exactly what I was hoping for.  The size is right and it really cranks out the heat.  It will be a lot of fun during ice fishing season in a few short months.
So how do you stay warm in your vehicle?   I would enjoy hearing your stories and comments.  As always, thank you for reading and exchanging thoughts and ideas.
My personal email is Brad52317@aol.com

3 Responses to Staying Warm with a Buddy (heater)