My Dad and I went leaf gazing today and had a few adventures.  We explored some new places and visited ones we have been visiting for many years.  There are a couple of pictures I had to share.  Two of them are quite amusing.

As we started the trip, we passed by a corner house northeast of Cedar Rapids in the town of Viola.  There were two trailers for sale.  One was a small trailer with a coffin attached.  The other was a pop up trailer that said “It’s bigger when you get it up.”  We both had a good laugh. 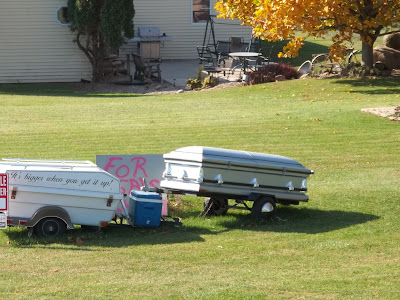 From there Dad and I checked out the Matsell Bridge campground.  It’s a primitive, isolated campground with great prospects for a day of camping.  I might have to camp it just for the scenery.
Located along the Wapsipinicon River, the scenery is as beautiful as the fishing is good.
From there, we visited a monastery and abbey near the town of Dubuque.  Dad commented about how simple life is for a monk.  I told him it’s just as relaxing sleeping and camping in a van.  Life is slower and there is more time to reflect.
Later in the afternoon, Dad and I continued our sight-seeing and visited the German-influenced town of Gutenberg.  It’s a small community with lots of shopping and a spectacular view of the Mississippi River.  Near Gutenberg we visited a roadside stand and purchased tasty jams from some local ladies.  Their products are homemade and awesome!  Dad likes the four berry jam:  Strawberry, Blueberry, Blackberry, and Red Raspberry.  My favorite is straight blackberry.  It’s all good though! Scenic Overlook from Highway 52 near Gutenberg, Iowa.
We are looking upstream at the Mississippi River just south of town. 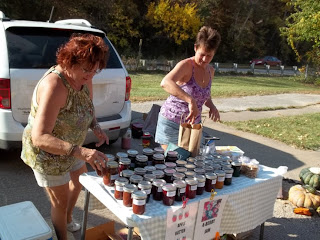 The Jam and Jelly Ladies
Dad and I continued our leaf trek for about another forty miles and marvelled at the orange, red, yellow, and green clumps of trees.  As we returned to town we visited the St. Olaf Tap (listed in a previous posting) and got some of their famous tenderloin sandwiches.  I get “The Big One” which is 20 ounces.  Dad bought a smaller but equally tasty version.  With bellies full, we got on the road for one more adventure.
Dad wanted to visit the towns of Garber and Elkport (separated by a small bridge) which are located along the flood prone Turkey River.  There is also an unofficial settlement called “Tickletown” but you will never find it on a map.  Many years ago the Turkey River flooded for the umpteenth time and swamped the two towns.  A number of houses were moved to higher ground.  Predictably, the damn river flooded again and people who had moved were so tickled (happy beyond measure) that this area was – and still is – referred to as Tickle Town.  While in Elkport, I noticed that houses in the low area that were flooded in 2008 were bulldozed.  They were replaced by a campground with city water and electricity.  Woo hoo!
Dad and I headed south and decided to return home.  We discussed the “Hansel Cemetery”, a private cemetery occupied by a number of Hansel family members.  We are “Harris” folks, but there are some ties to the Hansels.  The cemetery is on a dead-end gravel road in the middle of nowhere.  For years, Dad and I could never find it.  Tonight I noticed a new road marker with a arrow directing us down a gravel road.  We took the road and found the graves of our beloved friends and family members.  Dad was very pleased.  We also had a good laugh.
Being a person with a warped sense of humor, I took the following picture.  I hope this is as amusing to you as much as Dad and I.  Note how the Hansel Cemetery sign appears to point to “Dead End”… No doubt there… 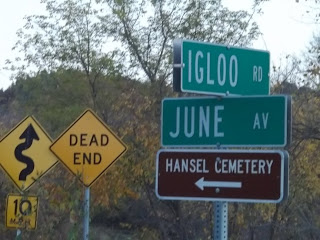 Dad and I had lots of time to talk today.  He encouraged me to camp MORE this fall while the weather is holding out and sees the good that it does for a person.  We had so much fun today and I thanked God tonight that we can keep spending time together.  Life is too short not to slow down and enjoy every minute.