Toasted and Roasted – A Fun Party and Camping Expedition

Good Sunday morning… I’m surprised that yesterday was so much fun yet I don’t feel too much worse for the wear…  Yesterday I was in Jones County, Iowa, near the birthplace of artist Grant Wood. 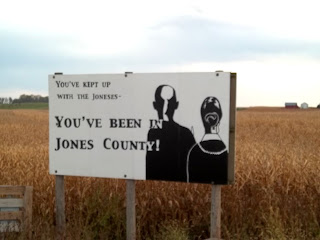 Saturday was the 40th birthday of a sweet lady named Chris.  She is the girlfriend of Tony, a good friend.  I was invited to come out for a celebration that included a few drinks, hot dogs and burgers, etc.  I asked Tony if it was okay to plug in to their electricity – even offered to pay him for the usage – but he wouldn’t accept any money.  Since Tony and Chris live on an acreage, there are utility poles around in several places – each offering 110V plug ins.  Woo hoo! 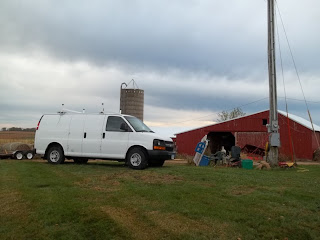 The afternoon was fun and relaxing with little “consumption” until later in the evening.  The kids departed around 9:00 with their grandparents.  I think that Grandma and Grandpa were every bit as happy to see the children as kids were to see the grandparents.

It was a relaxing environment.  That was greatly needed because a couple hours earlier something very unfortunate happened that almost ended the fun.

About mid-afternoon, I received a phone call from a relative who had been reading Facebook and saw a posting by me that was highly offensive.  A friend had been chiding me about bad choices in relationships I had made and I countered with a supposedly private, TMI (too much information) type of posting… It apparently went to the whole world and really angered part of my family.  There was concern expressed that other people might view the posting and think negatively because my content showed up on others’ webpages.  I have evolved beyond worrying about what the rest of the world thinks but do respect others’ feelings in that regard.

To address the problem I hopped in the Trekker Van and headed at “full impulse power” to a small town McDonald’s about 8 miles away so I could use their free wi-fi.  Deciding that Facebook is of little value and has major privacy concerns (despite all the patches they are putting into it), I deleted my Facebook account.  In recent days, this had been contemplated doing this.  There is too much risk to using Facebook for any benefits derived.  After all, I’d like to be LESS visible to friends and family…

Unfortunately, when zipping over to McDonalds, I did so at a pretty good clip despite thirty mile per hour crosswinds. During the hasty departure I inadvertently left the TV antenna on the roof.  About the time the van got up to speed, the boomerang antenna blew off, separated from its quick disconnect coax connectors, and wound up in the ditch.  The black wing tips fell off somewhere but otherwise the antenna was undamaged.  There went another of its “nine lives”.  No harm done at least.  Note to self – post a reminder card in the van to check several things such as the antenna before moving the van.

After putting out the Facebook wildfire, I rejoined the party.  As it got later in the evening, Tony’s and Chris’ get-together gained momentum.  We ate a nice meal of hamburgers and hot dogs followed by cupcakes, jello shots, etc.  I decided to take a little insulin to compensate for the food but with slightly impaired judgment, ended up taking 50 units – the night time dose – instead of 10.  No problem there but I did have to sleep it off…  I was feeling pretty sluggish. 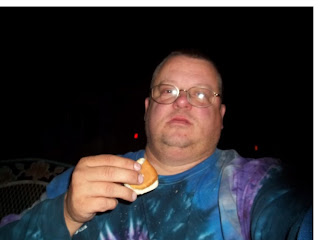 Slept it all off… “Now, peeszh pash me anudder Jello Shot… *burp*”

After waking up later that night and learning that the Iowa Hawkeyes had won their football game, it was time to join the raucous group of about eight die hards.  We sat outside in lawn chairs in front of a bonfire roasting hot dogs and roasting Tony.  Tony was making comments about putting his weenie in the fire and everyone from 12 to 50+ years old were making wisecracks about Tony’s weenie, etc.  It was PG rated conversation but a great deal of fun.  No, none THAT it is going on Facebook…  🙂 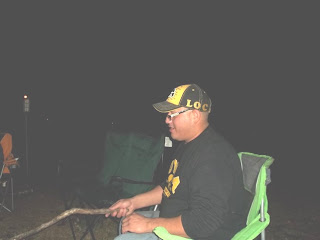 Tony holding his weenie over the fire

Later in the evening we could hear coyotes howling.  They were close to us.  According to Tony, they were the closest they have ever been.  There was no danger but still Tony went in the house and came back out with a trusty 12 gauge shotgun.  A few gunshots later the howling stopped.  Nonetheless, the women and children were spooked and the party broke up a little while later.

I camped in the van with the electric heater churning away on low.  A glace at the indoor / outdoor thermometer read 39 outside and about 78 inside.  It was a pleasant, quiet night to sleep.

The lesson learned this time was that when something stressful happens with the family, one should not blame him or herself.  It is too easy to ruminate over mistakes, particularly dumb ones.  I was careless and screwed up.  We are all different and need to respect each other’s views, myself included.  I learned that certain conversations should never be posted because there is NO guarantee of privacy, especially concerning social networking sites.  But we are all human and shit happens.

How we recover from mistakes is what matters, not that we’ve made them.  In that regard, the van is symbolic of my life because it doesn’t go backwards very well.  The best visibility is looking forward, as life should be.  The van serves its purpose going forward and only when needed, glancing back.  Life goes on.