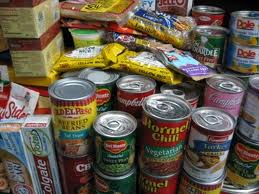 Food safety is something that concerns me.  Tonight I had an incident that I wanted to share.  In addition, much was learned about food safety after having worked in a food pantry for about two and a half years.  Some of these tips come directly from our regional food distribution centers.

Here are some thoughts in no particular order…

1)  My two cents… Beware of food purchased at large retailers such as Walmart.
Last summer I received a spoiled package of refrigerated crab meat from Walmart in Iowa City.  One of the gals in customer service advised that some of the clients with food stamps buy the refrigerated items and return them a day or two later for store credit, presumably to buy cigarettes and alcohol.  She advised that meat products (due to the high cost) were occasionally returned.  The health department in Johnson County declined to get involved when I called them regarding this terrifying notion.  I now only buy meats and seafood from a staffed fresh meat counter.  Translated, that means I will NOT buy packaged meat from Walmart…

Tonight I went to open a jar of bruschetta purchased this morning only to find a knife dent in the lid and a bad seal.  It was likely a returned item.  I’ve decided to avoid Walmart as much as possible for procuring food unless it is in a tin can.  I think they are too careless with food returns.

2)  If you are receiving food pantry items, never take a can with rust on it.  Rust only spreads.  It takes just a tiny little hole in the rust – not even visible to the eye – to allow air into the can and spoil the food.

3)  Small dents are okay but avoid any can with dents in the lid area for the same reason as #2.  A small dent in the side should not hurt anything but examine it carefully.  Avoid any badly dented cans.

4)  Look carefully at the logo.  When sorting foods at the pantry, I saw seemingly new cans that had evidently been in “Grandma’s cupboard” for twenty years or more. I remember a can that looked new but the HyVee grocery store logo on it was in use back when Reagan was president!  It would have been a great museum item but could have made a person sick.

6) Never accept an opened item – even from a food pantry.  An example might be part of a container of oatmeal.  When sorting food at the community food pantry we were not allowed to accept open item donations but I did see some go through once in a while.

7) Try to keep canned food at 85 degrees or lower.  Ideally 50 to 75 is better but not always possible.  Since I do most of my camping in urban areas and for short period of times, the food is often purchased before the trip.  Try not to let the cans approach 100 degrees because it can increase spoilage changes and may cause nutrient loss.

8)  Bulging packaging… In the old days we were used to seeing bulging cans occasionally.  Never open or consume anything from a can that’s bulging – it is rotting inside.  Lately, I’ve encountered some plastic packaged items that have been bulging too.  I remember when working at the gas station restaurant I had to throw away a large bag of ketchup that had bulged so bad it was oozing ketchup out through the built-in spigot.  The owner told the kids to use the ketchup anyway.  I discarded it immediately.  Bulging = gas.  Discard immediately and carefully.
9)  The rule on thawing out meat is not to leave it sit on the counter overnight.  If I do, it is wrapped in newspaper or contained in a small cooler to help keeping it from spoiling as quickly.  Though logical, the official recommendation is to that in the fridge.  Make sure and cook meat – particularly if ground –  well done if it has been sitting out.

10)  Avoid cross contamination.  It’s very common to see someone use the same knife for cutting uncooked vegetables that he/she used to cut meat. When going on a camping trip, I prep and pack before I go.  I try to cut the stew veggies and store them in one bag and the meat in another.   If on  the road, I get my veggies from a salad bar and store them separately from the meat.  The butcher counter meat package  gets wrapped in a separate shopping bag just to prevent meat juices (blood) from dripping.

Sorry that this post was so long… Food safety has been on my mind lately and it’s something I try to impress upon my Dad… A few seconds saved are not worth stomach cramps tomorrow… or worse.

Have a good one!
Brad