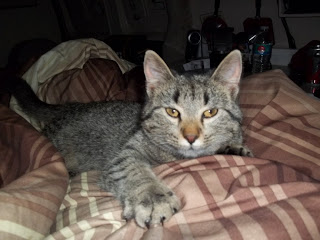 Good morning.  Hopefully everyone enjoyed Thanksgiving yesterday.  I had a really fun trip to a buddy’s house and made a new friend.  She’s the cutest little thing and I wanted to share a picture with you.  Here’s how the day started…

In the morning, Dad and I went to a Thanksgiving celebration in Cedar Rapids.  Dad is no longer able to drive so we wanted to do a little socializing and get him out and about.  The Thanksgiving dinner we attended was started by a local dentist who wanted to ensure all elderly people would be able to have a turkey dinner.  Now that the dentist retired, the tradition has been carried on by the Aegon insurance company.  The celebration is in a festively decorated cafeteria complete with live music from the eras of fifties through the seventies.  The food was awesome and we both had some fun.  I can still taste the dutch apple pie with the THICK slices of apples…mmmm

Later in the afternoon I headed out to my buddy Tony’s house for another turkey dinner.  Tony used to be a chef at a company in town.  He was the king of pasta salads – Tony could make cold pasta salads a million different ways and they were the best!  He and I moved on to different companies but we have stayed friends.  Tony and his wife were cooking for their kids, friends, and relatives.  As predicted, the food was incredible.

I ate so much that I had to sleep some of it off.  When I went out to the van, I opened the door and this cute little barn cat entered the van.  One look confirmed that the kitty was a “she”.  I petted and hugged the kitty and she purred like an old Singer sewing machine.  After resting up, I went back in the house and hung out with Tony and Chris a little longer.

Temptation got to me and I returned to the food one more time.  The turkey, corn casserole, potatoes, dressing (with sausage and onions) etc. seduced me once again.  It didn’t help that I poured down 1/2 bottle of strong blackberry dessert wine as it if was a jug of kool-aid.  Tony’s daughter Elana confirmed that the kitty is a she and that her name is Figaro.  After a little break to play video games it was time to go back outside to sleep off the food and spirits. 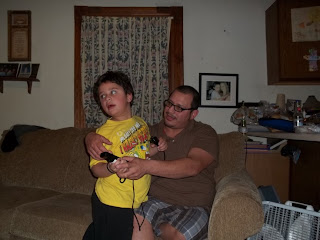 Tony and his boy Dylan playing video games
As I entered the van, Figaro jumped inside once again.  Despite my better judgment, I let her stay inside where she immediately curled up on the comforter.  The Vornado heater (which was set on the linoleum floor) was set on 71, thus warming the floor and keeping the van at a comfortable 74 in most places.  You would have thought that Figaro had died and gone to heaven.  She was so happy that she purred for as long as I could remember.
The little kitty curled up and slept in the comforter most of the night.  For the most part, she was an angel.  Figaro never went to the bathroom during the night (as far as I know) and she slept comfortably and quietly.  The only part that was unpleasant was the fact that she was equipped with “four wheel drive” and frequently scratched me around the toes and backs of arms, etc.  If I yelled OWWW then she knew to back off a little with the claws.  Overall though, Figaro was a good companion while we watched the Three’s Company TV marathon until both of us were sound asleep. 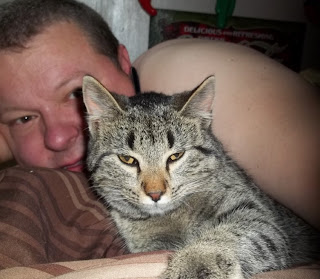 I got up this morning and said goodbye to Figaro. She really had liked the fleece “Snuggie” in the van.  (It’s one of those blankets with sleeves).  Unfortunately, the “one size fits all” does not apply to BIG guys so it was an easy decision to give it to her.  After getting a little more than a little choked up, I said good-bye to the little kitty and put the Snuggie blanket by where she sleeps under the porch of the house.  I told her I will be back one of these days to see her again.  She made my Thanksgiving happier; I hope I did the same for her.
Figaro also taught me something about vandwelling.   It’s difficult to have animals in a van.  My two long-term cats, Jessie and Serena are not the best van companions because they are used to a good sized house and are spoiled rotten.  Some day if I do the full-time vandwelling thing, it’s unlikely that I will keep a live animal in such a small space.  I would rather just encounter a Figaro now and then.
One last thought, I don’t know why a girl cat was named Figaro, presumably by the little girl, Elana.  I can tell you this – when she clawed my toes, I could have sang just like the Figaro opera song.  Go figure.  🙂
Have a great weekend everyone!﻿