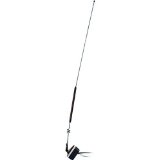 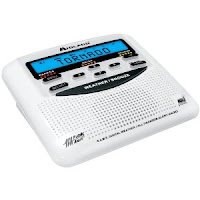 Midland 120B Weather Radio and Midland 18-259W Antenna – You Need Both
In Iowa it’s often said that if you don’t like the weather, just wait a few minutes.  Unfortunately, it’s not that far from the truth especially during certain times of the year.  It can be that volatile.
The seasonal transitions are often eventful and bear watching.  Though we don’t get the mammoth tornadoes you see in Oklahoma and other southern states, Iowa sees its fair share of nasty spring storms including all sizes of tornadoes.  In recent years we’ve had a few large twisters  and extreme straight line winds (non-tornadic) that proved dangerous and deadly.
I’ve been in a few difficult weather situations.  Several years ago I was fishing on a late spring day near Palo, Iowa, when the sky blackened very quickly.  I waited until the last minute to gather up the fishing poles but by then it was too late.  Tornado sirens sounded and I had to hot foot it out of there.  It hailed, the winds blew, and branches flew.  Only minutes later, a tornado touched down just a few miles from where I was – close enough I could see the funnel cloud.  That kind of thing was cool when I was a teenage ham radio operator who loved spotting tornadoes.  At forty-six, the perspective is a bit different!  Safety is a good thing.
With that in mind, my sister recently suggested looking into a weather radio.  Having one offers the advantage of programmable alerts for relevant areas.  You don’t have to be bothered with alarms unless you want to receive an emergency transmission for a county or two away.  The broadcasts come from the National Oceanic and Atmospheric Administration and I trust this source for timeliness and accuracy.
After some research the model chosen for the van was the Midland 120B, a well-respected performer.  It did a great job for us when I volunteered at a food pantry, other than the fact that the alarm startled a few people.  The Midland has decent reception and is quite capable of projecting both alarms and spoken audio at considerable volume and distance with excellent clarity.  Though I was a little biased, researched showed that this model was a solid contender with many happy owners.
I bought one from Amazon for $29.95 and after it arrived (with the free shipping), I learned that you can purchase one at the grocery store down the street for the same price!  Sure, tax was saved, but I would have preferred to buy local.  Oh well… The good thing is that the price is reasonable and consistent in most places.
Now installed, the Midland fit nicely above the bed and hangs from two screws.  I can be turned on and off with a switch and a button without having to get out of bed.  Yes, that’s lazy but at the same time, safety was also in mind, too!  Once programmed for the local station (162.475 MHz), no other action is needed.  It’s convenient but up and out of the way.
I added the necessary batteries for backup.  As long as the radio is turned off when not in use, the batteries hold up well.  When in use, I have an adapter that is connected to the house batteries’ twelve volts DC. The adapter converts it to 9V. Should I wish to take it along fishing, the weather radio simply lifts off the wall and unplugs for easy portability.  The telescopic antenna pulls in the signal pretty well most of the time.  Since most camping is done in the “boonies”, excellent reception is a must abut I found it was not always possible to receive the VHF signals without a little help.
As radio transmissions increase in frequency, the signal tends to be much more line-of-sight than something like an AM station which follows the curve of the earth.  To help correct for this problem, I ordered the Midland antenna that attaches to a window for mobile reception.  It works great.  The outside mobile antenna and inside base both glue to the window with a 3M type sticky adhesive already part of the mounting.  The directions recommend heating the glue using a hair dryer.  Lacking such an appliance, I made do by removing the protective tape, and heating the parts with glue over the Mr. Buddy propane heater.  After a few hours, the antenna and base were strongly adhered into place.  A coaxial cable runs from the inside of the back door window to the radio.  A couple of super magnets help hold the blackout curtain over the base and cable to ensure no light leaks out.  The antenna itself is stealth-friendly.  Not only can the whip be tilted down, it can even be unscrewed when not in use.
Reception is now excellent using the antenna and radio pair.  While the radio itself is very highly rated, a few people complained about the antenna’s reception or mounting.  Just follow the instructions for securing the antenna and don’t expect the radio to receive a signal inside a cavern.  You should be good to go.  Even where I could barely get any signal before, a solid signal is now obtainable.
If you are in the market for a mobile weather radio and outside antenna, I would recommend the pair.  Combined, they cost me less than $50.  That’s a small price to pay for a little extra safety in case of bad weather.  Of course, no radio will replace common sense, either.
I plan to go camping during a winter weather event and look forward to testing the weather radio.  Those impressions will be passed along.
Have fun.  Thanks for reading.

2 Responses to Weather Radio – A Helpful Addition for Tornado Alley