Today was another day for a little adventure in the van.  With the casino earnings and two $100 BP gift cards, a little camping expedition seemed like a good thing to do.  In addition to sharing information, it’s fun telling stories, too.  There are several reasons for that.

If you haven’t guessed it yet, one of the reasons is that I like to write.  In college I was an A student in the English compositon classes… Where did I go wrong after that?  LOL.  But seriously, it’s enjoyable to write, particularly if someone can get some entertainment or learning value from such ramblings.  I love reading others’ blogs for the same reason.

There is another purpose for sharing these experiences.  I want to convey how FUN it is to roam about even if it is only part time.  Do you remember Dave Atell from Comedy Central?  He used to love to prowl at night and show up in random places, having one adventure after another.  It’s like that with the van.  It is a blast!  I want people to come away with the idea that you can live more of your life with fewer possessions.  You focus more on people, scenery, animals and such.  Life is too short and many do not take the time to relish it.  It’s worth the sacrifice.    (that’s HTLM for “End Sermon”)…

Speaking of an enjoyable existence, tonight I ate at a favorite place where I used to work.  Until I moved to Dad’s, many hours were spent helping friends at a little Mexican restaurant.  Sadly, this little “ma and pa” eatery finally had to close its doors after a few years.  Look at the bulging Carhartts and you can tell they gave me a lot of free food in return for the hours spent translating all kinds of business documents.  The space was remodeled and a new restaurant opened that is much fancier and better than ever but without my dear friend at the helm.  It was a bittersweet change.

The new restaurant is called Los Molcajetes.  I might have mentioned it in another post but don’t recall.  I know all the staff and like to visit now and then.  With the casino proceeds, it was only a matter of time before feasting on the seafood “molcajete”, their signature dish.

A molcajete is hand-carved from volcanic stone.  It is a sort of mortar and pestle you will find in Mexico where this implement grinds spices, corn, etc.  It is also used to serve a most delicious dish which often has steak, chicken, and shrimp or is a seafood (mariscos) entree.  I had the mariscos molcajete which included crab legs, shrimp, tilapia fish, queso fresco, nopales (cactus paddles), green onions, rice and beans, etc.  It is to die for.  The lava-like reddish orange sauce continues to boil in the pig-shaped molcajete for some time after it is served. 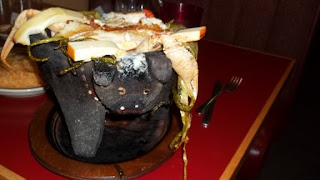 This is not the best picture but I wanted you to see the pig shaped implement.

I named her Senorita Cerdita (Miss Piggy) after our favorite outspoken muppet. 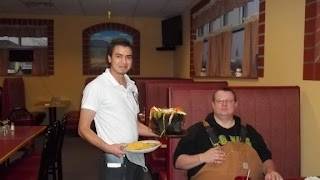 This is the masero (waiter) Rigoberto whom we call by his nickname “Cadires”
After that big molcajete dish, there was no room for a flan or sopapilla dessert.  There was so much left that I was able to box up half of it for tomorrow.  The box is going to go in a Rubbermaid container on the roof – a pretty safe place where the animals probably won’t get to the food.  It will make a good breakfast along with a Diet Coke or four.  Of course, don’t put food on the roof if you are near bears.  We don’t have any (well, not many) bears in Iowa but hungry barn cats can be destructive, too.
While at the restaurant, Cadires, the waiter, asked me to upload some photos to his Facebook account.  That meant another stop because the Hills campground does not have Internet access.  A stop was made at the Java House where I had a delicious pot of Earl Grey tea.  Had it not been for Captain Piccard (Star Trek Next Generation) I might not have tried this delicious back tea back in the early 1990s.  It’s good stuff, particularly if you add cream.  The Java House tasty baked treats.  A popular place to study, there were lots of energetic college students chattering in the background.  Christmas music played softly from ceiling speakers.  All seemed peaceful and I was enjoying myself until I saw her… an older lady who looked alone.
I inquired about who the old lady was and a young girl told me her name was Mildred and she was always there.  The poor thing is frail and quite thin.  She seemed to keep to herself.  I said hi but she seemed distant, not answering me.  I couldn’t help but notice the red hat.  She was obviously part of the senior citizens group who haunt local restaurants.   Some of them are nice ladies but a few earned the group the nickname of the “Red Hat Mafia”.  If you mention the red hat ladies, many food servers will shudder and tell you horror stories about some of “The Red Hat Mafia” being extra picky, not tipping, etc.  Fortunately, Mildred was one of the nice ones.
Mildred didn’t speak an unkind word about anything and that was comforting.  I wished she was younger because I thought we really clicked; it seemed we both thought on the same level.  I asked the staff to take my picture with Mildred and the employee was accommodating.  Mildred didn’t mind a bit and she really seemed to like to have someone fuss over her.  Here is a picture of the sweetest little old lady you will ever meet. 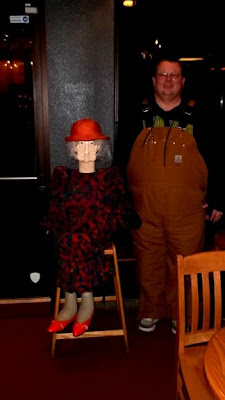 The Sweetest “Red Hat” lady you will ever meet!

After the Earl Grey tea and a brief one-sided conversation with Mildred, it was time to depart.  I headed to the campground for another peaceful night.  God Bless you Mildred for making my day a little brighter.  Some might think you’re a dummy but I’m sure after this post, some will feel more so about the author too!

Have fun… Enjoy life… Play a lot… Relish being eccentric.  Remember it is good NOT to be ordinary, or as I call it “boredinary”.  See you in a week or two, Mildred!

6 Responses to Miss Piggy, Molcajete, and my New Friend Mildred