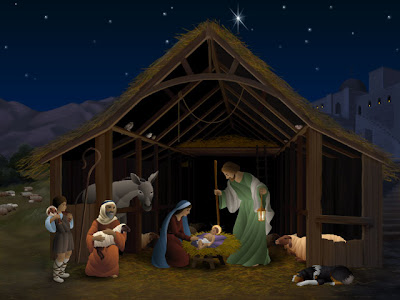 “And there were shepherds living out in the fields nearby, keeping watch of their flocks at night. An angel of the Lord appeared to them, and the glory of the Lord shone around them, and they were terrified. But the angel said to them, “Do not be afraid. I bring you good news of great joy that will be for all the people. Today in the town of David a Savior has been born to you; he is Christ the Lord.”

I noticed a couple of things in this scripture that many of us can identify with.  Obviously, there is no greater message than the birth of Jesus and the Salvation He brought us because His is the only gift that really matters for all eternity.  But if you are like me, you might have noticed something else relevant in this Biblical passage.
It occurred to me that God doesn’t seem to have a problem with people living outside.  He can work with shephards, fishermen, or even vandwellers.  Jesus doesn’t care if we live in mansions, motorhomes, or in cardboard boxes.  It’s what is in us – not what we are in – that matters most.
The other part of the passage that we can identify with is the part about the bright light that shown upon the shepards and must have frightened them.  From camping in a van, I know there is almost nothing more scary than to be startled by a bright light such as when approached by the police.  Back then there were no man-made electric lights so such illumination would have been even more terrifying.  I can only wonder what the shepards must have thought before being told “Do not be afraid.”
Those are my few little Christmas thoughts.  Be happy this year and thankful for the blessings and Salvation we’ve received from God.  He’s given us more than we deserve.  Remember that even though some judge us by how we look, what we wear, or where we live, it’s only that final judgment that really matters.
I would remind them that even our Savior, Jesus Christ, had to spend his first night living outside due to circumstances.  God loves us all.
Merry Christmas to all and God Bless you in the coming years.
Bradford – the Van Trekker