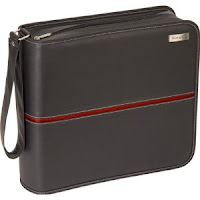 The Targus Matrix 240 CD/DVD Storage Case
Check out my cheesy homemade video about the storage case!
Here is a video (in MP4 format) on You Tube:
CLICK HERE ====>   http://youtu.be/ZEuu6poQAfQ
Looks like the neighbor’s SUV got taken out in the making of that video!
(These videos were made using NCH Video Pad Editor Pro – testing it out)
I am a movie junkie and also love old TV shows.  It’s amazing how fast DVDs accumulate.  The collection seemed to grow even more rapidly during manic phases… Somehow all these videos multiplied into five overflowing cardboard totes in Dad’s garage.  Since the effort is to live in a van, somehow the movies and TV episodes had to be consolidated into something more manageable.
The choice of a 240 CD/DVD case was somewhat arbitrary.  At one point I had about 500 DVDs, some of them were purchased, some were copied from cable TV.  Some were good; some were crap.  It seemed like if I went through them all, there is no way more than 250 of them would be kept.  Since this case held 240, it seemed like what was needed.  The five star rating on Amazon clinched it.
The case arrived quickly and I am delighted with it.  Each pocket was large enough that it was possible to cut a little piece of the movie insert and slip it in with each DVD.  Then you throw the plastic case in the recycle bin or donate all of them to a thrift store.
The system I used for grouping movies included comedy, drama/action/thriller, and superheroes.
Working from the back, I added all the superhero DVDs:  The Greatest American Hero, Wonder Woman, Lois and Clark, etc.  The plan is to add the Six Million Dollar Man collection, too, as it is purchased.  It will be added as I work toward the center of the book.
In the front of the album I placed the comedy/lighthearted drama movies.  Rather than organizing them alphabetically, they were organized with the favorites/most watched toward the front.  That solves the problem of needing to keep them in a certain regimented order.
I added a tab for the next division – Action/Drama.  A little space was left for expansion of the comedy section.  The same thing for this section.  Favorites were forward of those less watched.
Now there is plenty of entertainment available in a small space.  There was had a piece of wasted space just above the Blu Ray player under the kitchen counter.  What a perfect location for the movies.  It fit like a glove and a little door covers both the player and the movies.
Have fun.  I apologize for the cheesy video… I have been testing some new video editing software and was having too much fun simulating “Bewitched”… Thankfully you didn’t hear my “Uncle Arthur” impression.
Have fun!