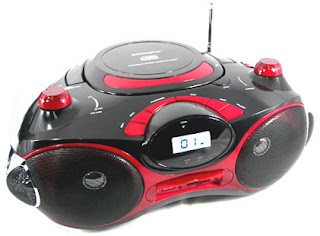 With SD, USB, and MP3 inputs who needs CDs?
I love listening to a variety of rock, jazz, and bluegrass when exercising, working, fishing, or just chillin’ in the van.  Until now, the setup was a simple Sansa MP3 player with the output piped into a set of amplified computer speakers.  Fidelity was borderline, at best.  Some kind of better solution was needed for listening in the vehicle.
One night after using the MP3 player, I gave some thought to what would work.  Though a hardwired stereo and speakers would look cool in the van, that approach offered little flexibility and required precious space to be dedicated.  Because of the desire to fish and do other things outside, I wanted a portable solution that offered enough volume and the ability to listen to an AM/FM radio as well as MP3s.  Battery power was also mandatory which was not an option on the larger models.  I love the big Sony radios but I didn’t need a bazillion watts, either.
I searched for boomboxes on Amazon for quite some time.  Few radios were rated highly unless they offered IPOD docking capability.  Those models were often expensive.  Some of the lower end units had cassette tape capability – something of no interest to me.  What I did find of interest was a little Chinese boombox (sold under a variety of names including QuantumFX J30R) that offered USB, MP3, and SD support as well as being a CD player and radio.  It also included a remote. This unit was not the most highly rated product, particularly because of some quirks with the CD player.  I ordered one anyway because I don’t even use audio CDs.
The little red “ghetto blaster” (do they still use that term?) arrived today.  I plugged in the Sansa Fuze MP3 player and, as promised, it played the MP3s just fine.  An SD card was loaded with the same bunch of MP3s.  It was plugged into the dedicated slot in the front of the Quantum.  That worked just as well.  In fact, it sounded quite crisp and cranked out lots of volume.  Cool beans because reading an SD card takes less power than running the motor to twirl a CD.  Batteries should last longer in the SD mode.
Overall, I like what this little boombox does.  It’s not fancy and it feels like it was made inexpensively though the styling is quite attractive.  The tuner is analog and there are no adjustments for sound quality but yet it sounds pretty decent.  The SD, MP3, and USB features eliminate the need for CDs and the problems that come with them.  It will be interesting to see how this radio performs in the coming days, but so far, so good.  The Quantum was worth the $57 bucks I shelled out for it.   It saved me a lot of time, money, and space as well as adding flexibility.
﻿

2 Responses to A New Radio Adds Features and Saves Space