By VanTrekker | January 10, 2012 - 7:57 AM |January 10, 2012 Uncategorized
0
SHARES
ShareTweet
Healthy pizza cooked in the van.  Life is good!
Today I added a little toaster oven to the Trekker Van.  With more cold Iowa weather on the way, I didn’t feel like messing with charcoal or firing up the butane stove and cooking outside.  The microwave heats things nicely but like any microwave, it’s no substitute for a real oven.
Today while making lunch at Dad’s, I fell in love with his little white toaster oven – a Christmas gift from me a couple of years ago.  It is perfect for small space applications like this! 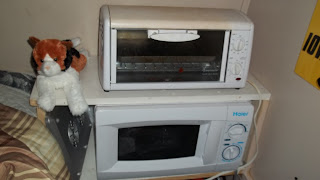 This afternoon I bought a clearance priced 2-slice Hamilton Beach toaster oven but then didn’t like it too much.  It was too dang small.  Grrr.  I traded the new one with Dad’s – his was a slightly larger 4-slice model.  The new addition fits nicely on the shelf above the microwave as you see in the picture.   Dad liked the 2-slice model better since he tends to just toast bread, etc.  I want to cook, bake biscuits, cookies, etc.

As far as words of advice… In this case, size really matters.  If you decide to get a toaster oven, make sure it is big enough.  The 2-slice models are cute but you can’t cook much in them other than a couple pieces of bread or some chicken nuggets, a battered fish fillet, etc.  Though 2-slice ovens draw less power (around 800 watts vs. the 1200 watts of a 4-slice model, the loss of functionality really sucks.  There are many different features and price ranges, but I saw some really awesome 4-slice ovens for $20 to $40 on the market.

This toaster oven is a Toastmaster 320.  Dad seldom used it so I’m tickled to get something used, recycled, etc. He was happy to get a new one in trade.
The only real downside to this method of cooking is power consumption.  Since it draws a hefty 1200 watts at 110V, that would translate to over 100 amps/ hour if I was using the inverter – probably closer to 130 amps/hour.  The 2500 watt inverter could easily handle it but it would be frigging brutal for the batteries.  You pretty much have to have a source of 110 volts.
So what if there is no shore power?  The butane stove or charcoal will get used for now.  This spring I plan to buy a 2000 watt Yamaha generator.  No problemo as long as a person doesn’t try to run everything at one time – you can shut off the space heater for a while.  For the heat that the oven kicks out, it warms the van just as well as the space heater.
After deciding to use Dad’s toaster oven, it was time for dinner.  Tonight’s pizza included a whole wheat tortilla, some cheap pizza sauce, tiny amounts of six different meat and cheese toppings (from the grocery store salad bar), and two ounces of mozzarella.  It was about 400 calories, 18 grams of fat, and cost about $2.50 or so to make.  It tasted as good as it looked!
The oven toasted the pizza in a few short minutes.  The machine got a little warm on top but there was a lot of vertical clearance and the ceiling stayed cooler than when the Mr. Buddy Heater runs.  The spaces to the side and back did not get overly hot, either.  Nonetheless, I would recommend not leaving the oven run unattended.  The mascot, Douglass, sat at a safe distance and enjoyed the warmth.  My sister and brother-in-law gave me the little calico mascot cat. 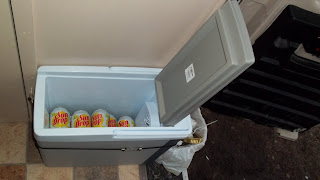 Here is one more picture to pass along.  The Koolatron arrived and is now sitting on the floor to the right of the bulkhead.  I have it strapped into place.  (Please excuse the little trash container to the right).  I ran the cord under a little gap that I left between a back corner of the bulkhead wall (near the door) and the floor.  An outlet will be added to the front of the bulkhead so I can plug the little fridge into the house batteries (which sit behind the seats).﻿

These small changes are continuing to make the van feel more and more like home.  Now there is a small cooler to carry food and a nice little oven for cooking healthy meals.  Better yet, imagine bringing along a little cookie dough or some Bisquick… well, at least where there are no bears around.
Yes, by the way, that’s Diet Sun Drop.  It was half the price of Diet Coke… I’m down to three cans a day (instead of a gallon, plus!)
Other than a few things planned for outside the van, most of the stuff I wanted to do inside the van have been completed.  Now it’s a matter of waiting till spring comes.  It’s going to be a wonderful 2012.
Take care and thanks for reading!

6 Responses to A Toaster Oven Makes Cooking Easy and Fun