By VanTrekker | January 13, 2012 - 2:22 AM |January 13, 2012 Uncategorized
0
SHARES
ShareTweet
Thank goodness… It finally snowed… Only a couple of inches was predicted for the area I live in so the van and I went to find the heavier totals.  It was the perfect time to check out Swiss Valley Park, a state facility just a couple of miles outside of Dubuque, Iowa.  Despite monitoring the weather radio, I stayed a little too long and got stuck for a while and had to drive home with white knuckles.  It was a fun trip though! 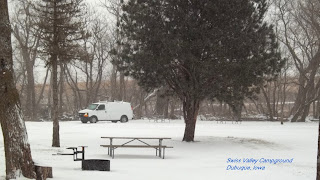 Swiss Valley is a beautiful park nestled in the rolling hills of northeast Iowa.  The campground has showers, electricity, a playground, trout fishing, and even modern bathrooms… well, at least the facilities are available till October…

The campground itself is open year ’round if you don’t mind self-registering and going to the bathroom in an old style, one hole shack.  Just to the right of the picture is bathroom… When you are the only one in the campground, you can park by the crapper! 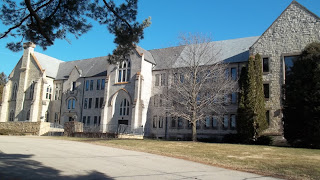 The Swiss Valley area is located very close to the New Mellory Abbey, a monastery near Peosta, Iowa.  Many years ago, the family and I used to visit the monastery where the monks baked the most delicious homemade bread.  That tradition has fallen by the wayside, however there is a still a wonderful gift shop.  I bought some candies made by the Sisters of the Mississippi Abbey which is just a few miles  down the road.  I know what you’re thinking…

The candies are consumed ONLY in moderation.  I also bought a cute little wooden cross on a leather string. By the way, that picture was taken on Tuesday.  The temperature was in the upper 40s. 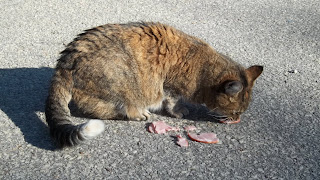 While at the Monastery photographing the building, I heard a tiny “mew”… It was very faint and it seemed to be a figment of the imagination.  One again, I heard a definite little “mew”.  I started talking aloud saying things like “I know there’s a pretty little kitty around here somewhere.  Are you hungry?”

With that, a well-fed cat tentatively inched forward from behind a car.  I opened up the Koolatron and brought out some pieces of Canadian Bacon.  The kitty loved them.  At first, he was nicknamed “Trapper” after the Trappist Monks.  But then it became apparent that this was a girl.  I named her Mona after the first four letters of the word monastery.  Mona appeared to be well fed.  The monks put food out for the cats.

You can see in the earlier pictures how beautiful the weather was.  It was soon to change.  The forecast was for about four inches of snow with the Dubuque area right in the path of the storm.  I was pretty excited because this gave me a chance to isolate myself and cook, read, sleep, etc. in total peace and quiet.  A trip into town was needed to fill the van with gas, make sure the food was stocked up, etc.  When all was in order, I ventured to Swiss Valley.  Here is how the campground looked yesterday. 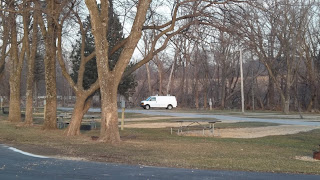 Wednesday night’s dinner was Canadian Bacon pizza cooked in the toaster oven.  It tasted good in the cold outdoor air.

I had settled down for a tranquil evening watching TV and then discovered the only station available was the Christian Broadcasting Network.  Nothing wrong with that… Sure, there was a conservative leaning but it seemed a little refreshing after watching so many secular shows on Fox and other TV networks.  The trip was about getting away from it all.

Overnight the weather worsened.  The temperature had been a record 50+ degrees before a sharp cold front passed through.  By early evening we were down to about 24 degrees and steadily dropping.  Inside the van, the temperature remained about 76 degrees, warmer than what we keep it at in Dad’s house.  Despite cold winds buffeting the van, I still slept like a baby.  During the early morning hours, the temperature dipped to 14 degrees accompanied by strong winds.  It’s not as bad as some years but still cold, nonetheless. 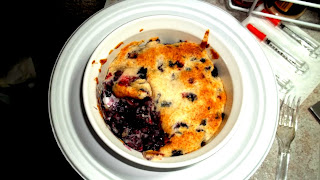 This morning I got up early and checked the snowfall.  Then I made a little breakfast cobbler – something I thought up a few days before.  The local grocery store had a pouch of Betty Crocker instant triple berry muffin mix.  It was a “complete” type mix – just add water.  I put a whole 6 oz box of blackberries in a small dish, topped it with half the mixed up package of muffin batter, and baked it in the toaster oven.  It was awesome… a little high in carbs, but to die for.  If only the smell could be bottled.
Unfortunately, the weather deteriorated quickly and the “winter weather advisory” became a “winter storm warning” so I had to try to depart a little earlier than planned.  Swiss Valley Park has several roads leading out of the campground but all are up very steep hills.  I tried and tried two different directions of a paved road, only to slide back down.  Despite having decent tires, the hills of the unplowed roads were too steep.
A sheriff’s deputy came along and we chatted for a bit.  He recommended trying to climb out on a gravel road for better traction but warned that up ahead several cars – including a squad car – were stuck.  I climbed the first hill and watched as a plow came through and cleared a route.  An Impala still could not get up the hills even after the snowplow went through.  I slid back, too.  The only way to get past each hill was to start at the top of the hill and go like a bat out of hell to the bottom.  I had no worries about the front end.  It’s got new tires.  The back end of the van has highway tires and didn’t like to stick too well.  Nonetheless, after driving at dangerously high speeds, I was able to crest each hill and get the hell out of the area.  Note to self:  get new back tires next year.
It was a fun trip and very scenic.  The van performed perfectly and some recent changes made to block air leaks kept it toasty and comfortable.  The Koolatron kept food nice and cold and the toaster oven made tasty meals.  The new little boombox provided great sound from the Netbook’s collection of music videos.  Best of all, we finally got some snow.  That made it worth the trip!

8 Responses to Finally, Some Beautiful Snow!