When You Live Outdoors You See More Outdoors 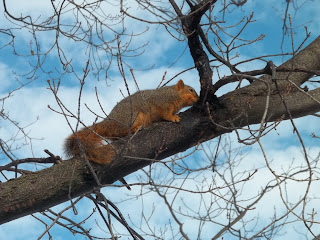 Nothing like fresh maple syrup (or sap) in the morning!
Over the last few days, I’ve been a little discouraged and at times felt like an outsider or an anomaly.  Many of the people I thought were friends have fallen by the wayside.  If anything, it’s shown how shallow many relationships truly are.  A few close to me have stuck by and those friendships have gotten stronger but most people have become distant.  If you want to lose friends (mostly people were never really were true friends)  then let them find out you are sleeping in your van.  Even if you keep it pretty quiet, word gets around fast.
I recently spoke with a person who asked me if I live in my van.  I explained that it’s at least five days a week for now.  In the summer months I like to go various places, fish, and camp.  During the winter months, the van sits in Dad’s driveway and is used as an extended bedroom.  The gentleman seemed rather shocked and asked if I’d not rather have a house.  I told him no, this is cheaper, more comfortable, and there are no bills to pay.  He shook his head in disbelief – a sign that he was judging… or envious.
That was the reason for the slight mood hiccup the last few days.  Nobody wants to feel like a freak.  It really doesn’t matter though.  Some day I will leave this state and few, if anyone, will remember me.  That’s a pretty comforting thought!
Despite being a little down, today something happened that made me stop and count the blessings for a wonderful, closer-to-nature type of life.  As I worked on cleaning out the van, a chubby little squirrel sat in the maple tree overhead gobbling moisture from the branch.  Then it occurred to me that there was no melting snow… he must have been slurping up the sweet maple sap from the tree.  I watched this industrious little critter as he consumed quite a bit of the gooey stuff, even hanging upside down to get a few licks on the crotch of the limb.  Yum!  I like maple syrup too…
Then it dawned on me.  This is what life is supposed to be about… Seeing, learning, marveling,  feeling, and sharing… 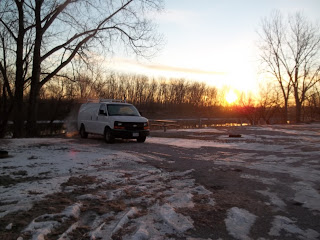 Let me tell you another story.  One day after camping at the Hills Access Campground (pictured to the left), I was passing through the town of Hills while on the way to Highway 218.    On the opposite side of the street was a yellow school bus with flashing lights and an extended “STOP” sign.  I waited as a lengthy line of children filed into the bus.

A number of the kids patted a white and brown dog on the head.  The dog’s tail (and his whole rear end for that matter) wagged.  After the last kid boarded, the dog sat down but remained at attention, as if performing the most solemn of duties.  The door on the school bus closed and as it drove away, the dog turned around and nonchalantly trotted down the street.  His work was done for the morning because he had watched over the children and had seen them off.  It was something wonderful to witness.

Being able to appreciate things like the “sap happy” squirrel and the school bus dog is something that many people don’t get to experience.  It’s so important to view scenes like these because it touches and heals us in places that medication and other substances cannot fix.  It’s good for the soul.  It’s also addicting in a positive way.  It makes you want to live in this awareness all the time.
When I was a teen, Mom allowed me to skip school (excused) and we went to a park in Cedar Rapids for a picnic.  We cooked using a 1980s “newspaper grill” and roasted some hot dogs.  I remember we had so much fun that Mom decided to quit her job and take a new one.  Being outside and enjoying the experience helped Mom make a positive change and go a new direction.
I started to feel this peace, energy, and joy from the time I decided to get a van and build it out.  It gives a person purpose.  Even if you are still locked in your old ways, just knowing you wish to fix what’s getting you down and having a plan gives you hope.  That’s good because most people who are depressed feel hopeless and helpless.  With hope, you know you can help yourself and that can eradicate many depressive feelings.  Been there, done that, and took all the meds, too.   🙂
If you are thinking about becoming a van dweller or simply wish to increase the amount of time you spend outdoors, just do it.  Go somewhere, watch nature, and enjoy your life.  Make a plan.  Have fun!
Please let me know if you have had any such memorable experiences… something small… a little aspect of nature that made you sit back and say “It’s worth it.  I love life.”  Maybe it was a rabbit, a dog, a stream, or maybe the smell of a fire or a noisy rainstorm.
Have a great day!
Brad

7 Responses to When You Live Outdoors You See More Outdoors