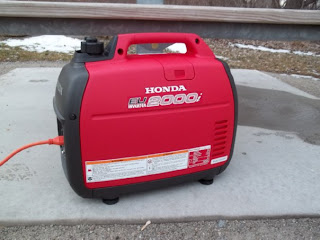 The new Honda was tested last night at the favorite campground in Hills, Iowa.  As has been the case most of the winter, nobody else was there.  That’s fun because it lets me get a scenic spot right by the Iowa River.  A location with electricity was chosen because the idea was to run the electric space heater without the use of the generator should there be a problem. 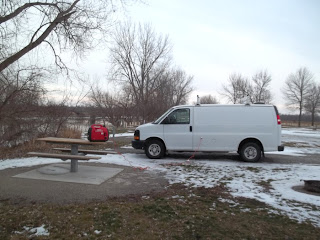 Here’s a pic of the Trekker Van and Lil Red, the new generator.  (Used to be called “Jenny” but from a suggestion from “Bob” it’s been renamed)  I’ve got the umbilical cord stretched from the generator to the shore power inlet.  In retrospect, it seems a little unwise to have located the power inlet so close to the fuel filler but but it’s because of the place chosen for the inverter.  For safety reasons, the power cord is connected first to the van and then to the shore power source.

One tug on the cord and Lil Red started right up.  After warming it up, I plugged in the van cord to top of the batteries a little.  Then I switched on the Eco mode and the engine quieted substantially.

The test came when it was time to cook supper.  With the umbilical cord connected, the toaster oven was fired up and the 1200 watt load caused the Honda to immediately kick up the engine RPMs.  The noise level did increase but it was not too bad.  You could hear it but I wouldn’t say that it was offensive.
I’m not sure if I will run an air conditioner in the van.  If I do, there will be more camping trips at different locations where I’m not close to other people.  Then again, if an air conditioner is used in the campground it might be easier to use their power. 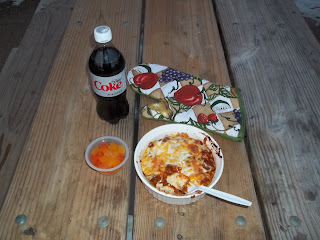 Last night’s dinner was fairly healthy – one goal of this year’s van treks.  For this little dish, I started out with Betty Crocker complete cornbread muffin mix and a can of Turkey Chili.  It was the first time trying both products.

A hearty meal was not a problem after having exercised and also eaten lightly during the day..  Half a pouch of the corn muffin mix was about 300 calories and then 200 more for the half can of chili.  I added  another 80 calories for the melted, slightly browned, yummy cheese.

It was pretty easy to make the cornbread.  I just mixed water into the powder and baked the batter in the dish in the toaster oven till it was set up but a bit underdone.  Then I added the chili and cheese and finished baking it.  Doggone it, that tasted good!

I love the heck out of that darned little toaster oven… It’s nice to be able to run it now any time and about any place I’m camping.  (exception = stealth)
So what was learned about the generator?
WEIGHT.  It’s heavy, especially when full of gas.  It’s amazing how a few pounds can be a bitch to carry when you are moving it in and out of the van.  Hernia City… In the future, it’s going on a rack on the back of the van.  This spring I am going to have to add a trailer hitch receiver anyway… The plan is to carry the generator LOCKED DOWN on the back of the van.  A little doghouse will be built to cover it for protection from rain and peeping eyes.  I know what you are thinking – having the generator visible is not stealthy.  I don’t plan to do much stealth camping this coming year… It’s fun but not something I really want to do unless I have to.  The plan is to camp at river accesses and campgrounds.
WHEN TO USE IT?
As anxious as I was to get this generator, the idea is not to use it unless necessary.  If I can mooch or buy power different places, I will go that route.  If a campground charges $5 more for power then why not go that route than using precious generator hours and paying $3 or $4 a gallon for gas?
WORRIED ABOUT THEFT?
As one reader pointed out, theft is a big concern.  People love to steal Honda anything… (The Honda Accord is a favorite among car thieves)  I’m already thinking about mostly using Lil Red in uninhabited areas.  We have a lot of those in Iowa and I plan to frequent them.  I’m already thinking that it would be best to keep the generator in plain sight most of the time – even locked.
WHAT ABOUT SOLAR?
A little later in the year a solar array will be added piece-by-piece to help keep the batteries charged up.  That’s energy that can run for free with no worry that it will run out.  I believe both sources are needed.
Make it a fun day and thanks for visiting and commenting!
Brad