How Does Your Battery Bank Measure Up? 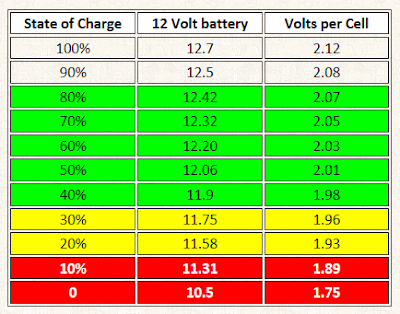 Does your lead-acid battery have you seeing red?   Hopefully not!
DISCLAIMER:     First of all, I am not an expert in battery technology though I have a strong technical background in electronics having been an electronics tech for about eleven years.  This information might be worth what you paid for it but I believe it to be accurate…. 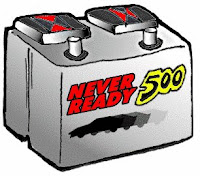 For those of us who depend on camping or living in a van, few things conjure up as much dread as thinking that the deep cycle batteries on-board might be going bad.  Perhaps it’s just a fear of the unknown…. The dreaded “What if?”  Maybe this fear is because for many of us the batteries are second in cost only to the van itself.  Last night I decided to tackle that phobia and test the AGM batteries in the Trekker Van.  Some learning took place along the way.
So what was I so nervous about?  The place where the batteries were purchased had received crappy reviews on the Internet.  I didn’t know this until the two 8D batteries were acquired.  I had been worried since then.  I guess it’s true – you don’t always see compliments when a business does a good job.  People who mistreat and ruin their batteries often blame the vendor.  Add a little bit  of lousy customer service in there and people will cruficy a store and its employees…  Fortunately, it appears the batteries are working even better than planned.  I should not have doubted – they were made at a good factory.

This was the experiment…

First, I decided to disconnect the Iota charger and let the batteries settle down to their nominal voltage.  I let the batteries supply a small load of a little over an amp.  After a short time, the voltage dropped to a perfectly normal 12.7 volts indicating a full charge.

Then the TV, lights, etc. were run in an effort to represent a normal night.  The current draw should have been as follows…

Here is what was learned…

1)  Within reason, a slower discharge rate can make your battery perform about 20% better than the 20 hour discharge rating.   Most of us are brainwashed into referring to our batteries’ capacity using the 20 hour number but in reality, capacity can be better than this number… analogous to getting better gas mileage by not driving a car quite so hard…  Battery efficiency is somewhat dynamic and can change quickly depending on usage (which can change internal resistance).  One caveat… If you discharge the battery too slowly, it can develop the problem called “sulfation” which is kind of like a car getting “carboned up”…  You don’t want to run just a flashlight and a laptop off of a 225 Amp Hour battery!
2)  Since first estimating battery needs, a few things have changed.  I decided not to use the microwave on the battery bank just to save wear and tear on the costly batteries.   One thing I did do right was to consider all of the items that might simultaneously be run from house batteries.  It can vary depending on the season.  The Trekker Van will use a lot more current during the summer with multiple fans blowing.  It’s also reassuring to know that the CPAP machine will not run out of juice during the night.  Extra capacity was planned and it was a good thing.

3)  The batteries currently in use will be perfect for a solar “top off” in the future.  I’m looking at putting 180 watts of solar panels on the roof.  The house power reserve will be charged some during the day and drained some at night.  Now that I know the drain is not excessive, they batteries should last quite a while by keeping them fully charged and gently drawing power from them.  They should always be in the high “green” range which is definitely where you want them.  Shore power (or the Honda generator) might not be necessary too often!

4)  Food can be kept cold now.  The Koolatron current draw is not excessive.  That’s a good thing.  It means cool (though not icy) Diet Coke this summer without fear of battery problems.  Had their not been extra capacity factored in from the beginning, it would have made the cooler more difficult to justify.  I lucked out but would encourage newer people to consider future use.

5)  I plan to add an onboard voltmeter in a place where I can monitor the battery levels at all times.  There are cute little LED or LCD voltmeters you can buy online for less than $20.  They can be mounted to the bulkhead wall or anywhere else.  I’m a nerd and like having stuff like that around.  It might help me trust the batteries a little more.
So what recommendations would I make to people doing conversions?  Think big but not humongous.  It would be better to buy a little too much house battery than not enough.  If you’ve got the space and can afford it, you really do get what you pay for.  Plan for future needs.
Have a good one!