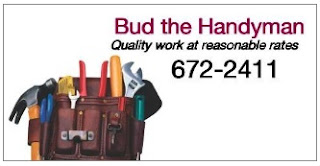 Magnetic signs such as these can help you blend in.

I just ordered a couple of signs as a reward for reaching the 25 pound milestone.  It’s been a lot of fun.  Some of the weight loss so far has been fluids but a person’s ankles are happy to lose any weight put on them!  It’s been relatively easy and a good momentum has been started – reason to celebrate.

The #2 milestone reward was meant to be a “want” rather than a “need.”  One of the tools I really wished to have on board the van was something to act as a decoy for street or parking lot camping, particularly during the day.  My psychologist once told me of a man who lived in his van and used magnetic signs as a “cloaking device.”   With his vehicle marked as a handyman’s truck nobody bothered him, thus the Star Trek reference “cloaked” to refer to a sort of man made invisibility.

Above you see a sign that was customized from a template – one of thousands available from different online companies.  The actual signs I ordered are much different from the example.  The layout chosen was professional looking but used very reserved colors (blues and greys) with nothing too unusual or flashy (such as a cartoon or cute picture) that might draw extra attention.  For this application, I wanted a sign so unremarkable that the van would likely be dismissed as just another work vehicle.  Some people might even not consciously read the new sign – all the better!   For privacy reasons, I have elected not to show what was ordered.

The cost for the two signs (45 mil, heavy duty material) was $41 including shipping).  That’s not a bad deal.  The decoy magnets can pay for themselves in just one night if it saves you the cost of a motel room.

Now on to the fifty pound milestone!  After reaching it, I intend to take a three day trout fishing trip with at least one of those days stealth camping.  It will be some time in May.