Who Are You Calling a Shrimp???? 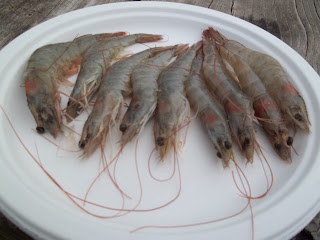 A few fresh crustaceans can make even a curmudgeon happy!
It was bound to hit sooner or later – the winter blahs… Although the unusually warm Iowa winter has been wonderful for van camping, it’s taken a toll on the mood. Nearly every day this winter has been warm – often at or above freezing.  What little snow we had was short-lived.   The end result is clouds and fog and the dreary look of November or December.  Though I don’t like bitter cold, at least when we have it the skies are clear and the sun shines.  The lack of sunlight has been a little depressing, especially for those who have seasonal affective disorder.  Mom simply called it “cabin fever.”

It took a little self-therapy to venture out.  Since so many venues are closed at this time of the year and the fish aren’t biting, I decided to do something comfortable for the driver.  Just a nice quiet trip with some good food and a good book would have to suffice.
For convenience sake, it was decided to visit to the usual campground but cook something fun and new.  The salad bar at the HyVee grocery store yielded an unusual treasure: pea pods in addition to the normal veggies.  Thanks to a $1 off sticker, I had some Aldi’s discounted pork loin and decided to make teriyaki pork with veggies for dinner.  Well, at least that was the plan.

On the way to the camping spot, I made a quick stop.  at Chongs Market in Coralville, Iowa.  It’s sort of the mother of oriental grocery stores.  They also have a lot of middle eastern goodies, too.  I usually stock up on cans of Moroccan sardines and Asian dried squid jerky… It’s fun stuff to nibble on. 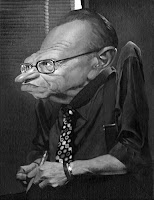 Toward the back of the store was a display of assorted veggies. I selected a bundle of green onions and that’s when I saw them… Fresh shrimp for $5.99 per pound – not a bad price!  They were quite large and rather beady-eyed.

I bought ten of the shrimp but had to throw one back… It seemed to have the most intense look – almost as if it was staring at me.  For a second I feared some kind of a political interrogation using loaded language.  Of course, any resemblance between the beady-eyed shrimp and a talk show host is purely coincidental.

Back at the campground, the temp was hovering at 32 degrees with a moderate breeze blowing.  It was deceptively chilly; a person had to work fast.  I had not popped the heads from shrimp for many years and it was a a fun exercise.  Unfortunately, the cold quickly stiffened the fingers and it was quite difficult. 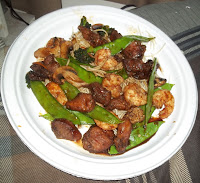 Everything worked out great.  Due to the high wind, it was necessary to cook the food inside the van; the butane stove had threatened to blow out from the gusty breezes.  Once inside, I had no troubles with the burner although it seemed to lose efficiency and didn’t put out quite as much heat after a while.  Normally, the little Chinese-made butane stove does put out a strong heat and it’s ideal for stir frying.

The teriyaki pork and shrimp in the picture was only about 450 calories. That included a generous amount of meat and veggies (I’d already eaten half the veggies before taking the picture), as well as a half serving of Chinese noodles.

The taste was friggin’ incredible. The trick was using the marinade and letting the “juice” reduce down while cooking. You get tons of flavor without having to drown the food in a lot of oil.  We won’t talk about sodium but I think there was enough that one could have melted the ice on a three mile stretch of Interstate 80 with a healthy tinkle. 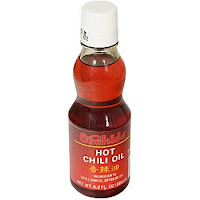 Speaking of oil, I added  just a dab (maybe 1/2T) of chili oil… It comes in a cute little container about the size of a cough syrup bottle and fits great in the van’s spice rack.  Used in moderation, it adds just a little heat to the dish.  You can get the tiny bottles in an oriental market.

In the morning, I made a plate of multi-colored peppers along with onions, eggs, and low fat ham non-cured ham.  Once again, the food had beautiful colors and the calories were within reason.  Besides being tasty, every forkful helped with the wellness program, too.

These meals made the trip more enjoyable and helped catapult the mood out of the winter doldrums.  As a reader pointed out, it seems like this blog always talks about food.  It had been a be a vice.  Now food is a healthy canvas.  Cooking has always been a hobby but now it’s a new way to be good to the body.  That’s a fun thing!

Remember the post about the 20 ounce pork tenderloin last fall?  Next time I pass through the town of St. Olaf the choice will be a grilled tenderloin with lots of brown mustard and veggies.  Half the sandwich will go into the cooler.  Fun and tasty doesn’t have to result in a heart attack.  *smile*

After the hearty breakfast, I made a trip to the Menards home improvement store to exchange one of the LED task lights that had burned out.  The newer one is not quite as bright but through the clear bezel you can see where a resistor was added in line with each LED so they little lights do not get pushed to run quite so bright (and hot).  The new design should last longer.  If you saw the task lights in an earlier post (Christmas time), I like them a lot and these new ones are more of a natural light.

The rest of the morning was spent poking around in various thrift shops trying to find things that I never knew were needed.  A lucky find was at the Mennonite thrift shop.  I discovered several colors of yarn that were exactly what I was planning to buy.  I’m making some “Nemo-like” potholders that look like tropical fish.  When one is finished, I will post a picture.  They’re going to be used in the van but have also piqued my interest.  I’m tempted to make some crafts to sell on a separate blog or possibly on this one.
That’s about it for now.  Fun is out there… Just set some time aside and wait for something fun or interesting to happen.  As a favorite customer used to say when she would visit me…  “Make it a good one!”

4 Responses to Who Are You Calling a Shrimp????