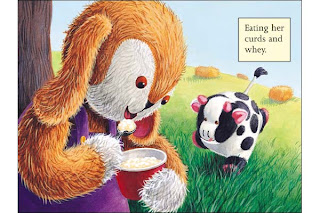 Today turned out to be a fun day.   Since it was refill time, I had to go to the pharmacy which means a bit of a drive to Iowa City.  A camping trip sounded like fun.  As it turned out, I heard some upsetting  but not unexpected news from the doctor.  Getting away from the world seemed like the best medicine.  More about that later.

So why the Miss Muffet reference?  Last night I was hanging out at McDonald’s and overheard a little girl recite the nursery rhyme about Little Miss Muffet…  As soon as she got to “eating her curds and whey”, something clicked… CHEESE!  The next day’s trip would take me within ten miles of a cheese factory.  What a fun idea. 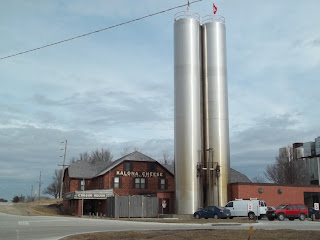 One of the favorite places to go has been the Kalona Cheese Factory just south of Iowa City in the little town of Kalona.  This place is like heaven on earth if you like cheese.  The Kalona factory manufactures cheddar for Kraft and uses two million gallons of milk per day, according to their website.  It’s great stuff.

Some of the cheesemaking byproducts are curds and whey.  Cheese curds are one of the regional delicacies – primarily found in the midwest and northeastern parts of the US.   Curds are cheesy tasting, rubbery little nuggets of soured milk solids.   If they are fresh, the lumpy little curds make a squeaking sound when you chomp down on them.  Due to the short life of the cheese curds, they are usually sold near cheese factories.   You will find them almost everywhere in Wisconsin and many places in Iowa. 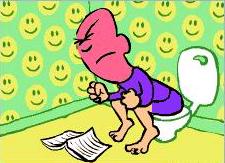 Though it’s fairly high in fat, cheese contains a lot of undocumented, stored pleasure that converts immediately to happiness when consumed in reasonable quantities.  It’s the ultimate comfort food.  I eat cheese just about every day and often substitute it for meat.
This cartoon is not a self-portrait but it could be… Too much cheese maybe isn’t a good thing.  This poor dude needs some blood pressure pills or at least a good laxative. 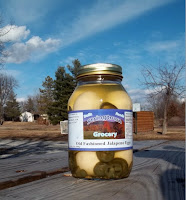 The next destination was a little Amish-Mennonite grocery store called Stringtown.  It has the typical assortment of many bulk dried foods and spices, homemade breads, and canned items.  I really didn’t need anything but did pick up two cool items.  For a few dollars, I bought a good sized container of dried French Onion Soup mix.  Yum!  I also bought a jar of the most delicious pickled eggs – they even had jalapenos in the jar with the eggs…  Some pickled turkey gizzards would be nice but then the temptation would have been to buy some beer!

Later in the afternoon, I went south to a different campground – Marr Park near Ainsworth, Iowa.  I needed a change and this was the place.  It is near some beautiful man-made ponds stocked with bass and catfish.  The camping rate is reasonable at $16 which includes a shower room during the warm months as well as electricity.  Once I fired up the netbook, there was a pleasant surprise – they have free Internet with a five bar signal!  In addition,  a scan revealed 17 TV channels.

After a little nap and break to watch Judge Joe Brown, I went out for a walk to take a few pictures.  As was the case today, the emotions have been all over the map after the doctor’s visit.  The fresh air and a good walk helped a lot.  I think it finally sunk in that the body is getting older.

Bad news was mentioned earlier but it will all work out.  I’ve been in agonizing pain every night after working on my feet.  Today the doc said it is a healthy case of diabetic neuropathy – a word that strikes fear into diabetics.  Untreated, it can result in amputation.  I had never been diagnosed until today but knew I had it and it was worsening.

At this point, the condition can be treated with medication, diet, and exercise.  The outlook for reversing the damage is very good.  The doc said just keep losing weight and exercising.  She was 200% supportive.  If there is an immediate silver lining, it is that I have been restricted to not more than five hours a day of working on my feet.  The van living lifestyle means I don’t have to work longer hours and continue to suffer.  More time can be spent fishing and bike riding…  Life is good.

Life is short.  Enjoy every day.

8 Responses to Eating His Curds…No Whey!