The Cure for a Poopy Mood 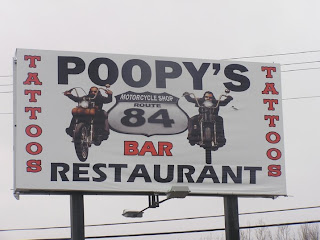 Chevy Vans are Welcome at this Biker Pub and Grill﻿

Have you ever been in a “poopy mood” ??  I sure was a few days ago after deciding to quit working at “Big Orange”… It caused a little family friction and was a stressful situation.  Shi* happens though.

The good news is that I hit the thirty five pound weight loss mark and a celebration was in order.  The other night when I was in a crappy mood after giving my notice at the home improvement store, some how the word “poop” came to mind in addition to obvious, less acceptable synonyms.  That triggered a memory of a bar and grill in Savanna, IL (90 miles east).  I that heard Poopy’s was a cool joint.  (named after what friends call the owner)  Some reviews said that Poopy’s was great, some said it sucked… That’s reason enough to check it out.  I wanted to judge for myself.

On the way, I stopped by the family cemetery and visited the maternal side’s graves, pausing to decorate my grandparents’ marker.  Part of Mom’s ashes were sprinkled there.  A few miles north of the town of Maquoketa, along a gravel road in neighboring Hurstville, I had placed the rest of the ashes.  From the spot high on the hill several miles away you can see what was Grandma’s house in Maquoketa – Mom’s childhood home.  The Husrtvill road had a special meaning to Mom and I close to forty years ago as we looked from the upstairs window wondering where the little gravel road in the distance.  Somehow I knew this was where to put the rest of Mom’s ashes back about a year ago.  I talked to her, prayed, cried, the usual stuff you do when a loved one dies (and for a long time after). 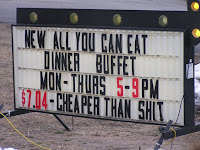 Once in Illinois, it was no trouble finding Poopy’s Pub and Grill.  You could see the billboard from nearly a mile away.  They also had this rolling sign proudly proclaiming the value of their buffet offerings.

With the inception of the weight loss program I vowed no more buffets this year.  This kind of prohibition is not wrong… Would an alcoholic (serious about reformation) keep going to the town tavern saying “I am strong and can stop at one beer” if he/she would likely get crocked?  Heck no… Well, not unless a person wanted to fall!  Will power is good but there’s no need to tempt fate!

Already a bundle of nerves after the cemetery thing, it was hard to be friendly.  The cold/flu was still hanging around and most of my hearing was blocked by congestion.  I felt like.. well… crap.  Thankfully, I had one of the lovliest waitresses who kept calling me sugar, honey, and sweetie.  She was an older lady who seemed genuinely friendly and made a big difference! 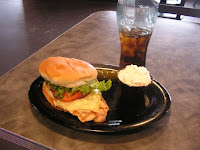 Beverly, helped me pick out this big assed grilled chicken sandwich and recommended a side salad.  As you can see from the picture, it looked and tasted great!  Though only an eight ounce breast (“chicken boob” as they call it), the meat was pounded it out till it looked looked like the size of a show insert for Shaq.  Cheese?  Yep, that’s pepper jack melted on top.  Yum!  I forgot to mention that there are a few fecal references in the menu but all in good fun.  Seriously, don’t chili cheese fries look like shi*  anyway?? 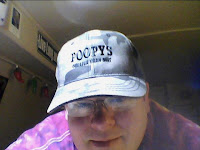 I bought this hat in the motorcycle gift shop.  They had a lot of different kinds of cool T-shirts but none of them fit.  I didn’t have a good hat to wear thus the “Poopy’s – Cheaper than shit” baseball cap.  I also bought a large metal button and took the safety pin off – it’s going to be turned into a magnet for the inside of the van door.

The tattoo artist and I discussed a tattoos.  He had about as much enthusiasm as Charlie Sheen has “people skills”.  We talked about a tattoo but he didn’t seem too thrilled to do one and it would take a return visit to get it all done…  A van tattoo does sound kind of appealing… 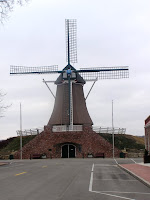 After the memorable visit to Poopy’s, it was down the road to Fulton, a small city across the river from Clinton, Iowa.  Fulton has a large Dutch community, hence the windmill.  Being part Dutch, I enjoy visiting such areas.  Mom had a great love for the Dutch people as well.

Just down the street is a meat market which has awesome meat products.  I bought a small package of Canadian bacon (VERY salty) and a single, seasoned breakfast pork chop.  Dad loves ham hocks so I threw a couple in the Koolatron for him.  They sure would be good with some campfire simmered beans this summer! 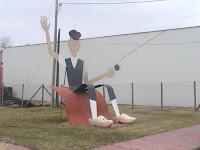 Here is a new buddy, the Dutch Fisherman.  This metal sculputure is between the meat market and the windmill.  If it looks like he is rather tall, it’s not an optical illusion.  It’s got to be those wooden shoes…  They might be big enough to make a home for the old woman (in the fairy tale) who lived in a show. 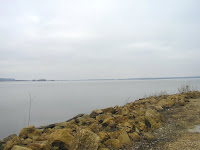 Once back on the Iowa side, I visited Bulger’s Hollow, a primitive campground just north of Clinton, Iowa.  It has a fantastic view of the pool above Lock and Dam #3 on the Mississippi River.  This is the widest part of the river this far north.  It’s about 3 and 1/2 miles across.

The campground spaces are very close to the water and offer a spectacular view.  Once the weather warms a little more and the electric heater is no longer needed, this would be a great place to camp overnight and then use the generator to top off the batteries.

I headed to the little town of Commanche, just south of Clinton.  That is where I found one of the most peaceful and beautiful campgrounds – Rock Creek Park.  At present they are building some sort of a nature/visitors center.  There are a number of electric camp sites as well as cute little cabins on stilts.  During the warmer months, you can rent the cabins for a reasonable rate though I imagine they book fast. 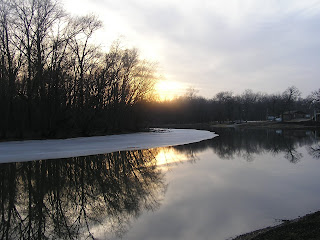 Once plugged in there was time before the sun went down to take a half hour walk and photograph the scenery.  Rock Creek was so calm that you can see how it looked like a perfect mirror.  It was so serene and beautiful.  That’s the beauty of winter camping – the solitude!

I had a dinner of egg substitute, ham, and diced “California blend veggies”.  Due to the wind, I cooked inside the van using the Chinese butane powered suitbox stove which is inconvenient but doable.   The rest of the night was spent watching TV as well as a Redbox copy of The Green Hornet.  It was a fun time.

Yesterday I had the van radio tuned to AM and a state Department of Natural Resources employee said they are looking for Camp Hosts at various state parks around Iowa.  The biggest qualifications are availability, a good driving record, and a clean criminal record.  It is likely that by the time you read this post, I will have applied.  It seems like not only a wonderful way to spend the summer but a HUGE advantage should I wish to apply for a paid job with the State or at a campground…  I’ll keep ya’ll posted.  Hopefully they will let me call a Chevy Express van my “RV”…

Thanks for reading.  I sincerely hope the readers have a “Poopy’s” kind of day.  🙂

3 Responses to The Cure for a Poopy Mood