Another WW II Hero Has Left Us 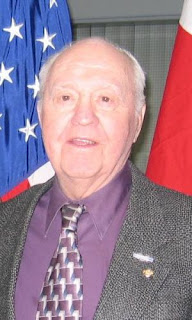 Earlier this week, we lost a member of our family.  He was Dad’s cousin, Howard.  On Wednesday, I drove Dad to the other side of the state for the funeral.  It wasn’t until the funeral that I learned what a special person Howard was.

Cousin Howard was the son of Dad’s uncle (my great uncle) Clifford.  Like my grandfather, Clifford was a colorful person.  During summer fishing trips with Uncle Clifford and Grandad, my vocabulary grew immensely by four letter words.  This often earned me a bar of soap in the mouth for cursing.  Uncle Clifford often began each sentence with … well… let’s just say “G.D.S.O.B.” …  Mom didn’t like that too much, especially when I said it.

Cousin Howard was much different from his father.  Howard’s mother was a member of the “Friends” religion (aka Quakers).  Howard was much more like his mother – soft spoken and peaceful.  Clifford and Hazel were the most unusual pairing but they stayed together until the end.  He would start each sentence as illustrated above and Hazel would say, “Now, Clifford.”  They were wonderful people.

Their son Howard was a World War II veteran.  He was very humble and though proud of his military service, he never bragged about it.  It wasn’t until the funeral that I learned of his valuable contribution.  Howard was an Army scout who served in New Guinea as well as participating in the Phillipine Campaign.  He battled all the way to Manila and was one of the first to breach the Walled City.  Most of his comrades were killed in the line of duty.  The conditions there were so difficult that upon returning to the US, Howard’s commanding officer took his own life.

The funeral was unusual.  There were no hymns, sermons, or anything pretentious.  There was one prayer so long that I started nodding off to sleep.  Many of the attendees were from the “Friends” group – modestly dressed women whose grey hair was tied into buns.  Several members of the group spoke of Howard’s character in a sort of accent that sounded almost like a Pennsylvanian Dutch/German dialect.  The messages were simple and kindly.  Two members of the family also spoke, one of them a son and then his daughter.  The granddaughter read a detailed account of Howard’s service to the country and his bravery.  It was very moving and you could hear a pin drop.

At the burial, there was a small military ritual including the folding of the flag.  There was no gunfire salute – just a bugler playing Taps.  A small luncheon was held and we went on our way.  Since the funeral, I continue to remember how simple but profound the service was.  Cousin Howard was a hero, but just one of a whole generation of heros.  He lived a very simple, humble life.  Even after his departure, he didn’t want much fanfare.  May he rest in peace.  Because of heroes like him we can rest in peace, too.

One Response to Another WW II Hero Has Left Us