No, it’s not what you think… No drugs or booze… It was just a fun trip to Iowa City, a very liberal college town.  By chance, several of the highlights of the journey seemed to share terminology with those who like to indulge in cannabis…

I apologize in advance if any of the drug references in this post offend the readers.  Just for the record, I don’t smoke that wacky tobacky stuff but know plenty of people who do.  As a “live and let live” type of person, I don’t get too uptight about people who smoke reefer.  It’s not for me though… I’d rather just have a drink or two once in a while…  Nonetheless, some of the antics of the stoner crowd can be amusing at times.

The lunch destination was The Cheba Hut, a sandwich shop (part of a franchise that originated in Arizona) where the menu items all bear a similarity to various pot smoking and drug usage terminology.  The employees are cool and laid back… I’m sure most of then like smoking the herb.

The Cheba Hut sells three sizes of sub:  “the nug” (4 inches), the “pinner” (8 inches), and the “blunt” (12 inches).  Various salads called “greens” are available.  I’ve had the “hemp brownies” (actually made with legal hemp) and they are quite good.  No, they don’t have the real stuff or the customer line would be a lot longer.  Some of the sub names include the “Majic Mushroom”, “Acapulco Gold”, “Jamaican Red”, etc.

I chose the “Jamaican Red” – a sub with spicy grilled chicken to which was added “Hemp Cream Cheese”…  It was served on Garlic “Herb” bread…  “Jamaican Red”, according to the UrbanDictionary.com website, is a strain of weed that was popular in the Vietnam era…   Do any of the baby boomer van hippies remember that stuff? 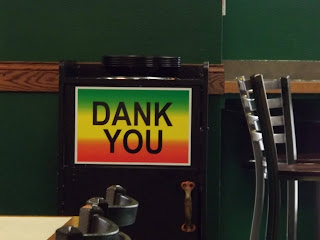 I didn’t take a picture but they had the cutest mural fashioned after a Grand Wood (an Iowa artist) painting – “The Gothic”.  The Gothic was a depiction of an old man (holding a pitchfork) and a woman standing in front of a traditional white rural house.  The Cheba Hut version was similar, however the woman is handing the man a joint…

If you like Bob Marley, you’ve come to the right place.  His picture is all over everything…  Even for a non-stoner this is a fun place to visit and the food is excellent.

After a good meal and a quick pharmacy visit, it was time to check out the Anytime Fitness.  As stated before, this membership is handy if you’re traveling.  So far each location has been clean, well maintained, and welcoming.  Between walking all over downtown for a half hour and then a good hour of weightlifting, this trip was proving to be healthy.  The upside is that this gym had HOT showers…

I made a stop at the New Pioneer Co-op in Coralville. New Pi (as locals call it) is a fresh food cooperative market that has AWESOME, healthy stuff. I picked up a couple of bread rolls, some tasty curried cashews, and a couple packs of smoked trout and smoked salmon… Okay, that’s the reason for the “smoked” verb.

The trout was delicious. At only $2.88 for a generous serving, it was a good deal.  The piece began life as a large fillet but the smoking process had evaporated much of the water. What was left was more dense and very smokey flavored. It was not as salty as jerky and did not threaten to dislodge any teeth.  Heck, you could even gum it if you had to.  The flavor was so good that I bought some additional fish to take home.  I know that Dad, as well as my cat (Jesse James) will enjoy the tasty treat. 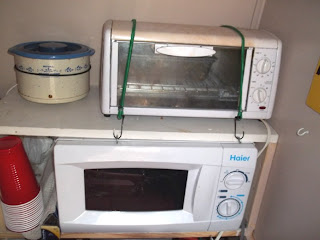 During all the fun, dinner was cooking in the van.  While scrounging through Dad’s garage, I had located a tiny little 1 quart crockpot.  It seemed like a good time to try a new recipe – a slowcooker Mexican fiesta chicken dish.  I started it cooking and did all the errands while things were simmering away.

As you can see in the photo, the crockpot is strapped to the wall with hooks and a mini bungee cord.  (I must have a kinky bungee cord fetish)  The crock put lid is plastic and does not seem to bounce around too much.  Power consumption is a mere 47 watts; with inverter inefficiency we’ll call it about 5 amps.  There is no high setting and it definitely lives up to its name as a    S…L…O…W cooker.  I might replace it with something a little bigger and faster but for now it serves its purpose:  cooking small, 2 serving meals.

The dish included two six ounce chicken breasts, a can of rotelle tomatoes,  a can of cream of chicken soup, and some taco spices.  I forgot to put in a can of southwest style corn (with peppers and black beans).  There wasn’t room anyway!  Toward the last hour, I threw in some Zatarans rice.  For sh*ts and giggles, the entree was placed in a baking dish with some cheddar cheese on top and baked in the toaster oven to melt the cheese.  The food was very tasty.  The only concern was the size of the crockpot.  It’s too darned small.  The plan is to visit the thrift stores and find a 2 quart model with a moderate amount of current draw, perhaps a Rival 70/140 watt model.  70 watts would be 8 or 9 amps.

Since the weather was warm last night, it was easy to fit in another half hour walk near the campground.  Total for the day:  one hour of walking and an hour of weightlifting…  Lots of healthy fun…

Breakfast this morning was a sausage pizza in the toaster oven.  It was baking at the same time a 1981 Cheech and Chong flick called “Nice Dreams” was on the TV… I laughed my as* off when Cheech started cooking a tortilla on the electric stove and was making a pizza with it.  What an amusing coincidence!  Believe it or not, I’d never watched a Cheech and Chong movie before.  It was funny as heck.  Though all the drug references were almost a little too much for even my liberal mind, the crude sexual innuendos kept me laughing and watching.  Wow… How did I miss these guys’ movies in the past…?  I might have to order some DVDs on Amazon.

Time to head back to town.  The new Curt trailer hitch receiver arrived and there is some work to do now…  At least the next trip can include the bicycle now!

Have a good one and thanks for reading.  Peace out…

3 Responses to Smoked, Toasted, and Crocked… The Healthy Way