The Shovelnose Sturgeon… A Klingon Fish?
Friday and today I have been down in southeast Iowa to do some fishing.  The idea was to catch a few catfish but that didn’t seem to work out.  The first thing I encountered were some hungry “sundown” sized largemouth bass… “Sundown” bass are the ones you are tempted to take when the sun goes down and it’s more difficult to see their length… (such as in a farm pond)  I released the four caught.  Though pan sized, the fines would have been too high… Maybe when those fish grow up someone else can enjoy them.  I was just there for the fight.  🙂  They sure put up a good little struggle.
The next stop was a new-to-me, primitive campground called “River Junction”…  This location has a lot of potential.  It’s a just downstream from the favorite Hills River Access location.  The problem with the Hills campground is that it’s… well… too accessible.  I pulled in on a Friday and all the big RVs and fifth wheels were there.  The river bank was lined up with people eager to fish.  That’s cool but it isn’t what I wanted – just some peace and quiet. 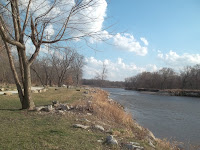 Six miles down the road was the other campground which has a few tables, a small gravel road, and no bathrooms – not even a pit toilet.  Other than a few fishermen, it was deserted.  That works from me!  Here is a shot of the Iowa River from River Junction.
It doesn’t look much different than the Hills Access area other than the river is larger and the current more swift.  I lost a lot of tackle to snags. 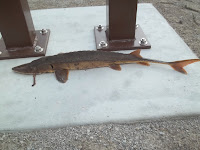 Here is the sturgeon that was caught…  This little S.O.B. almost has to be from a Klingon planet.  The scales on this fish are like body armor.  I tried to saw through it and almost busted the fillet knife!   I had to gut him from the inside out, first slicing down the belly, cleaning out the innards, and removing the meat out from the inside to the skin…  At one point the fish wrenched and tried to strip the skin off my hands!   I washed him off and he went into the cooler for today’s lunch.

Later in the day, I took a nap but started to feel sicker and sicker for some reason.  It was warm and humid yesterday – 82.  That’s a record for March in Iowa.  The van, with its white exterior, was 89 inside.  Once the roof vent was turned on, it cooled down to 87.  There is a feature that you can set to auto open when the temp reaches a certain level – that will be tested today.

It was still difficult to relax.  (It’s certain now.  In a few weeks, I’m going to buy a portable air conditioner.)  While resting, it was a good time to try out the generator for a couple hours and it put a nice charge on the batteries.  With 55 amps going into the battery bank, even just an hour’s charge would power the overnight period!  The charger tapers back as the batteries fill up.
As the evening progressed, I became concerned that something was wrong health-wise and started driving back to town.  Then it dawned on me the reason for feeling crappy.  It was just a little heat exposure and good ole’ exhaustion.   It had never occurred to me that in March there would be a sunburn and issues from playing outside all day!

I stopped at the Interstate rest area to rest (imagine that) and watch some TV.  Feeling a little better, it was a few minutes drive to Walmart for a great night’s sleep.  With the bike on the back of the van, it didn’t seem like a good night to stealth camp on the street – that would be a dead giveaway.  That’s where Walmart shines… You don’t have to be stealthy!  The “Walmart” campground is like the graveyard – they’ll take anything!

After waking up and going back to sleep, I had a nightmare that I’d been boondocking in a hospital parking lot and someone stole the Trekker Van.  In the dream I had to explain to the nurse about why a person would want to sleep in a van.  I remembered thinking I would make another one.  Oh, how good it was to wake up from that one!

One comment about boondocking at Walmart.  The first few times you hear noises and such.  With time, you learn to relax and sounds don’t bother you any more.

The plan today is to go back to one of the rivers and do some more fishing.  It might also be a good opportunity for some biking on one of the trails in Iowa City.  There is no need to hurry back to the usual parking spot at Dad’s.  Once you spend the money for gas to get where you’re going, there really isn’t much expense in extending the trip.
**** UPDATE ****  The stureon was so tasty now I’m kicking myself for throwing the 2nd one back in the river.  The meat was firm and tasty – definitely a good candidate for smoking next time.
Have a great day!  Thanks for visiting!
Brad