A New Bike Trail to Explore

Sunday (April Fools day) was one of those days when fun was needed but I wasn’t sure about taking off for a van trip.  With gas running $3.74 a gallon, exploring is becoming difficult to justify.  Rather than just going for a day, it seemed more logical to make the excursion last at least two or more days.  The initial plan was to stay at the same campground as usual but it just didn’t seem too appealing.  Something different and spontaneous was needed.

My friend Johnnie lives in Muscatine, a medium sized city along the Mississippi River in southeastern Iowa.  Johnnie is the cousin of my buddy Tony, the guy whose farm I periodically use for camping.  For some reason,  Muscatine sounded like an interesting destination.  I had promised to visit Johnnie one of these days and Sunday seemed like a good day to do it.  After he and I talked the other day,  I remembered a biking / walking trail that followed the river.  It looked similar to the one upstream in the city of Davenport.

After arriving in Muscatine, I parked the van at a parking lot downtown, a midpoint in the intended biking course.  Not knowing the length or terrain of the trail, I decided to do the north portion of the ride and, if able, hit the south end.  The temperature was about 80 degrees with a light northerly wind blowing down the river.  It made for a cool, humid breeze along with that sort of smell you only experience around bodies of water.  It was heavenly. 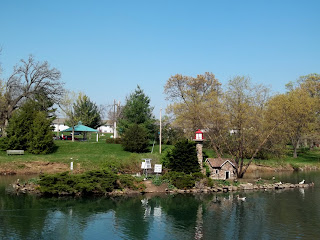 The north portion of the trail offered stunning views of the Mississippi River.  The rolling and occasionally steep hills made for a good workout.  The north leg (only a few miles long) wound through acreages and river bank areas, ending at Weed Park.  Isn’t this little fishing pond (only for kids 14 and under) kind of neat?

It is difficult to see it but there an island in the middle with a little cabin and lighthouse.  There are lots of ducks around the vicinity.

I rode back to the van and started down the southern portion of the path.  It was built on a levee and also gave a spectacular view of the mighty Mississippi.  The scenery to the south was more industrial and entered an older, more working class part of town.

This photo is from the southern extension looking back north toward the city.  It is such a quiet, calming view.

After reaching the end point, I exited the trail and rode back through town on city streets and sidewalk.  By this time the blood sugar had dropped too low and I could feel it… It’s not unlike the “oh crap” feeling you get when the car runs out of gas.  That’s when I noticed one of the favorites…  Taco John’s – the perfect place to refuel.

Our local Taco John’s has contributed a lot to the success of the weight loss program.  The love affair with that place is almost like Jared and Subway.  I usually get two chicken softshell tacos (total 380 calories) and add large amounts of the free condiment pico de gallo (adding about 70 or so calories).  This gives a huge nutrition boost and not a lot of fat!

Check out the before and after chicken taco pictures. Doesn’t the second one look a lot more appetizing and healthy? (We won’t talk about the salt in the salsa and extra toppings though).

The green sauce is called either “Super Hot” or “Green Sauce”.  It is simply ground, pickled jalapeno peppers (juice and all).  Blending it breaks up the seeds and unlocks that digestion enhancing chemicals as well as the lovely flavor.  “Green sauce” is almost a cult type of thing.  I’ve eaten it for over twenty years.  If you have a weak stomach, it might not be a good idea to partake just before a bike ride or run…  If you’ve ever seen the flames out of the back of a jet engine…   😉

After the ride and taco the clothes were understandably soggy.  The next stop was Anytime Fitness for a quick shower.  It didn’t work out that way.  The next hour was spent lifting weights with the already warmed up muscles.  It felt great and I hit eleven machines, three sets of reps on each.  Hunger set in again and in a huge way this time.

Johnnie and I visited a Mexican restaurant called Las Lomas.  I didn’t find out until later that it received good reviews.  I plan to help their score even more.  It was super!

As a reward for weight loss and a day of fitness, I had shrimp fajitas.  The daily calories were a little higher than the break even point, but with all the exercise I still ran a caloric deficit.  The whole day was a fun experience and a great motivator.

Last night I ended up wandering back toward Iowa City checking out some public hunting / boondocking spots along the way.  The weather turned a little colder, contrary to the forecast.  This necessitated some man-made heat.  The Mr. Buddy was put away for the year so I had to camp at, of all places, the old stomping grounds and crank up the space heater.  When I got there, it felt like home!  There were only a few campers and it was very peaceful.

Today (Monday) the food intake is back to a normal pace.  That’s a great feeling because it means that this is not just a diet but a lifestyle now.  Temporary excursions from the plan don’t have to mean backsliding and failure.

Monday was spent biking around Iowa City and taking some pictures.  I’ll post more about that tomorrow.  The sun is going down and I need to go set up the generator and pump some juice in the batteries.  Since the weather has warmed up a little, I’m going to boondock at a favorite spot near the river.

Take care and thanks for visiting!

2 Responses to A New Bike Trail to Explore