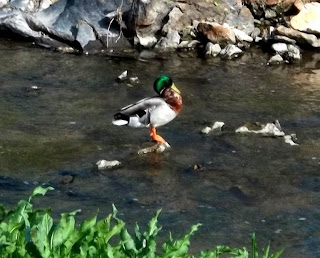 Taking a bath where you can… Nothing like running water!

Monday was another productive day in terms of exercise and fun.  I woke up early and made a little “omelete in a bag” (actually stored in a plastic container.)  The “Antenna TV” network was playing Joan Crawford movies.  I watched the 1956 movie, “Autumn Leaves”.  It’s become kind of a tradition, when camping, to catch a good movie in the morning on that channel.

I headed to Iowa City and was in a quandry as to what exactly to do with the day.  There is a parking ramp under Washington Street that is used for Farmer’s Market.  It has high clearances (great for a van!) so I paid for a spot for five hours.  It is underground on one side and was almost chilly.  That made a difference in the Koolatron – the temperature in the cooler stayed around 35 all day even though the outside air was 80 or so.  It was so comfortable in that ramp that I took a morning cat nap.   🙂

The bike ride lasted for about three and a half hours and took me to both ends of Iowa City.  For a while I rode around the downtown area which is very hilly.  There is one hill that is so steep that it’s more fun to ride into the parking ramp, take the elevator up to the fifth floor, and ride out at street level.

The school campus was full of healthy, energetic people.  One young lady, rather scantily clad, was sleeping inside a large circle shaped piece of rusty metal on an outdoor sculpture.  I so wanted to take a picture of this “hippy chick” but was afraid of getting questioned… It would have looked cool on the blog.

While riding, I remembered something we did when I was younger.  Back then we called it “ramping”… It was the rage.  You go to a parking ramp, ride (or take the elevator) to the top floor, and go zipping down the ramp on your bike.  It seemed like fun… Note to self… Don’t try it in a busy hospital parking ramp.  The drivers are crazy.  It’s good for a quickie thrill though!

By this time the stomach was growling and I was stuck in a rut.  I stopped at Taco John’s in Coralville and talked to the owner, Mitch.  He’s one of the nicest people you will ever meet.  Mitch’s store was flooded in 1993 and 2008 but it’s again been rebuilt, better than ever.  You would be hard pressed to find a guy with more loyal customers.  After the last rebuild, the place was swamped for many days with people who had missed the food and friendship.

The next direction took me along a path back toward the university.  The asphalt trail stretches through a wooded area.  I noticed several markers pointing to various types of prarie grasses.  It was interesting to read about them but since the time is so early in the year, pictures just didn’t do justice.  The next trip might yield better results when the plants start to bloom. 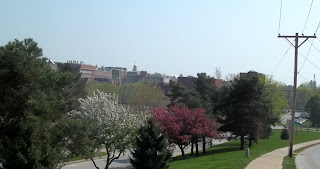 While heading back toward town, I took this next picture of the Iowa City skyline.  Note the old capitol in the background.  Until 1857, Iowa City was the capitol of Iowa.  The government was moved to Des Moines for a more central location.

Those who have been to Iowa City will likely remember this familiar landmark, the Benton Street pedestrian bridge. I remember as a kid wanting to walk up and down the spiral. Many years later I did if for the first time and it’s always been a fun part of each bike ride. 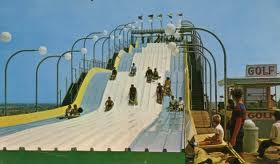 Back then in the 1970s this area had an open air theatre (aka drive-in) as well as a multi-story, giant slide.  Do you remember those huge slides like you see in the picture?  As a kid, I recall that we talked Mom into climbing up there. She sat on the burlap sack provided but wet herself when descending.  Now the drive-in and slide are gone… Strip malls replaced them.  Can you imagine how popular the slide would be today?

The time was passing quickly so I returned to the parking ramp.  The van was moved to the south end of town near Terry Trueblood Park.  This park is connected to the same trail system (Iowa River Corridor Trail) as the pathway that leads from North Liberty.  The park has a large lake that was once a sand and gravel quarry.  It was a “new to me” area and well worth the ride. 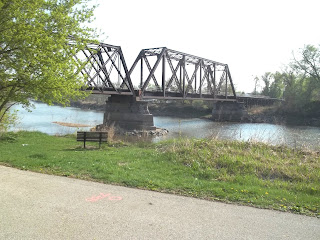 This beautiful old bridge is north of the park on the way back toward downtown.  The trail actually passes under the structure.

Sadly, there is no camping anywhere in this area.  A person has to stealth camp or go out to the country. I have heard that they are thinking about developing a campground.  That would be nice if they could do it affordably.  For now, the little campground in Hills, Iowa is just a half dozen miles away.

On the upside, the Iowa City area is a great place to sleep if you can do it in a stealthy fashion.  I decided just to boondock in the country.  Carrying a bike on the back of the van isn’t too stealthy.

The AGM batteries were in need of a top off so I went to an area northwest of town and camped in a public hunting area.  There are many of them near the Iowa River.

I ran the generator for an hour and a half.  That’s usually when the Iota charger drops from bulk phase (55A) down to the absorption rate (to prevent overcharging).  With the Honda generator set to the Ecoboost mode, I can hear the reduction of engine speed.  That is an easy way to know when things are in good enough shape.  You don’t have to run the batteries back up to 100% every time.  To do so with the generator (as the rate slows to a trickle) would be a waste.

Well, that’s about it for now.  It was a fun little trip and not too costly.  This lifestyle is proving to be happy, relaxing, and healthy.  At some point, it would be good to bring some employment back into the picture, but everything in moderation, of course.

Have a good one!  Thanks for visiting.  Go for a bike ride today!

One Response to Some Iowa City Pictures