Added Solar Capabilty to the Van 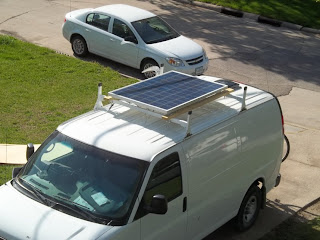 A 235 watt solar panel to make boondocking easier. This photo was taken from Dad’s house roof.

For those wishing to boondock for either a day or a season, nothing beats an on-board solar panel system for coddling your house batteries.

Though I have a generator, it does use gas and necessitates me being in close proximity to the van. People love to steal generators – especially Hondas. The generator is great for high current applications such as a toaster oven or microwave but it’s kind of a waste to use it for trickle charging batteries.

The other problem with the generator is there is no “real time” charging. Even a car alternator can only charge when burning fuel. Instead of having to wait to charge the batteries, now they can receive some kind of charge all the time, if needed. Solar will also save running the AGM batteries down when forgetting to plug in shore power or leaving the Koolatron on


Once very expensive, solar prices have been coming down to some degree. If you can do it yourself, you can save a great deal of money. After having watched the costs drop, I jumped on a deal on the Astronergy 235 watt (30-34V), polycrystalline panel.﻿ Only one panel was desired though at the time I didn’t realize how difficult it was to wrestle something this big! (Roughly 39″ x 54″)
At the same time, I ordered a Chinese made (despite better judgement), no-name MPPT solar charge controller. For those unfamiliar with solar, a charge controller simply takes the incoming solar panel energy (which can vary quite a bit all the time), and while monitoring the battery charge state, regulates the charging current going into the house battery bank. Without this controller you can overcharge and destroy the batteries.
So here is how it all was fit together. On the roof rack, I added two green treated 2×4 boards running lengthwise. They are clamped to the rack with u-bolts. I could not paint or stain the boards yet because the treated lumber is repelling water and other liquids. 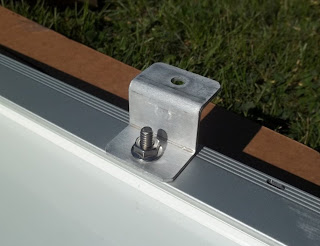 The next step was to install the Z-brackets to the bottom of the solar panel. They keep the panel secure but elevated a little. It is better not to flush mount – air circulation is desirable. When hot, solar panels lose efficiency.
The dealer sold me one set of four Z-brackets like you see in the photo. I purchased an additional set. That turned out to be a wise decision. Holes were pre-drilled in the aluminum frame to accommodate three brackets on each side for a total of six. Had I bought only the set of four, I would have been very upset! I was able to use six and still have a couple extras.

In this picture, the panel is face down on some cardboard on the ground. The white surface is the back side. I was told by the vendor to be very careful not to damage the back because it is more sensitive to scratches than the front. I babied it!

Once the panel was ready to mount, I rechecked the spacing on the 2x4s on the roof. Their separation was adjusted a little. Outside edge to outside edge was 43″. That gave me some room to center the feet against the 2x4s.
Then I wrestled the panel up onto the roof and set it in place. Attaching it was easy. I simply drilled 6 holes, one through the 2×4 in the place where each Z-bracket sat. (Note – the Z brackets are pre-drilled making it very easy to drill into the wood). Then I fastened the feet through the 2x4s using 1/4-20 bolts, washers, and lockwashers. Originally I used standard nuts. I’ve decided to replace them with nylon locking nuts. After all, this contraption needs to go sixty miles per hour. Coming loose must not be an option.
It was incredibly easy to do the wiring. A coil of 30′ of solar wire (stranded copper with two kinds of insulation) with two MC4 connectors was purchased. You just cut it in half and use it for both leads coming in. There was enough leftover to wire the charge controller to the battery, too!
I purchased a 7/8″ hole saw for the drill and cut a hole in the roof. I used a heavy plastic snap bushing in the hole and routed the + and – cables through the roof and into the area behind the passenger’s seat.  I caulked the crap out of it.   One thing about passing the cables through a hole… I may change that snap bushing to something metal for durability.
With two wood screws, I then mounted the charge controller on the wall behind the passenger’s seat. It was more convenient to have it up front near one of the AGM batteries. Besides, with a panel voltmeter in the sleeping area, I can always monitor the charge level without needing to see all the details.
Inside, there were four wires I had to deal with, + and – for the solar panel as well as + and – for the battery. #10 solar grade wire was used and the four connections were made.  I couldn’t find my roll of red tape so while at the Home Depot, I snatched a couple of red paint sampe cards from the paint department.  Then I put a little piece around each of the two positive wires to color code them.  It grates on my nerves to have two black + wires and two black – wires….  It’s just wrong!
After connecting up the panel, the charge controller immediately came to life and indicated that there was solar energy and that the bank was in “charge mode”.  (Left side – blue and green LEDs) 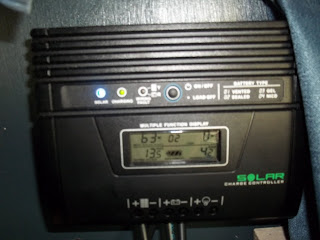 If you look at the front of the charge controller photo, you can see a number of pieces of information.

63 watts are going in at this instant. This is what is being allowed to pass through to the batteries, not what the outside panel is creating. (sort of like counting gallons per hour coming into your home at any one time, not how many gallons are in the water tower or the water pressure of it)

The 13.5 V on the lower left is the charging voltage at this time (absorption rate) that is being applied to the batteries. You can see that 4.2 amps of charging current is replenishing the batteries. When full, the current will drop to zero even if there is a bright sun. The charge controller is doing its job as a sort of “traffic cop.” It either restricts flow or says “Halt!” as needed.  When the sun goes down, it will prevent reverse current from going back into the panels.

When I first fired up the charge controller, I thought it was busted! The batteries were at 100% charge and the controller didn’t allow for any charging. I ran a bunch of current hogging devices for an hour. Like a dumb ass, I locked myself out of the van and had to look for a spare keys! (I had taken off the magnetic keyholder some time back)

By the time I found a key, with all the loads running, the controller had changed to a bulk charge phase. According to the panel, the two AGM batteries were now getting fed 11.5 amps of current from my 8 amp rated panel.

How can that be? A 235 watt panel that is rated for 30V generates about 8 amps of current max. Watts’ law says that power = current x voltage. (235 watts = 30 Volts x 8 amps).
Here is where MPPT shines. The old style charge controllers only clip off the voltage above 14 or so volts. That means that 14 volts times 8 amps means you can only get about 112 watts of power maximum from that 235 watt panel! Much is thrown away. What a waste!

MPPT is more efficient at converting energy from higher voltage panels. MPPT technology does not waste the excess. It would be a different story for a smaller panel. If your panel only kicks out 17 volts it’s not really worth the extra bucks for an MPPT controller because there’s little extra to harness. If charging a 13 volt battery with a 34 volt panel, I would be throwing away the extra 21 volts using the older technology!
As you can see, I’m freaking delighted at the extra 43.5 percent current being utilized from the panels thanks to the charge controller. That’s actually higher than the average savings for an MPPT system and probably not something that will be seen all the time. Nonetheless, it made me glad that plenty of time had been taken to research the different types of charge controllers and buy one that was a perfect fit for the need. It’s going to be fun to use on the road, too. 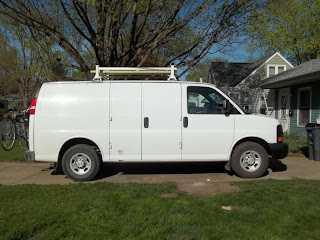 Here is another shot of the Trekker Van. You can see something on the roof but it’s hard to tell it’s a solar panel. The bottom surface is white. The plan is to add some small trim on the sides that shields the panel from people on the ground but does not at all shade it from the sun.
Well, I hope this post was of interest for those who are considering solar technology. It’s not that expensive, works great, and is easy to install. The whole project took just a couple of hours to do once I got going.
Please feel free to email or comment with questions about solar or any other topics.  There are also plenty of knowledgeable folks on the Cheap RV living forum as well. They helped me and I’m happy to pass the favor along to others. We learn from each other and by doing.
Have fun and thanks for stopping by!

11 Responses to Added Solar Capabilty to the Van