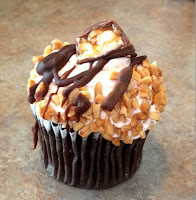 Call me what you want, but just don’t call me “cupcake”…

It seems like there is always some kind of a theme or highlight to each trip.  This time it was cupcakes.  More about that in a few paragraphs.

This weekend seemed as good as any to take a little two day camping trip…. Waterloo, Iowa was a place I wanted to check out.  Some buddies at the University of Northern Iowa invited me to come and visit.  Why not?  There’s nothing like a motel room on four wheels!  A person would be hard pressed to find some other way to enjoy a weekend for just the price of gas.  It was also a good opportunity to recheck the solar installation and see how it would hold up to highway driving. 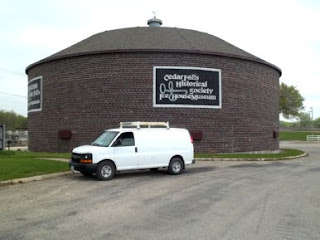 After reaching the neighboring town of Cedar Falls, Iowa, I visited the ice house museum.  It’s not open until May but there is a wonderful park in this area.  Many like to fish here, particularly in the water below the dam.

The ice storage facility dates back to the late 1800s.  This building was consructed after a fire in 1921.  It’s 100 feet in diameter and has walls 30 feet high.  I read that the walls are filled with clay.  The storage capacity was 8000 cubic feet.

The ice came from the nearby Cedar River in the pool above the dam.  Sadly, the ice house went out of business as technology evolved.  No more ice boxes!  Even to this day though, there are Amish folk nearby who still cut ice in the winter to use for cooling their food.  And we thought we were “boondockers” ??    🙂 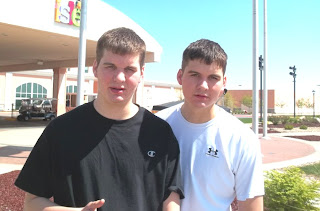 From there I met up with my buddies, Tyler and Kevin (left to right).  Tyler and I used to work together at the gas station in Iowa City and we have remained friends.  I was the supervisor and he seemed like an intelligent, serious minded young man so he was hired.

Well, the intelligent part was right but I don’t know about the serious minded part.  He was a great employee though.

Those guys are die hard party animals but yet are very respectful of older people at the same time.  I wasn’t any better at that age…  (or now?)

It is interesting watching them interact.  The twins have the most peculiar pattern of communication between each other – rapid fire, incomplete sentences that each seems to comprehend before the other is finished speaking.  It’s amazing – darn near telepathic.  If you ever saw the Star Trek Next Generation epsidode called “11001001” you would understand.

When it came time to meet up with the twins, I drove around the area called “The Hill” in Cedar Falls.  The hill has many apartments and, of course, bars for the college kids.  Talk about incognito.  Besides the van being stealth, being an old fart (over 40), the driver is stealth, too.  The girls don’t even give a second glance.  Talk about feeling like a fish out of water!

Tyler was talking to me on the phone and spotted the solar panel from the third floor balcony apartment.  He thought it was “[expletive deleted] awesome!”  (the “f word” preceeds nearly every positive  or negative exclamation.)  Though not seen from the street, a cargo van with solar on the top is easy to spot from above.

Keven, Tyler, and I went to the casino in Waterloo.  After a nip and tuck battle with the slots at least I was about a dollar ahead – time to run like hell.  After a couple quick bets on the routlette wheel I was up $10 – enough for a free dinner!

On the way out of the Isle of Capri Casino, Tyler, Kevin, and I paused to watch a cupcake eating contest.  Still being a big guy, it made me an easy target.  One of the employees asked if I’d be interesting in entering a drawing for a chance to compete.  I politely declined telling her I’m diabetic.  She looked apologized so I laughed and said if I was up there I’d eat all the cupcakes before the challenge started.

There was a cool mix of people participating:  a tiny Asian girl, a few chunky, white rednecks, a scraggly, tatooed, biker chick type with no visible upper teeth, and a huge, charismatic black dude that made me look skinny.  The guy who won ate 42 cupcakes – he was a normal sized white guy.  At about 250 calories per cupcake that would be over 10,000 calories in eight minutes…  Holy killer carbs, Batman!  That’s practically enough to kill a normal person.  Besides, cupcakes are for wimps.  Real men eat Fiber One bars.  I’ll bet if that dude ate 42 of those, he’d feel it the next morning! 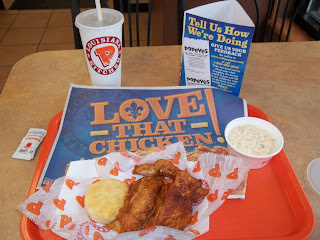 After the casino the twins took off to prepare for a wild night of partying.  I bowed out.  The young ones can pick up the slack.  If the cops break up a party, there’s an unwritten law that says the old guy gets arrested first.

Having missed lunch, it seemed doable to visit an old favorite – Popeye’s Chicken.  That was a risky decision because of dietary concerns.  Not to worry – the have a skinless option called “naked” strips.  These thin, highly seasoned pieces of breast meat were delightful, particulary when drenched with Louisiana hot sauce.  I could “afford” the calories eaten and it was a real treat.  I sneaked in a little cole slaw (mistake!)  Between the cole slaw and biscuit, they totalled a whopping 500 calories and over 30 grams of fat!  It was worth it – it’s better than 10,000 calories of cupcakes.

This was cool.  I did the phone survey about the Popeye restaurant experience and received a code to redeem for a free 2 piece chicken and biscuit meal.  Not bad!  Those calories can be squeezed in on Sunday.

By this time the sky had darkened considerably so I parked down the street and camped at the local Walmart.  Directly across the road is the Anytime Fitness.  Wow!  I slept in, had an awesome workout at Anytime Fitness then hit Popeye’s for the free lunch.  By eliminating the biscuit and subbing an ear (full-size) of corn with not butter, it was filling.

On the way out of town, it seemed like a good idea to plan the rest of today and tomorrow.  The bakery had the most delicious looking mini cupcakes.  It was easy to work in the extra calories.  The picture doesn’t do justice to this awesome little confection.  Thank goodness it was small!  Please don’t call me “cupcake” though or you’ll see this man beg, bark, and dance like a dang poodle.

Thanks for visiting.  Have fun and do something a little fun and crazy today.

2 Responses to Don’t call me cupcake