Exploring Some More of Northeast Iowa

By VanTrekker | April 17, 2012 - 9:20 AM |April 17, 2012 Uncategorized
0
SHARES
ShareTweet
Today’s journey took me through the small town of West Union, Iowa.  It is… well… a ways from just about anything.  I guess you could most easily describe it as about halfway between Waterloo, Iowa and the NE corner of Iowa… For some reason, I wanted to take a picture of this old water tower.  I couldn’t find a date for it on the Internet but many of these type water towers date back to around 1910 – 1920 or so.  They are just plain cool.  Today’s models just don’t have that same charm.

Last night’s resting spot was at the Volga River State Park near the towns of Fayette and West Union.  Fayette is also an immaculately clean little town which is the home of Upper Iowa University.  It has a trail that looks ripe for exploring with the bicycle during a period of better weather.

The Volga River eastern campground is high atop a hilly area and offers a beautiful view of Frog Hollow Lake which connects with Frog Hollow creek.  The area has limestone bluffs and many pine as well as elm trees.

This section of NE Iowa is often called “Little Switzerland” because of that rolling terrain.  There are many Germans, Swiss, Norwegians, etc. who settled in this area.  You’ll even find a number of Norwegian type items in the local grocery stores. (pickled herring, potato breads, etc.)

I rolled into the campground around 4:00 or so and was surprised that I could get a spot with electricity for $11.00.  The idea was to boondock but I was tired and didn’t want to run the generator.  The day had been cloudy and surely the batteries were not up to par.  Wrong.  Even with a lot of cloud cover, they were fully charged within a very short time using shore power.  Solar had kept them in great shape.  Nonetheless, it was very cold last night so it was nice to be able to run the space heater. 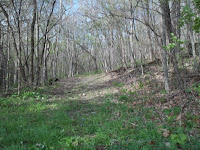 I went walking for over an hour along a hilly trail between the campground and the lake.  Hours of walking on flat ground and treadmills cannot prepare you for hilly, rocky topography.  I was freaking exhausted and the legs were burning by the end of the hike.  It was a lot of fun though. 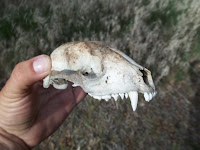 While hiking, I discovered this skull that was placed on top of an old, dried weed that protruded from the ground.  I’m not sure what type of skull it was or what it was placed where it was.  For some reason it was compelling to touch it.

Then I was kind of freaked out.  It made me wonder why someone placed it on top of the stick.  Was it for fun?  Was it a part of a Satanic ritual?  Was it cursed? 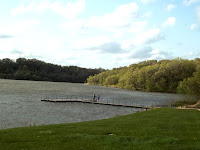 This picture of the lake was taken last night when the warm front had come through and the temp was in the mid seventies.  It was a beautiful day.  This picture doesn’t do justice to the beauty of the park.  On a subsequent visit, more pictures will be taken and trails explored.  For now, this will have to suffice.

I took off in the morning after a peaceful night of camping.  Instead of heading south toward home, I ventured a little north to West Union and checked out the Anytime Fitness location in town.  Seriously, in a small town, could one expect a nice gym?  It sure turned out to be!  This location was big, well equipped and comfortable.  A half hour on the elliptical became a full hour after I saw that the show “Matlock” was playing on cable TV…  Good stuff! 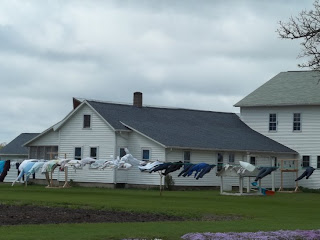 As I headed by toward Cedar Rapids, a number of stops were made.  The cold front had come through and the winds were howling at a steady thirty miles per hour, sometimes gusting higher.  Thankfully, the solar panel stayed secured tightly and charged the batteries all day.

You can tell the wind was howling just by looking at this Amish family’s clothes on the line.

A couple of stops were made along the way at the Amish stores.  I bought a few bulk items for the van including a half pound of dehydrated onions for only $1.50.  They have some true bargains.  The baked good are the best, but often they’re made with lard.  Talk about delicious but deadly!  Dad sure liked the date pinwheel cookies I bought for him… The one I snitched was awesome! 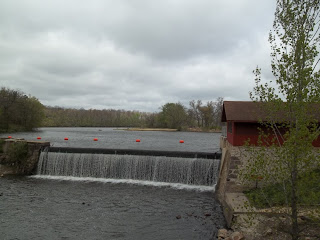 As I passed through the area, it was a good time to visit Fontana Park.  Located near the town of Hazleton this damn over Otter Creek was built in 1849 and originally powered a saw mill.  Closer to the turn of the century the facilty was changed to a grist mill.
When he was a boy, my dad used to swim across this dam.  He said he thought it had been changed.  Back then it was easier for daring kids to traverse.  They also used to dive from it.  Dad said one time he dove into shallow water and hit a rock so hard he’s lucky we wasn’t paralyzed or killed.  He and Uncle Paul didn’t dare tell Grandma that they were diving from the dam or there would have been an even worse punishment!
Below the dam is a most beautiful old bridge.  When I camp there in May, there will be more pictures of this area.  Downstream from the dam and bridge lies a primitive and modern campground with a number of sites as well as a campground host.  Primitive camping is ten dollars and fifteen if you want electricity.  It will be a relaxing, peaceful place to spend a day.  Fontana Park is also a place where I used to play as a kid when summers were spent with Grandma and Grandpa Harris.  They also have a really cool animal exhibit outdoors including deer, elk, etc.
In closing, I wanted to share this picture that I snapped at Anytime Fitness in West Union.  It sums up a lot of what’s important in life. 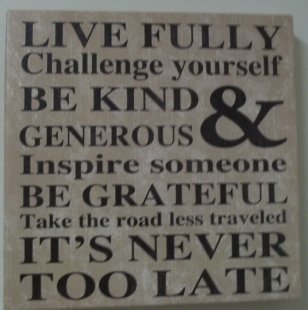 4 Responses to Exploring Some More of Northeast Iowa