Reader’s Q & A about solar 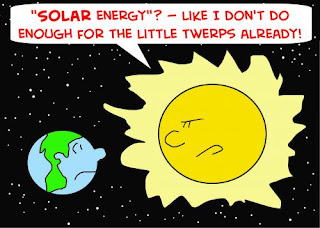 Disclaimer:  This information is provided for your consideration.  It is free advice and worth what you paid for it.  Such a deal….  Use this advice at your own risk though.  This installation is working very well for my van but that is no guarantee it will work for you.  Putting anything on your roof can increase the risk for accident or injury before, during, or after installation.

Also, do not remove the tag on your mattress or eat the silica gel packet in your beef jerky.  Please remember that McDonald’s coffee is served very hot.  FYI… No animals were harmed in the making of this blog posting.  That should cover it all.

Greetings!  The solar information recently posted seems to have stirred up a lot of interest.  A similar discussion on the Cheap RV living forum resulted in a productive discussion with Jay – a person also interested in adding solar capability.  His questions and the responses are something that might help others.  After all, few questions are unique.  I had many of the same concerns, too!

If you have any other concerns about solar or anything else related to converting your van, please email me at brad52317@aol.com and I’ll get back to you as soon as possible.

Q:  How much power in amps you get out of it in a day?

The battery bank is rated 460 amperes / hour (at a 20 A/H discharge).  That’s a healthy size for a van.  As a result, the house reserve never gets discharged too much.  I rarely go below 75% and more like 80% of capacity.

The charge controller senses that the batteries are getting full and throttles back long before the solar energy wanes. I don’t know how many amps I get out of it per day because I’ve never needed that many.   Conservatively, I would say max could easily be as high as 85 + amp hours on a sunny day.  The approx 30V panel and MPPT charger help pump a lot of current.  The more drained that the batteries are from nighttime use the more current you will be able to utilize in a day.

Q:  What charge controller are you using?
A:  The charge controller purchased is a generic, Chinese made model that you see on EBay. It was literally shipped from Taiwan. There is no name on it but you can find it at mppsolar.com    The cost was about $170. It is MPPT which, with a higher voltage panel, is necessary or you’ll discard much of the power you produce.  With a standard PWM charger, I would be lucky to get 8 amps at most and probably not even that.  Currents of 10-12 or even 13 amps are common most of the day.
Q:  Does the solar make power from over head street light like in walmarts while you sleep at night?
A:  No, there’s not enough light even though it seems like it at times.  Believe it or not, you can actually get used to those lights enough to sleep.  I now seek them out for a little added security.
Q:  How do you have your power setup rigged? Like does the charge controller have to be disconnected while charging from the alt?
A:  I have the house batteries completely separate from the starting battery and alternator. Normally they use a charger that connects to external electricity (shore power or generator).   If for some reason I need to use the on-board battery charger, the solar panel’s charge controller simply cuts itself off, because the charger is putting out a sufficiently high voltage that the charge controller says “nope, I don’t need to put anything out ’cause I think the batteries are full” and throttles its solar output back to zero.  It didn’t take any kind of special rigging.
Why did I choose not to use the alternator?  It’s kind of hard to reach for one thing.  If it were to get hot and crap out from the load of another couple of very large batteries, the alternator is buried so deep in the engine compartment, it would be a pain to replace.  Wouldn’t that be fun to deal with while driving down the highway in the middle of Nebraska?

I had a U-haul break down one time when a weak battery caused the alternator to overhead and burn up.  The thing broke down right in the “hood” in Gary, Indiana.  Not a place you want to be stranded!  It was an easy fix for the mechanic but I was scared shi*less waiting for someone to arrive!  I’ll pass on taxing the alternator.

Another reason for not needed the alternator type of charging arrangement is that for the type of camping I do and the short trips, there is almost always shore power available.  If not, I carry a generator.

Q:  Does the charge control have to be disconnected while charging for the alt? Or do you have the 12v from the alt running into the charger controller and into the house battery?

A:  No, you should be able to leave the charge controller hooked up if you like. There should be enough regulation coming from the alternator to safely charge the battery bank.  If you shut the engine off the alternator stops and presto…  the solar will take over, if needed.  You could always put a disconnect relay or even a switch inline if you wanted to run off the solar and ignore the alternator such as when on a long trip through the sunny desert.  A heavy load on the alternator does cause wear and tear as well as uses a little more fuel.  Solar is basically a freebie once you get past the sticker shock.
If charging from the alternator, do make sure and use an isolator.  The isolator will prevent current from leaving the solar panel setup or house batteries and flowing back to the starting battery.  It’s kind of an electrical “one-way street”…
Q:  How did you make sure the panel does not come undone while driving?
A:  The panel came mounted to a very strong aluminum frame and was recommended for RV use. The vendor sold it with four Z brackets though the panel was pre-drilled for six brackets.  I installed two extra brackets (making six) and am contemplating adding the last two “feet” in the front center and rear center aluminum frames.

So far the setup is good to 70 miles an hour.  I recently drove for a number of hours during a “high wind warning” and found out it could easily handle highway speed with a 35+ mile per hour, gusty crosswind.  Semis, U-hauls, bread trucks, and this van were all swerving a little but the solar panel stayed in place.

About the U-bolts…  The 2×4’s are mounted to the roof rack with 6 long U-bolts (1 on each 2×4 at the rear and 2 on each 2×4 toward the front on the van)…  I felt that one of the biggest strains would be a lifting force and more intense vibration on the front and that’s why I used more hardware up there. Each U-bolt has locking washers and locking nuts, too.
Q:  How heavy and hard was it to install the panel on the roof rack?
A:  It was not difficult at all. I did it with one person and a rickety aluminum stepladder.  I had the 2x4s installed and ready to go long before setting the solar panel even arrived from the shipper.  Doing the preparation and planning it out made it much easier.
The Z bracket feet were attached to the panel while on the ground and the side-to-side distance between the feet (roughly the width of the panel) was measured. Then I spaced the 2x4s precisely where they were needed, making sure to measure a couple of times.  Of course, they didn’t land where intended so I had to loosen the U-bolts and adjust the spacing a little despite the careful methodology.
It was just a matter of lifting the panel into place and setting it down on top of the boards. Just for safety’s sake, I lashed the panel down with an old extension cord while drilling holes into the 2x4s for the bolts that go through the feet. The panel was heavy enough that I didn’t need to do be tied down but it was reassuring. Those March/ April winds are unpredictable!
I would not try to lift the panel if there is more than a 10 mile per hour wind.  It was a struggle for me and I’m a strapping 300 pound Iowa guy.   Even then the old back and shoulders were sore for a couple days!  For one person the panel is heavy (60-70 lbs or so) and awkward.  It can catch the wind very easily. If you can find a helper, it would be considerably safer.  As I recall, the box even said the panel is a “two person lift.”  You will get a bit of a workout.

Hopefully this additional information is helpful.  The best advice I can give is to think a little BIGGER than what you actually need (within reason) because flat mounted solar is a bit less efficient.  Remember, the charge controller is your friend and will help if you over compensate a little.  Plan out your purchase, research it a lot, and shop around.  There are good deals out there on kits but I saved $200+ and got a more sophisticated charger by shopping around.