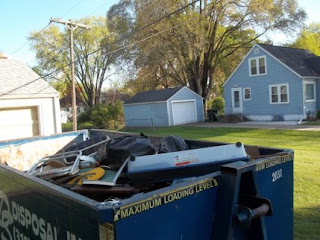 If one man’s trash is another man’s treasure, the Harris family must be related to the Rockafellers.

A little over a week ago I rented a 20 cubic yard dumpster for a massive spring cleaning effort at Dad’s…  Between the two of us, we had accumulated so many treasures that the garage was unusable and the shed could not be entered.  The upright freezer was so full that it seemed to enjoy dropping its frozen contents on an unsuspecting foot if you dared to take the duct tape off the door.  It was high time to face reality…  This sh** had to go!
Though Dad and I got off to a good start, we hit a few snags.  Shortly after the dumpster arrived, I fell sick and had a nasty allergic attack that put me in the hospital.   The same night I was allowed to go home, a number of cars on our block had tires slashed. The van was okay but I lost one of the Impala’s tires.  Dad’s Cobalt was vandalized as well. 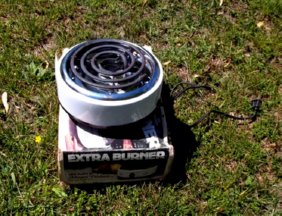 Once the car problems were handled, it was on to filling the dumpster.  Due to extreme dust allergies and the recent problems with hives, on Wednesday I decided to take some time away from the junk.  Many of the items were the kind where Dad needed to choose what to keep and what to discard.
Of a whole dumpster full of crap, I kept one item:  a single hot plate type burner that was still new in the box.  It was apparently fairly old.  Who knows where it even came from?  It can go to good use in the van and is safer than propane or butane.
While Dad was cleaning, I decided to go mushroom hunting… The morel mushrooms have been hit or miss this year but it’s sort of like playing slot machines… If your luck is good, it can be really good.  It turned out my luck was lousy!
The favorite place to hunt used to be Shaver Park in Cedar Rapids.  Once a hub of illegal activities (vice, drugs, illicit hookups, etc.) this park was closed to traffic about a decade ago after the city got tired of all the problems.  I used to enjoy finding morel mushrooms here but had not tried for a number of years after moving out of the city.  Upon returning over a twelve years later, I was dismayed to find that many of the areas had been modified, thus ruining my “hunting grounds.” 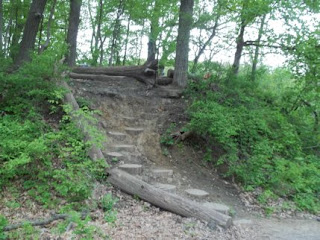 Just to the right of the horizontal tree, I used to find the nicest little patch of mushrooms year after year.  The area was cleared and this “stairway of stumps” was built.  I descended the new little stairway and recalled how each spring I would slip and/ or fall down the embankment when trying to seek out the elusive fungi.
Substantial parts of the old park were cleared and a new Frisbee golf course was added.  Well constructed trails now lead all around the area providing an excellent workout from just walking.
As I made my way around the park, I never did find any mushrooms.  Still, the walk did the body some good and offered a lot of time to think.  Maybe it’s okay not to live in the past.  The park has improved significantly and offers a new generation a clean, safe place to have fun.  There are plenty of other places to search for fungi. 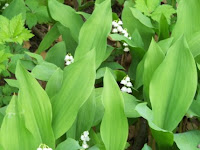 During the walk, I spotted a patch of withered Lilly of the Valley flowers.  They had already bloomed and started to die.  I remembered how Mom loved those tiny little flowers and how, as a boy, I would pick a small bouquet of them for her.  We kept them in a tiny vase for several days.
Upon rounding a corner, I saw an area protected from the sun’s warm rays.  These flowers were in perfect shape.  After snapping this little picture, I picked a small handful and inhaled the heavenly smell.  It was wonderful and fragrance made me think about Mom.  She was a fantastic cook and took such good care of us, making pies, noodles, everything from scratch.  She and Dad worked hard at difficult jobs to make sure we kids had safe, secure lives.  It’s a shame that only now as a middle-aged adult, I can understand how much they sacrificed and loved my sister and I.
After reminiscing, the walk back was enjoyable but the legs were “fried” from traversing the steep hills.  The long hike had given me plenty of time to think, plan, and relax.
Now that the cleaning project is complete, I have decided to take a little weekend trip and visit some cool places:  a trout stream, a drive-in theater, graves, and who knows where else.  There will likely be more posts coming this weekend.
As always, thanks for visiting!  Have a great weekend and enjoy each day to the fullest!
V.T.