By VanTrekker | May 7, 2012 - 10:14 PM |May 7, 2012 Uncategorized
0
SHARES
ShareTweet
In these posts, there are often references made to the “Cheap RV Living Forum” group.  This weekend I met up with “Gus” a.k.a. “Simran” whom I met online at that forum.  We agreed to rendezvous at Brushy Creek State Recreation area near Fort Dodge, Iowa.  It was a fun weekend with lots of good camping and conversation.
We met up on Saturday afternoon.  On the way up, I had to stop at the Waterloo, Iowa casino.  I walked about approximately $100 richer.  That made the trip close to free – not a bad thing! 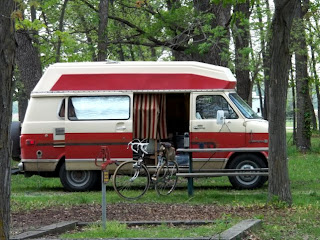 Once in the campground, it was easy to find Gus – he was in spot 42.  There were few campers in the area that day.  The other, newer camping areas had full hook-ups and plenty of fifth wheel RVs.

Gus’s machine is a 1975 Chevy 30 van in mint condition.  It is very spacious.  The high top has a great deal of cupboard space and makes it convenient to walk around or sit at a table and work.

His sleeping area is at the back near the doors.  It is cozy but really helps open up a lot of free space toward the front of the van.  It’s a cool machine! 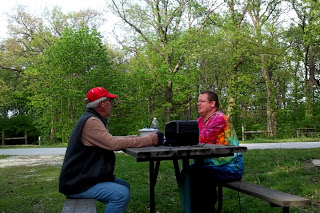 Gus is a pretty cool guy. He has a well paying job that allows him to travel in the region and work from his van. We talked for a number of hours over the weekend and tried some of each other’s food.

Gus made a very tasty mixture of black beans and rice.  I made some of the “Indian style” yellow split peas with curry, butter, onion, and a few bacon bits.

Over the weekend, I also made a pot of beef stew and a chicken stroganoff but really preferred the black beans with rice and the yellow split peas!  This made me realize that perhaps on the weekend trips, I can cook meatless dishes more often and eat less fat and cholesterol that way.  Combined with physical activity, that would help the weight loss plan, too.

Sunday also gave me a chance to zip into town for a few hours.  I visited the Anytime Fitness in Fort Dodge and got a great cardio and weightlifting workout, in addition to “washing off the funk”… Later I returned to have dinner and do some picture taking. 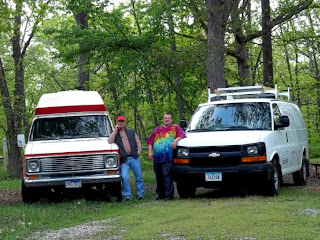 Here’s another shot of us standing next to our babies – Gus’ Simran and my Trekker Van.

Both of us had recently fixed water leaks in our roof vents and this weekend put that work to the test.  It rained both on Saturday and Sunday nights.  I seem to have fixed the leak and it sounds like Gus’ repair worked as well.

Later on Sunday night we got together and watched an episode of Burn Notice on Gus’ laptop while sitting on chairs in his van.  There was a thunderstorm passing through and it made receiving the movie (via Netflix) a little challenging.  Nonetheless, we were able to watch the Burn Notice pilot.  I liked it and will be trying to catch up and watch more of that show as time goes by.

This morning Gus and I wished each other well.  He headed off to his job and I went down to the dam to fish.  The fishing was slow and the only thing I caught was a bluegill.  I had forgotten the camera so had to walk back to the van, grab it, and return to get some pictures from the bottom of the structure.  On the second trip up the long hill, I climbed the slippery, very steep incline next to the dam.  It really put this old body to the test.   The workout this morning was a needed distraction.

Despite all the fun this weekend, I have been on the “edge of my seat” for the last few days.  Last week the doctor ordered a huge battery of tests in response to the rapid weight loss.  Normally it takes a day or two to get the results online; this time it took longer.  I about shit when the numbers came back…  The A1C (measure of average blood sugar) dropped from 10.9 (very high) to 6.0 (normal… below 6 is “non diabetic”). The triglycerides dropped from 460 to 200 (just a bit high).  Everything else looked great.  It just goes to show you that the best thing you can do is to be more active, eat better food, and enjoy yourself.

It’s about time to get back on the road again.  I had planned to go back to Dad’s today but after seeing the medical test results and experiencing the surprise and delight at the progress, the city can wait.  As a matter of fact, there’s a trout stream being stocked that’s not too far off the return path.  It is primitive, inconvenient to get to, there is no electricity, just a one hole crapper, and no Internet.  Sounds good to me. See you in a day or two…  🙂

If Gus reads this, I wanted to say “Thank you” for meeting up and I hope your weekend was as enjoyable as mine.  It’s fun to meet another who enjoys living and camping in a van.  If any of the readers are in the eastern Iowa area and would like to converse and meet up, send me an email.

Take care and thanks for stopping by.
V.T.