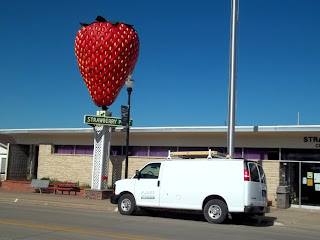 Northeast Iowa’s trout streams are some of the most enjoyable fishing venues this state has to offer.  Many of them are located near Strawberry Point, a small town at the intersection of busy highways 3 and 13.  The picture you see above is located at the city hall.  Many of the area people drop the “Point” and simply say something like “I have to head over to Strawberry today.”

As much as I enjoyed Brushy Creek, I was also looking forward to going over to “Strawberry”.  After leaving Brush Creek State Recreation Area in northwest section of the state, on Monday I headed east on Highway 20 intending to catch a fish or two.  Joy Springs, one of the favorite streams was getting stocked on Monday.  This would give me a chance to fish on Monday, camp, and fish on Tuesday. 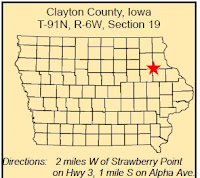 I didn’t waste any time once arriving at the park, just west of Strawberry Point.  Joy Springs is a small, completely walk-in park.  It is located near Camp Ewalu – a Lutheran campground.  During the summer it can get busy although at this time of the year it’s pretty slow.  In a few more weeks, all heck will break loose.

Curiously, Joy Springs was empty!  I started to doubt my own memory and wondered if the stream had been replenished with fish or if I was just getting goofier.

A couple of casts proved that indeed there were fish and they were very hungry.  In short order, I’d pulled in the limit of five.  Here are three of them.  Unfortunately, due to fatigue, I forgot to take a picture until after decapitating the other two! 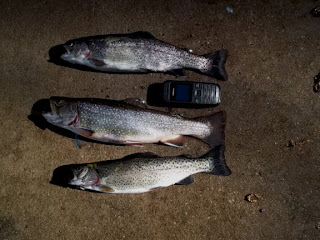 Though not huge, these are decent sized and representative of what you find in Iowa trout streams.  Most of the stocked trout are of the rainbow variety.

Monday night I slept in the van and primitive camped, if you can call it that.  For $7  I parked at Joy Springs park near the entrance.  The weather had cooled off quite a bit so it was a good call to bring the Mr. Buddy.  The propane warmth felt good to the tired bod.  I got it so warm in there (nearly 90 degrees) that it was like being in a dry sauna. 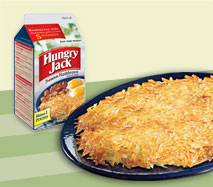 This little box contains enough dehydrated hash browns to make six servings.  You just add hot water to reconstitute them, let it all soak up, and then refrigerate what potatoes are not used.

Otherwise, you can just pour some dry shreds into a bowl, add hot water, and later brown them up.  These would even work well for making Iowa style potato salad.  You could add them in a casserole… The sky is the limit.  These potatoes are REALLY good and are perfect for taking with you. 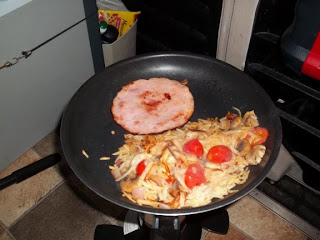 Breakfast this morning was a slice of black forest ham (from Aldi) and some of the hash browns.

There was a little bag in the Koolatron with leftover red onions, mushrooms, and cherry tomatoes.  I warmed this stuff up using a dash of olive oil and a bit of hot pepper oil.

This was all cooked next to the bed in the van at about 4:00 this morning using a propane burner that uses a one pound canister of gas.  Accompanying it was a small container of blackberries.  Yum…

The sun started to rise about 5:00.  I was already standing in the stream, soaked to the knees by cold water.  The fish population was diminished by the busy morning activity (just after stocking) the day before.  Fortunately, I was the only one in the park for a couple of hours this morning.  By 7:00 there were three decent sized fish on the stringer already.

A couple old duffers showed up, one riding a four wheeler in the walking area even though motorized vehicles are prohibited.  By then I wanted to get the hell out of there, at least away from the old timers.  They are friendly but can crowd you out of your spot.

Moving was a good strategy.   I ended up in a spot where it was difficult to reach.  The weeds showed no humans had been there recently so I knew that there should be trout in there.  The pools were deep and I battled two very aggressive rainbows.  The largest still has his head – he’s getting stuffed and baked for dinner tonight.

*** Update ***   I just baked it up.  Man, was it good.  The stuffing was chicken Stove Top stuffing (made with water), 2T of french onion dip, three ounces of imitation crab meat, 3T shredded taco blend of cheeses, and a dash of paprika.  The flavors blended well.  It was pretty tasty.  The tomcat, Jesse James, approved of the dish.
This summer I will return and try to post more pictures of the streams.  This time, I completely forgot to photograph the fishing part itself!  Things got so busy it was simply overlooked.  So was just about everything else in life.  When you are away from the hustle and bustle, so little really matters.  That’s a good thing.
Thanks for visiting.