I Prefer Snow (To Digital TV) 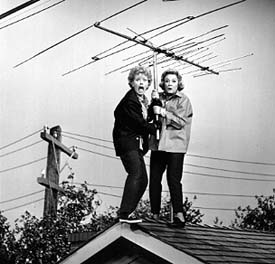 Some people will go to any heights to get a good signal!﻿

Oh, the dreaded switch from analog to digital TV…  The FCC, broadcasters, retailers and politicians made it sound so good.  “Digital is better!” and “You will ALWAYS have a crystal clear picture!” and on and on… Boy, did we get sold a bill of goods!

Yes, digital TV does have  better clarity – I love the high def – but it comes at a cost.  It can be a pain in the as* for campers.  If the signal wanes too much, you don’t simply get “snow” like in the old analog days.. You end up with an annoying stutter and no picture.  Lots of things can kill the signal, too.  The leaves on the trees, even semi trucks going by, etc. can blank out the screen.  Did we really come that far?

For the most part, I’ve been happy with broadcast TV in the van.  I’m using the boomerang style TV antenna which you can find on EBay for about $60.  Once the signal comes into the van, it is amplified with a Radio Shaft brand powered amplifier system and passed on the to TV.  It’s a pretty effective setup but there are those times in the boonies when more signal is desirable.

For some time, I have contemplated adding a removable antenna mast that would get the antenna up a little higher and still be stealthy when not in use.  The antenna would need to be stored inside and only used when the van would be stationary.  Today while painting the solar panel mounting boards, an idea came to mind… Why not mount a PVC stealth mast to the ladder rack support?
Here is what I came up with… A two piece mast that sticks up a little over three feet above the van. 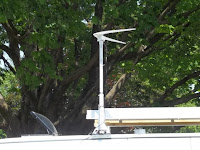 Some time ago, while working at the Home Depot, I would loiter in the plumbing aisle looking at  2 foot, pre-cut lengths of PVC pipe.  Like a typical male who never grew past playing with Fisher Price toys, I used to slide the 1″ pipes inside the 1.25″ pipes and marvel at how smoothly they fit.  I knew there had to be an application for something like this.. 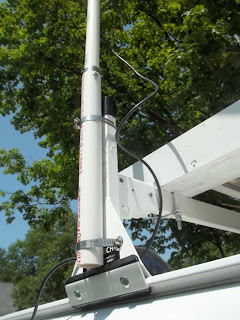 The next shot is a close-up of the antenna mast.  The outside pipe is a little larger (1.25 inches).  It was cut down by about six inches to extend slightly above the ladder rack but still be reachable from the side door.  You will notice several things:  the lower hose clamp, the upper hose clamp, and a ring of duct tape where the two pipes slide together.  The duct tape was a sort of shim intended to remove a bit of slop so that the antenna does not sway in the wind (thus avoiding making the TV stutter like singer Mel Tillis).

The two pipes are secured together by running a fastener through a hole drilled all the way through them.  I used a two inch long, 1/4 – 20 bolt and a simple wingnut.  When trying to install the antenna for the first time, I stood in the doorway of the van and, using both hands, tried to put the hardware together.  I dropped the bolt, lost my balance and almost fell on my ass.

For now the bolt is still used but what if it was lost while camping?  The next plan it to pick up a bolt and cotter pin or some other quick and easy mechanism to secure the two pipes. It would be nice to have a bolt tied to a string or wire so it doesn’t get lost if I take another tumble.. 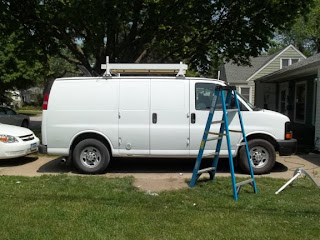 Here is another view of the van with antenna and upper mast removed.  The new plastic PVC mast holder is strapped to the rear ladder rack support.
You can see the new plastic pipe sticks up a bit higher than the ladder rack but overall it doesn’t really look out of place.  The antenna and pipe are laying to the right of the ladder. You just slip the masts together, hook up the TV coax cable, and put a bolt through the masts, adding a wing nut.  Also, the antenna is mounted to a little cap that fits snugly on the 1″ PVC pipe.  The two separate easily for transport.
Even though this implementation is not the 12 foot high antenna mast that I had thought about, it is working very well.  I fired up the TV and channel 7.3 was coming in at 75% strength.  A few hours ago, it wouldn’t even be detected in a channel scan.  The other stations in the area are all running 100% now as well – they used to be 75%.  It looks like things are a success!
I am curious what others are using for TV reception.  If you have broadcast TV in your van, car, RV, etc., please let me know.
Have fun!  Thanks for stopping by.
V.T.