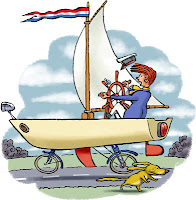 First, I wanted to thank one of the readers for a recent note about meeting up some time when north of Cedar Rapids.  I did not publish the comment in order to keep his telephone number private.  He also mentioned that usually these blog posts go up AFTER a trip – that is by design.  Since some communities frown on sleeping in your vehicle, that’s usually why I don’t post in advance.  It’s good to keep the stealth option open.  Some times I worry that too much information might be put online as well.  The idea is to be able to “fly under the radar” when it is necessary.

With Memorial Day fast approaching this seemed like a good time for a camping trip.  The forecast was for warm, windy weather.  This looked to be the last weekend of camping before the campgrounds started getting busier for the summer.

The last few days were spent in the Iowa City area at the Hills Access campground – easily my favorite retreat.  By the way, “retreat” is not a dirty word… many just tend to think of it as “giving up” in this culuture.  Whether it is a retreat, regrouping or whatever… it is necessary and fun!

After advancing on the way to retreating, I arrived at the tiny town of Hills on Friday morning, registered at the campground, and then started the seven mile bike ride to Iowa City.   The path of choice was Sand Road, a two lane highway with paved shoulders.  It is a perfect road for biking – safe, wide, and very flat.  Sand Road also connects with the Iowa River Corridor trail – a heavily used paved path that offers a scenic ride through Iowa City while following the north/south course of the Iowa River.

Riding north to Iowa City was a breeze – literally.  A fierce 25 mph tailwind helped propel me at speeds averaging 18 MPH.  That’s not bad for a heavy guy on a “cross bike”  (a hybrid between a mountain bike and road bike).  It didn’t feel like work.  (Sorry… four letter words like “work” slip out now and then).

Once I got to Iowa City, there was a slight detour to the hospital.  A friend was in the cancer department and needed a little moral support even if it just meant hanging out for an hour.  After departing from the trail, I rode up a spiral pedestrian bridge marked “walk your bike.”  Though the steep spiral bridge was ridden a month or two ago, I noticed there was much less effort this time.  From there it was on through the University campus to the hospital.

Parking was easy.  As is always the case, the hospital roads,  parking ramps, and even buildings were a beehive of construction activity.   I still did a little “ramping”  for fun.  (Taking the elevator up to the top and riding down the spiraling cement parking ramps.  It’s still fun but nowadays the bike is ridden slower and more defensively than when I did it as a crazy teenager back in the 1970s.

It was good to visit the buddy while the doctors are trying to find out what is wrong with him.  I’ve had my share of health problems but they are all reversing and disappearing.  He’s just starting to work on his.  A person needs friends when going through something like this.  In the interest of maintaining privacy, I will just call him “J”.  “J” liked having someone there to ease the anxiety.  He was extremely stressed about some cancer testing so I kept him laughing and smiling with “off the wall” quips and comments.

“J” is a character anyway.  He’s a large framed, part Latino guy in his thirties.  “J” is balding in the front with the back of his long, curly/frizzy hair tied up with hair clips that match a giant red purse and flip flops.  If a person can’t spot him as being just a bit effeminate then surely you will hear him unless a person is either naive or has significant visual and/or auditory difficulties.  (Nope, I didn’t include a famous historical reference.)

Nonetheless, “J” has a big heart and is a fun guy.  We are all different and that’s what makes life so enjoyable.  Anyone who reads much of this blog can identify the author as a bit of a character as well.

At one point I had “J” shrieking with laughter.  People kind of stared at this crazy guy (who looks like a Latino version of Larry from the Three Stooges after an “eye poke”).  My appearance wasn’t much better – I was wearing biking shorts and an obnoxiously loud tie dyed shirt more appropriate for a job  as an extra in an Austin Powers movie.  I never stopped to think what people thought.  Who cares anyway?  It was a fun visit and a friend felt better.  It’s Iowa City – a college town – and a person sees everything.. or perhaps doesn’t even notice!

After leaving the University, it was time to bike back downtown for lunch.  My sister had recommended trying a newer restaurant in the pedestrian mall section of Iowa City near Old Capitol Mall.  It is called Mesa Pizza.  Their food was delicious! 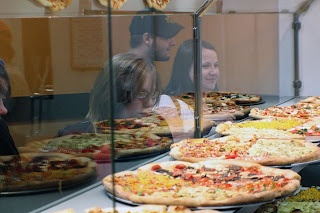 The restaurant specializes in pizza slices though it is my understanding that one can order whole pies and other menu items.  The individual pieces of pizza are the true stars.  There are a number of large, fresh pizzas under the heat lamps.  Each pie is divided into four sections with different choices of toppings.  A customer selects his/her slices and then the portions are warmed for a couple minutes in a brick oven. The crust is actually a little charred on the bottom but it works – I liked the crunchy bottom on the hand-tossed style of dough. 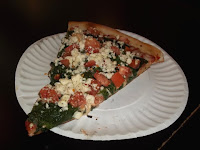 There was a nearly overwhelming variety of offerings – gyro pizza, Mexican style toppings, vegetarian selections, etc.  It was difficult to find a plain old sausage mushroom pizza.  Most everything was gourmet… That kind of distressed me a little…  It meant having to break away from the mundane and trying something new.

With a bit of trepidation, I ordered a slice of southwest taco (with spicy mayo) and a veggie combo of tomatoes, basil leaves, and feta cheese.  This took an act of courage because to me pizza is only meats and cheeses with tomato sauce.  To tamper with this paradigm was… irreverent at the least!  But change is not always a bad thing.

As you can see, the slices are visually appealing and quite delicious.  Only the veggie pizza is shown because the southwest taco pizza did not photograph well.

This is now a new destination for future trips.  In fact, I plan to procrastinate on Sunday and have another slice or two before heading back to Cedar Rapids.  Mesa Pizza is going to get 5 stars when I review it on Yelp.com.  You cannot find better pizza slices in this area.  It’s that good!

After enjoying lunch, I decided to head back to the campground early.  The weather was quite warm and the southerly winds were increasing in strength.  A warm front was passing through and bringing a taste of summer along with.

The ride back was nothing short of grueling.  The first couple of miles were along a trail where the tree canopy helped shield a person from the wind.  The last five miles were on the open road.  At times, I could only muster 6 miles per hour (about 10 km per hour).  Progress was slow and frustrating, especially with the dehydrating effect of the sun.  Like a dang dummy, I didn’t stop to rest periodically, rather opting to “tough it out.”  Duh… Isn’t this supposed to be FUN?   Old habits are hard to break.

After arriving back, the body was utterly exhausted.  I drank four 1/2 liter bottles of water and cranked up the air conditioner in the van.  This was the first real test for the Sunpentown 9000 BTU portable a/c.  In about fifteen minutes, the van temperature had dropped from 92 degrees to 72.  I was impressed – and very comfortable!  The exhaust house was run through the driver’s window and was blasting hot air out as the air conditioner chilled the weary occupant.

By this time there was little energy left in the bod.  The sun and wind had taken a great toll.  Dinner was a simple red beans and rice dish with some cut up turkey kielbasa sausage. By then I was ready to crash for the night… Since there was no schedule, it didn’t matter if a person went to bed early.  Resting after a good workout is one of the best ways to unwind.  I spent the rest of the evening (when not dozing) reading part of “The Invisible Man” (by H.G. Wells) on the Kindle.

Though Friday was a peaceful, tranquil day, Saturday was much different.  It was much more physically demanding and some problems arose along the way.  I will post about that later today along with more pictures.  In the meantime, in another hour Mesa pizza will be open and you’ll see me there…. tie dyed shirt and all.  I can’t to try something new and different.  How much difference a day or two makes!

As always, thanks for visiting!  Go do something new, spontaneous and relaxing today!  Make it a good one.  🙂

5 Responses to Weekend Trip to the Iowa City area