Kohlrabis, Camping, and a Camcorder

Saturday was another great day…  Well at least it started that way.   Things were peaceful Friday night at the campground and I had slept like a rock.  After a quick breakfast of red beans, rice, and sausage, it was time to put the bike on the road.  After strapping the small camcorder to the handlebars of the bike (you can see where the mistake is going to happen), I got an early start and arrived in Iowa City around 6:45, in anticipation of the Farmers Market.  That turned out to be a miscalculation – they didn’t open till 7:30.  Along the way, I made a lot of videos of the beautiful ride.

Once the Farmers Market opened for business, I visited Dyed Happy, the best tie dye vendor in the area.  The owner, Mary, noticed the weight loss – I had not seen her since last fall.  She sold me this new shirt with a unique, camo sort of look to it.  The colors are predominately green with blue, and a touch of yellow and orange.  It was unique – much more subdued than your typical tie dye.  It’s perfect for camping, fishing, etc.

Farmers Market is like heaven.  There were so many healthy, colorful veggies to choose from in addition to the usual baked goods and craft creations.  Though I sampled truffle candies, salsa and such, due to limited space only the dinner items could be transported back on the bicycle.

There are a number of breakfast vendors selling burritos, biscuits and gravy, omelets, and such.  There was so much temptation!  The breakfast chosen was healthy – two non-fried Vietnamese spring rolls with spicy peanut sauce for dipping.  Great stuff!

For dinner I bought a small top sirloin steak.  The vendor was from a locker plant in Mount Vernon, Iowa.  The steak was frozen solid when it was purchased.  Can you believe the meat stayed cold for five hours simply by wrapping it in an newsprint type ad booklet and carrying it in the bike pack?  For dinner I also bought some large green onions, kholrabi, broccoli, baby red potatoes, and a chibata roll.  All this stuff fit in the canvas pack on the bike but it was a tight fit.

From the market, I visited another Anytime Fitness location and had a great upper body weight workout.   It was also a good chance to get a quick shower.   Had I known what was going to happen in the afternoon, this workout could have been skipped but nobody knows at the time.

The weightlifting workout really kicked the appetite into full gear. Lunch was at another favorite restaurant – The Bread Garden, an upscale organic grocery store and deli. They have the most incredible salad and hot food bar… Some of the food is very heavy – it would not work for people about to run a marathon.  For a person on a casual bike ride it was just fine; the meatloaf, mashed potatoes, fresh fruit, etc. really hit the spot.   I also grabbed a number of butter pats to take with me for use cooking the evening meal in the van.    🙂

With the belly full and the energy level rising, it was a good time to ride around town and take more video shots of the many sights.   Keeping the mini camcorder perfectly positioned in the cell phone holder on the bike was a challenge. I was delighted with the many videos made and was planning to put together a sped up montage of sights for the blog.

After the last video was made, the weather started changing.  The sky clouded over and the temperature had warmed considerably.  The wind became fierce and unrelenting – even worse than the day before. I started back to the campground with a 30 mile per hour headwind.  This time a stop was made about every mile to rest the legs. That worked.  I was pleased with being able to get back in better condition than the day before despite the intense headwind.  Unfortunately, the satisfaction following the ride was short-lived.  After returning to the van, I suddenly realized that the camcorder was gone.

The mini video recorder had apparently fallen from its position on the handlebars.  Worst of all, the legs were like jello and there was no strength left to go back and look for it.  Water, rest, and and food had to take priority at that point.  After switching on the air conditioner it was time for a blissful power nap in the 73 degree van.  (It was 87 degrees outside!)

Some time later, a most pleasant aroma woke me up.  The stomach reminded me that it needed some food.  The guy parked across from the Trekker Van had built a campfire and was roasting some kind of animal flesh over what smelled like hickory.  The caveman instinct decided it was time to eat – to hell with the camcorder! 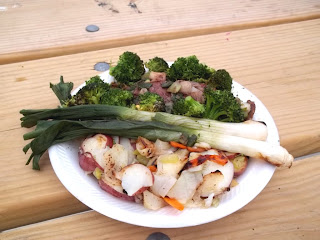 Dinner was the top sirloin steak (seasoned with Cookie’s brand flavor enhancer) and cooked in an aluminum foil packet with lots of green onions.

I also used foil to steam the broccoli as well as to make another side dish of potatoes, onions, carrots, kohlrabi, and butter packets.

The leftover green onions were also cooked in a packet over the campfire coals.  As you can see in the photo, the steak was almost eclipsed by the boatload of veggies.  The ten ounce steak was buried under the broccoli. 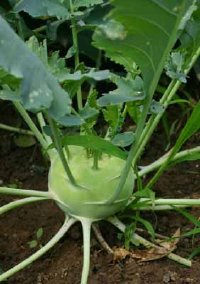 Though the meat was tasty, it was the veggies that really made the dinner special.  The best part was the kohlrabi (pictured at the right).
If you have never tried one, you owe it to yourself to check out this veggie.

The foil packet method over coals is a convenient way to cook a wonderful meal.  I imagine most camping enthusiasts have tried this technique but if you haven’t, give it a shot.  You will be impressed with the results.  Not having to do dishes is an added bonus!

The dinner of nutritious veggies and steak soon delivered a boost of energy.  I hopped on the bike and used the fierce tailwind to boost the speed (with memories of Star Trek “wormholes”) as I raced back to Iowa City again, searching for the camcorder.  After reaching where I last remembered making some video clips, the camera nowhere to be found.  Disappointed but not surprised, I turned into the wind, uttered a few expletives, and started south using the invisible force to work out the frustration.

The first couple of miles were challenging – every bit as much so as earlier in the day.  By this time the sun seemed fatigued and started lazily hanging its head.  The wind began to weaken and I started kicking the bike up to 10, 11, 12 and 13.5 miles per hour…  The headwind remained though it was much weaker at this point – no longer a challenge.  The return trip to the campground made me feel good – the camcorder was still lost but at least I had tried to find it, despite the wind.  Even though mother nature and fate tried their best, they couldn’t ruin a perfectly good day!

After returning to the campground, I ran into some interesting people who were camping next to the Trekker Van.  They had an older camper built on a Chevy chassis.  We’re likely going to likely meet up again soon.  It’s true – you really do meet nice people while out and about.  It will be a fun summer.

That’s about all for now.  It’s a shame that the camcorder was lost but it’s no big deal.  There’s still one  camera left – the one I really depend on for the blog posts.  Stuff happens.  It’s how a person reacts that makes all the difference.  I can’t wait to return for some more kohlrabis and camping.

Thanks for visiting!  Take care.

4 Responses to Kohlrabis, Camping, and a Camcorder