Clear Lake Trip Day 2 – From The Barrel to Buddy Holly

Rain, rain, and more rain… What a way to start Thursday.  After writing up Wednesday’s blog post, it was time to think of something to do on Thursday.  I didn’t want to ride the bike – the streets were too wet but eventually they started to dry off.

While running errands, I passed by an eatery called The Barrel.  It looked like an old style drive-in restaurant – the kind you had to pull up to and a cute bimbo on wheels would deliver the food to your vehicle.  That sounded like a fun idea but the van doesn’t exactly fit under low clearance structures.  It’s a mistake you don’t make a second time. I made the mistake once (BEFORE putting up the solar panel)…

As I drove by the restaurant while searching for somewhere to have lunch, it became apparent that nobody was eating outside – the old style menu boards were all out of order.  Hmmmm… A restaurant that said “The Barrel Drive-In” and there was no drive in?  That was too peculiar for me not to stop. 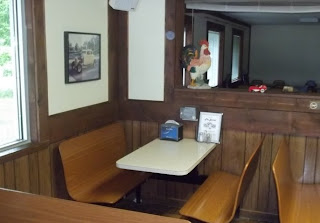 I walked into the diner and a cheerful lady (who had to have remembered the Buddy Holly era) told me to take a seat.  The menus were at the table and you just press a button on a speaker box on the wall to place your order.  Cute!

After selecting the two piece fried chicken lunch special, I pushed the button and a voice squawked, asking how she could help me.  I requested my food and the muffled, badly distorted (but cheerful) lady thanked me.

The food came in a reasonable period of time.  You have to pay immediately when it arrives at your table.  That was a bit unexpected but didn’t bother me at all.  It was friggin’ delicious.  The fried chicken had a down home taste unlike KFC, or any other franchised birds.  As I finished up, the waitress suggested dessert.  They have twist cones and I was advised it was a favorite from “back in the day.”  Not to buck tradition, I ordered a “small” one to go.  It was so large (but not as big as the sign) that I could only eat part of it.  As part of the moderation thing, no food is off limits as long as the quantity is restricted a bit.

After the great meal, I drove out north after carefully researching exactly where the plane crashed that carried Buddy Holly, Ritchie Valens, and the Big Bopper.  It is way out in the boonies but surprisingly close to what is now Interstate 35.  As the articles state, the site is very neat the Clear Lake airport.  The edge of farmer’s field is marked with a large pair of “Buddy Holly” glasses as you can see in the picture. 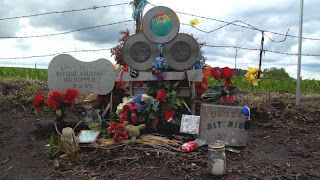 The locals told me that there is a makeshift memorial about a 1/2 mile into the muddy field.  I trudged through the dirt and located the site as you can see from these pictures.  There were all kinds of artifacts placed to honor the dead music heroes.  The most fascinating part was the memorial with three records.  I will try to post a close-up.

Up to the point of seeing this place, I had been agitated all day.  Mom was a fan of music from that era and somehow I knew this was a place that had to be visited – it was kind of like a sixth sense telling me to go there… In the great beyond, I hope Mom can see this through my eyes.  I can tell you this though… Even after more than fifty years, you can feel an almost supernatural sense of sadness, loss, and pain.  It was a strange feeling to say the least.

After returning to the van, the  weather had improved.  I drove back to Clear Lake and did a weightlifting workout at Anytime Fitness.  I hope they forgive the “Buddy mud” that was tracked in from the farm field.   Note to self – bring more shoes on these trips!  Oh well… It was a good workout at least.  It’s fun to slip those in between activities.

The afternoon was spent fishing at the west end of Clear Lake near the campground.  I did catch two small bullheads – neither worth keeping.  A walleye also hit my worm but he was too small to take out.

I spoke with a young man who works for the Department of Natural Services.  He recommended visiting Rice Lake – a body of water near the Minnesota border – to find the elusive bullheads. I’m just “bullheaded” enough to give it a try.

So the plan for Friday is to go to Rice Lake in search of the elusive fish.  Hopefully there will be some fish pictures coming soon.

Have a good weekend and thanks for reading.
V.T.