In Search of the Best Falafel

By VanTrekker | June 12, 2012 - 5:42 AM |June 12, 2012 Uncategorized
0
SHARES
ShareTweet
Over the course of the last two days, I’ve eaten four falafel meals – three at restaurants and a meal I made in the van.  It was easy to spot the weakest contendor – my own.  But yet when it came to biting into the pita, one of the restaurants fell far short – I preferred the stuff made in the van over one of the purchased sandwiches!
Sunday morning I arrived at the Hills Access campground (south of Iowa City) at morning “check out” time and was delighted to see that it was nearly empty.  In speaking with the ranger, he advised that Saturday was slow and, predictably, Sundays are usually even slower – most families have to work on Monday.  It was a perfect time to camp.  Due to temperatures being in the low 90s, I made the decision to plug in and run the air conditioner.  Boondocking could wait till Monday.

The bicycle ride into downtown Iowa City (about eight miles to the restaurant) was a breeze – about 20 miles per hour worth of full blown tailwind.  The new bike performed beautifully, often sustaining speeds over 20 MPH… That’s not a bad velocity for a “cross” bike with a heavy rider.  I was passed one time by what looked like a young cadaver on razor thin tires.  No problemo – I remember those days of having to go everywhere at warp speed.  It was nice to just enjoy a brisk pace – no need for speed.  Unfortunately, with all that tailwind there was nothing in the way of a cooling breeze.  Between the 90+ degree weather and high humidity, the clothes were soaked and the belly was empty as I pulled into town. 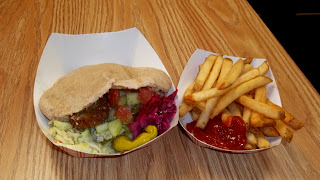 The first place visited was the Oasis Falafel Joint in downtown Iowa City, near the landmarks of Pagliai’s Pizza and The Hamburg Inn.  The falafel sandwich you see in this picture also contained hummus, Mediterranean salad, and babba ganoush.  The Mediterranean salad is basically cucumbers, tomatoes, onion, oil, and lemon juice, and olive oil.  Babba ganoush has roasted eggplant and tahini (sesame based) sauce.  As you bit further into the pita, there were more and different flavors to savor.

From the condiments bar I added green and red cabbage salads as well as the optional spicy jalapeno sauce..  The various flavors were pure bliss.  This is the good sh**.

The french fries in this picture are the natural cut type and I believe they are homemade.  French fries is something I don’t often eat due to the fat and carbs but they sure were good!

Because of the high wind and heat, I decided to head back to the campground early, crank up the air conditioner and sleep all afternoon.  The 9000 btu a/c in the van pulled the inside temperature down to the low 70s.  After a long nap, it was time to cook dinner.

The second contender was a box mix falafel.  I mixed it up, brushed the patties with olive oil and baked them in the toaster oven.  The falafel from the box is okay, but not worthy of more than a couple stars out of five.  Had it been fried, the flavor might have been a little better. Still, it was okay.  It was cheap!

What made this pita sandwich taste surprisingly well was a store bought “dry” salsa containing pineapple, mango, red bell pepper, cilantro, and jalapeno.  I also used generous amounts of “redneck tzatziki sauce” (sour cream based french onion chip dip with added dill, shredded cucumbers, and a bit of garlic).  The “redneck tzatziki sauce” was so flavorful that I had some with pita pieces for breakfast, too!

The fruity salsa worked great with the cucumber tzatziki sauce.  No, it wouldn’t make the cut on the Master Chef TV show… not unless Jeff Foxworthy, Rodney Carrington, and “Larry the Cable Guy” were judging.   Still, I’d eat the homemade falafel again – something I cannot say for the next place that was tried. 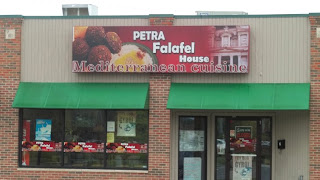 After a good night’s sleep on Sunday, I got up late and decided that the next restaurant to sample would be the Petra Falafel House.

It was quite clean inside and looked inviting.  I enjoyed watched the the gentleman fry the little coin shaped falafels while he argued (in a different language) with someone on the phone.  It’s amusing how you don’t have to understand a word a person is saying to discern cross words. 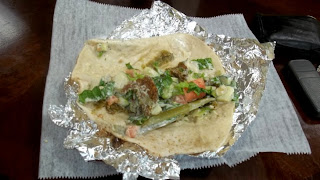 Unfortunately, I was a little taken aback at the sandwich when it arrived.  Often this type of fare is presented on a soft pita bread with the various colors evoking a mouth watering feeling of hunger.  Not so in this case.  The food was concealed in a shroud of aluminum foil… not a bad idea in this case.  It was a little disappointing.

The sandwich was served on what looked like a giant tortilla.  It was up wrapped tightly in a fashion similar to a rolling up a burrito.

When the shell was unfurled, I was let down by what was inside.  The falafel itself was hot and actually quite tasty but there weren’t many other ingredients other than some sliced dill pickles and mystery relish.  I don’t want to say anything too bad about this place though because it is somewhat popular.  However, I did not think the food was on a par with Oasis.  It made me feel better about my own cooking attempt last night!

After the meal, I was still a little hungry.  The idea was to check out Nile Valley restaurant for yet another falafel fix.  Unfortunately, I could not locate it (it was not where the listings said) and the phone number did not work.  Oh well…  Maybe it closed?  Who knows…?  Another visit to Oasis sounded better anyway!

After running a few errands in the van, I stopped back at the Oasis Falafel Joint and indulged one more time but this time only ate a half sandwich.  Dang, was it ever tasty!  I can’t wait to take my sister there when she visits.  She knows all too well how good the food is in this college town.
Thanks in part to its large university population, Iowa City has a rich cultural diversity which is reflected in the many outstanding ethnic restaurants.  We have some of the finest Indian, Mediterranean, Latino, Italian, Oriental, and German establishments that you will find in the midwest.  Of course, there is good midwest style cooking, too, but that’s everywhere in Iowa!   Discovering exciting new ethnic foods and places to hang out makes each van trip even more fun.
I realize it seems like eating is all that seems to be discussed but there’s no shame in enjoying new foods, cooking, and discovering places to recommend.  It’s fun to share them with friends, too.
Thanks for visiting Iowa through this blog, a little portal to some of the fun things to do around here.  I hope that if you have never tried falafel you buy a box mix and give it a shot the next time you go camping.
Have a great week!
V.T.