A Spontaneous Trip – The Gothic House

From the blog posts, you might not know it but I am usually a pretty organized person when planning trips.  Usually I’ll mull something over for days before putting together an outline of planned activities.  Not so this time.  This trip was completely unplanned!

I was about to head back to Cedar Rapids today (after the falafel trip) but decided at the last minute to go fishing and visit the “Gothic House” in Eldon, Iowa.  This house was featured in the Grant Wood painting, “The Gothic”.    More about that in a minute.

The trip south took me through the little town of Fairfield, Iowa.  Fairfield is a diverse community thanks in part to the Maharishi School of Management.  The Maharishi school is well known for their eastern beliefs and claims of physical levitation during transcendental meditation.  As a result of the influx of foreigners, this small town has enjoyed a rich cultural diversity and thriving economy… despite having a Walmart.  🙂

Above is an eye catching mural painted on the Stephen Sondheim Center for the Performing Arts.  Fairfield is adding more murals as part of their art program.

While driving through the town, I noticed a store called Everybody’s Whole Foods.  That was worth a stop!  I picked up some tasty hummus and pita chips for a little late night snacking.  Thank goodness they took food stamps.  😉

It was at the whole foods store where lunch was eaten.  Attached was a small restaurant called The Crepe Escape Cafe.  This was the first time I can remember eating a French crepe.  It was exquisite and beautiful.  Sadly, I forgot to bring the camera.  For those who like crepes, you can identify with the near orgasmic bliss of this decadent food.  The local favorite was my choice – a California style crepe which contained organic jack cheese, organic avocado, artichoke hearts, black olives, organic salsa, and organic sour cream.  Wow!  My comment to the owner was that the crepe was “incredibly delicious!” By this time it was a little after noon.  I meandered the rest of the way to the town of Eldon and visited the “Gothic House” and visitor center.

The kind ladies there helped me dress in traditional garb and were kind enough to take some flattering pictures.  I tried to look stern but the pained expression you saw in the opening picture looked more like a person trying to stifle a falafel fart. 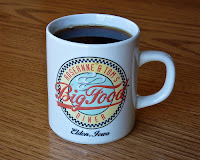 There is actually a resident in the famous little house.  It is rented by a lady – an artist – who lives there and makes tasty pies on the weekends.  I didn’t know the pies were only available on weekends.  That’s okay.  The blood sugar didn’t mind the missing carbs.  Perhaps during the next visit.

Did you know that Eldon is famous for another reason?  Back in 1993, Tom and Rosanne Arnold opened a little diner in Eldon.  Their signature item was the “loose meat” sandwich… a crumbly style hamburger in which the bun soaked up the greasy meat juice.  I had one back then.  It rocked.  Loose meat sandwiches are a midwest favorite.  But sadly the diner closed a couple years later – a victim of Tom and Roseanne’s nasty divorce. 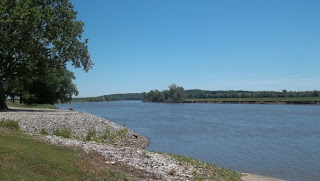 After visiting the Gothic House, I decided to do a little biking.  There is a small asphalt and cement trail leading downhill from the Gothic House and visitor center.   I rode it into town where it ended about a mile later.  Everything worked out okay because the trail led into a road that paralleled the Des Moines River. I rode for about an hour and took in the breathtaking scenery.

Here is one of the views of the Des Moines River.

At the time of this posting, the van and I are a little further upstream in the town of Ottumwa, Iowa.  They have paved levies and trails along the river…  That means another bike ride tonight.  If there is sufficient energy, I hope to visit Anytime Fitness for a weight workout and shower.

** Wednesday update   **   I went to Ottumwa and rode one of their biking trails into an older section of town.  Some young people pulled up in an SUV and lobbed something at my bike nearly causing me to go down.  It was a water balloon.  Thinking quickly, I called in the license plate to the police.  It is possible that charges may be filed against the little S.O.B.s.  No problem – there are more trails to explore should I need to return to testify!

The Ottumwa Anytime Fitness was an awesome facility and a great chance to work off the nerves / adrenaline that had kicked in during the eventful bike ride.  Anytime Fitness is practically an oasis for van campers and van dwellers.  Clean, comfortable, and affordable, these gyms have saved me from having to add a shower to the van.  There’s nearly always one near where I’m headed.

After starting to return, fatigue set in.  I camped at the Grinnell rest area on Interstate 80.  The attendant told me van campers are welcome as long as they only stay 24 hours or less.  It was a great night’s sleep.  Now it’s time to head back to Cedar Rapids and regroup a bit.

Don’t be surprised where each day takes you – just enjoy each to the fullest.  Have a crepe.  Hold a pitchfork.  Dodge the water balloons… Have fun….
Take care!
V.T.

10 Responses to A Spontaneous Trip – The Gothic House