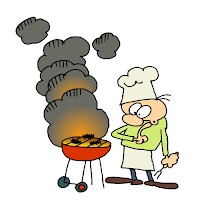 For many of us there is nothing that satisfies like a thick, juicy hamburger.  Though I love hot dogs, I have to question if they are truly the favorite American food.  Perhaps on the east coast… In the midwest beef is plentiful and locally raised.  I’ll take some black angus beef any day.   A tasty burger doesn’t contain pig peckers or cow guts…  By the way, did you know hot dogs are grey?  They have to add red food coloring (and a ton of salt) to make them look and taste so yummy.

Don’t get me wrong – I like hot dogs – but a truly memorable burger is easier to create on a camping trip…    Has any else here made their own sausages?  It’s way more work to stuff the natural (intestine) casings…

The nice thing about burgers is that it’s kind of hard to screw them up.  Unless cremated or raw, they are pretty forgiving.  But there are easy ways to make burgers better.  Recently Dad and I sat in on several hours of grilling classes at the local hardware store and I learned some cool tips.

The grilling skills out there run the gamut.  I thought I was king of the grill at one point but am learning new stuff every time I camp out.  Open your mind, be flexible, and grow your grilling expertise.

First of all, the most important thing is to buy good quality meat.  Many grocery stores now sell various cuts of beef and pork that are injected with 12% “flavoring solution”… The solution adds sodium to the diet and the water can cause meat not to fry properly.  I recently bought some stew meat that wouldn’t brown – the more I cooked it the more water ran out!  Buy your ground beef from an old style meat locker or ask the local grocery store butcher for ground beef without added flavoring solution.

Cutting fat too much kills the flavor.  I’m going back to using 85% lean ground beef (instead of 93% lean).  If you cook 85% (15% fat) ground chuck to a well done state, much of the additional fat cooks out, according to the Iowa Beef Industry Council person I recently chatted with.  We agreed that the 93% lean stuff works great for sloppy joes, tacos, etc. but for really tasty burgers, the more fatty cuts are superior.  From my own experience, I can be content with one excellent burger where as it would take most of a skillet of lean sloppy joes before I was satisfied.

Once the meat is acquired, many people like to add a variety of ingredients to the beef.  Some of these include Worcestershire sauce, liquid smoke, cheese, bacon, onions, garlic, spices, bread crumbs, onion soup mix, barbecue sauce, etc.  Some cooks are purists, only seasoning with a little salt and pepper to allow a person to concentrate on the beef flavor.  I’m sort of in between, opting to keep the sauces such as ketchup or barbecue on the side and use them at will for dipping.

I like to add cheese but do not do it until the end of the process (just piling on a slice of cheddar or sprinkling some bleu cheese).  My experience has been that cheese mixed into the meat usually cooks out or burns during the cooking process.  I like to add finely chopped onions or garlic to the hamburger.  If making the burgers for only my own consumption, I add pickled jalapeno slices and bacon bits, then top it off with cheddar.  The heat of the peppers and the salty brine from the jalapenos nicely season the meat.  Though I like cheddar or American cheese, I prefer bleu cheese on burgers; it adds a sharp flavor, creaminess, and some salt.

You can make the patties any size you wish – I prefer about three to a pound but you could as easily make four.  Gently pat the ground beef into patty shapes but do not overwork the meat.  Squishing it tightly will make a tougher burger that cooks slower.  No burger presses for me!  God gave me two hands for that.  Once the patties are formed, set each onto a plate and, if desired, season one side.  Turn them over. 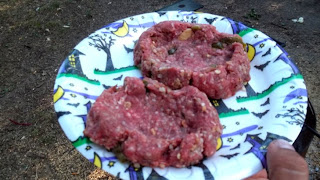 The next trick is so easy that most of us should have thought of it…  You know how often you eat a  burger that has swelled into a dome shape and the toppings slide off?

Restaurants (such as Culvers or Steak ‘n’ Shake) often get around this by beating the burger into submission with a spatula.  There is no use trying to kill the cow a second time.  It’s dead.  It’s not gettin up.

Using either your thumb or a spoon, press a 1/2 inch deep indentation into each patty.  When the meat cooks and swells, the patty comes out level.  No more toppings will be sliding off.  After pressing the well into the patty, season this second side of the burger.

For this trip, the burgers were cooked on a charcoal grill at the park.  Some people are sticklers for cleaning the grill surface, but I’m not… Just a good wipedown with a green scratch pad and some water (basically to remove food chunks) is good enough for me.

After the fire is started and the grill is warmed up, it is a good idea to oil the grill.  Take a paper towel, fold it over a few times, and use some tongs to rub a coating of oil on the grill.  I like to use olive oil due to the high flash point.  It’s the only oil I cook with 95% of the time.  Repeat the process.  The oil will burn and form a polymer on the grates, helping the meat not to stick.

Place the hamburgers on the grill.  Do not smash the burgers down at any point when grilling.  Otherwise you will lose the juice and flavor.  Cook for about 4 to 6 minutes on the first side if using a hot bed of coals.  If cooking a ways above the heat, it will take longer but it’s worth it – I like the flavor and texture better.  When it is time to flip them, slide a spatula under each patty.  If the burger tears, stop and let the meat continue cooking until it no longer sticks.  You will know when each patty is ready to flip when it disengages easily.

After turning the meat, continue cooking the other side until you reach the desired doneness.  I like using a meat thermometer to check the progress.  Medium is about 160 degrees but I prefer 170 degrees (well done).  You can actually pull the meat off 5 or 10 degrees below target – it will continue cooking and the temperature will rise a bit more.  I would rather undercook a piece of meat and have to warm it further rather than burn the sh** out of it.

After pulling the meat, let it sit on a platter under a dome of aluminum foil.  This will let the meat rest and allow the juices that have boiled to the top to sink back into the burger. 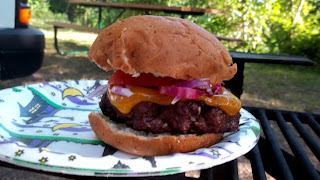 This hamburger was mixed with bacon bits, onions, and pickled jalapeno pepper slices.

At first I was not sure if this was a memorable burger.  It was pretty decent – one of the better efforts so far.  But it was second burger that clinched it.  By this time the coals had cooled off a little.  I had some extra meat left and made one last patty.  It took a long time to cook to medium well.  It was considerably different!  By grilling it slower, the burger was more juicy, tender, and flavorful.   Though both were from the same batch, the second burger was far better – simply by cooking it slower.

The second burger had no cheese on it.  That was actually a positive… Though I like cheese, it can mask the meat flavor.  Secondly, I had completely forgotten to use seasoning salt on the meat.  The first hamburger was just a touch bland.  By the time the second one had cooked, the onions and garlic had cooked down and the flavors had permeated the meat – it was delightful.  The second was a memorable burger, possibly the best I’ve ever cooked.  The only real difference was time and temperature.

There you have it…  There is nothing earth shattering but perhaps a few things to try if you haven’t before.  Good quality meat, gentle handling, adding the indentation, and cooking to the exact temperature (only once per side) will help ensure ooohs and ahhhhs from those enjoying your grilling! 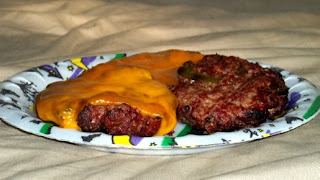 Below is what was mixed in with the ground chuck.  I would normally add just a touch of seasoning salt but this time it wasn’t needed.

Have fun with your burgers… Can I please get one medium well to go with a cold Budweiser?

Combine the dried garlic and dried onions with 1/2t of garlic salt and 1/2 cup of water.  Let sit for fifteen minutes to a half hour.

Drain the reconstituted garlic and onions saving the water.  (you can use it to baste the burgers, put it in mashed potatoes or dressing, etc.)

Massage the onions, garlic, jalapenos, and bacon bits into the ground chuck until just mixed – don’t overwork the meat.

Form into 3/4″ or 1″ patties using your hands.  Make a half inch indentation in each burger using your thumb or the back of a spoon.  Season lightly with salt and pepper or use seasoning salt, if desired.

Grill to desired doneness only flipping once… Enjoy!

One Response to Awesome Burgers Make Camping Even More Fun!