Back to the Old Grind 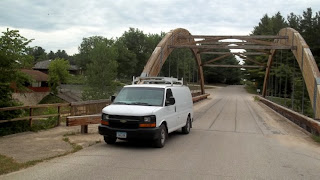 Bridge over Otter Creek – Fontana Park, Buchanan County, Iowa
Saturday was another fun and challenging day.  After a fantastic night’s sleep of camping at Fontana Park and some memorable burgers, it was on the to the city of Waterloo.  On the way out I stopped at a small farmer’s market in Independence, Iowa.  This town has a beautiful old grain mill that is currently under restoration. 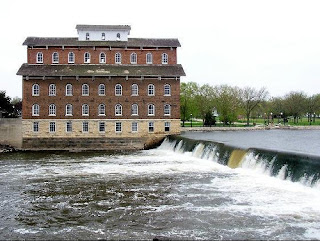 The mill is located along the Wapsipinicon River.  Otherwise known as “the Wapsi”, this normally peaceful river carves a scenic path through northern and east central Iowa.
The waterway is also notorious for flooding and the mill has been ravaged by raging waters many times over the years.  Thankfully, the landmark is being restored because it is such an important part of the city’s history and identity.

In addition to the old mill, Independence was once a busy railroad town. The old train depot has been renovated and is a fun place to stop on the weekends.   It’s right off highway 150 on the way from Cedar Rapids to Hazleton.  Staffed by volunteers, the depot offers a lot of old pictures and memorabilia to browse.  They have a small gift shop with a number of cool items – I keep one of their magnets on the van door.

Camping opportunities abound around the mill and at other locations nearby in all directions. There is a newer campground on the south side of town and I spotted another on the east side a few weeks ago.  Of course, being a small town there are blocks of connected main street buildings with common parking lots behind them for those who might wish to stealth camp.

After leaving Independence and vowing silently to return (while munching on pumpkin-apple bread from the market), I drove west on old Highway 20 toward Waterloo.  Waterloo is known for many reasons including having a large manufacturing facility for the John Deere tractor company.   Its sister city, Cedar Falls, is the home of the University of Northern Iowa  (Go UNI Panthers!)

For a combined population of 110,000 people or so, the Cedar Falls area has a whopping 65 miles of urban biking trails and a total of 105 miles of trails in the area.  It’s a bike rider’s paradise.  I was eager for a long, easy ride.

The temperature that day was a perfect 83 degrees with a slight wind blowing.  Though it was threatening to rain, I ventured out anyway and thankfully the precipitation held off. 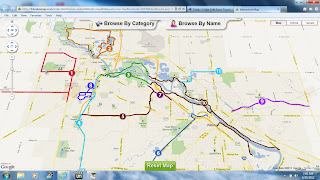 Many miles of the area trails are parallel to major traffic arteries making it very convenient to get from place to place throughout all parts of the city.  The paved trails are well maintained and safe. 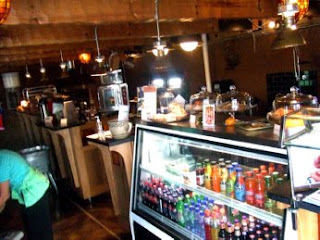 Near where I started there is a Veterans Memorial park in semi-industrial area in Cedar Falls.  It turned out to be a perfect place to ditch the van for a few hours of bike riding.

At that location there is a small cafe/ coffee shop called “The Kickstand” which has cookies, desserts, burgers, drinks, etc. for bike riders.  It’s a fun place and the lady working there is so sweet!

The Kickstand has some of the most incredibly delicious cookies you will find on earth.  If you make it here, you will be delighted.  Buy at least two.  By the time I got back I had eaten the first and only cookie purchased.  Much to my chagrine, The Kickstand had closed for the day.

Here is an article about the little shop.
http://wcfcourier.com/business/local/bike-stop-couple-open-business-that-caters-to-trail-riders/article_a0d83b4a-a647-11df-bf3e-001cc4c002e0.html

As I headed south on the first leg of the ride, the terrain varied but was, for the most part, fairly flat.  From business to residential areas, to woods, the scenery was constantly changing.  Further south is a newer area full of big box stores and parks.  Eventually the trail led out to the country where I was able to pick up another path (along Sargeant Road) that headed back into a different part of town. 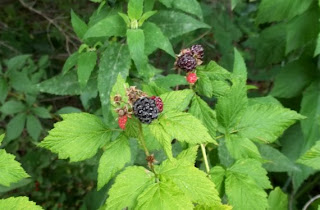 By this time the cookie from “The Kickstand” was starting to burn off and the appetite was kicking in a little bit.  The blood sugar was dropping a bit.

I noticed a number of black raspberry plants along the trail.  it is a little late in the season for these equisite berries, but there were enough left that I was able to consume over half a cup by making several stops.  They really hit the spot!

I continued to the downtown area.  By this time the legs were wearing down a little.  After getting disoriented I had crossed back and forth over the Cedar River several times.  The map looked more confused than the rider!  With each turn it seemed like the area was progressively rougher and I became lost even worse. The weather was nearly overcast so the sun could not be used for a reference.  East Waterloo is one of the places where you don’t want to be stationery for long if it is obvious you are not from that area.  It’s sort of analogous to the difference between Saint Louis, Missouri and East Saint Louis, Illinois. 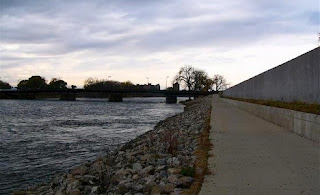 There was one minor exchange with a disrespectful youth but other than that I was able to get out of the “hood” without much difficulty.

By looking at the direction of the Cedar River current, it was easy to figure out which direction was north and south and get the internal compass back on track.

It was getting late and was time to head back since the sun was hanging its head lower and lower.  As much fun as it was to ride the trails, I chose a more direct route back (on the WEST side) to where the van was parked.  It felt good to be home!  I took a quick nap in the van before even leaving the parking lot.

Saturday night was spent camping near the University of Northern Iowa campus.  It’s a great place to park and rest.  I met up with some friends who were having a party but was a little too pooped out to indulge.  I settled back and watched TV, relaxed, and tried to sleep.  A couple of times throughout the night my buddies would stop by the van, knock, and chat for a few minutes.  With people standing outside their porches drinking beer, nobody seemed to care that someone was sleeping in their vehicle.  Despite better judgement, we walked uptown at 2:30 AM for some crab rangoons… Only in a university town can you get Chinese food in the middle of the night!  It tastes even better at that hour, too!

Just as I tried to go back to sleep the skies opened up and the Fantastic roof vent closed itself up.  The storms were intense with heavy rain and strong winds.   This 289 pound baby was rocked to a very deep sleep despite the lightning and loud thunder.
After several rounds of heavy thunderstorms, I got up the next morning and visited an awesome eatery called “Morg’s Diner.”  It is a 1950s style restaurant offering some fantastic food in a unique environment. 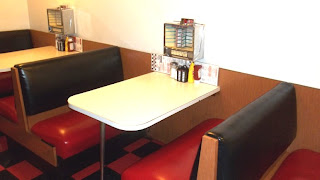 Here is a picture of the interior.  I brightened it up a little so you can see the checkerboard style floor.  On the other side of the restaurant is a an old fashioned lunch counter.

One amusing aspect is that this diner does not accept credit or debit cards.  Thankfully, I read about that on yelp.com where this diner got five star reviews.  After trying the food, I gave them top marks as well.  The food was awesome! 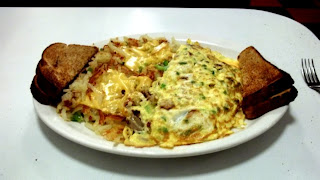 As much as I wanted to try the pecan pancake, it seemed like a good idea to save it for the next visit.  They are as big as a pizza pan!  Rather, I chose the country omelet – a three egg omelet with sausage, green peppers, and mushrooms fried in with the eggs and more stuffed inside when the omelet is folded over.

The homemade hashbrowns (shown on the left) were smothered with cheese, onions, and more green peppers.  I haven’t had a breakfast this good for a number of years.  It was extremely filling.  The folks in the booth behind me were locals (this diner is on the east side of Waterloo) and I enjoyed listening to them talking about the cannabis they had been smoking the night before and how one had a really bad case of the munchies this morning.  If they were hungry, this was the right place to go to!

After the big breakfast, I headed back to Cedar Rapids for some rest.  As much fun as it would be to have another day to bike and enjoy the town, I had received a job offer while biking through the Amish populated countryside.  The position I had applied for – an auto parts sales specialist – was offered and I accepted it.
For now, it’s back to work and the old grind.  Instead of looking at it as being tied down, it’s a chance to rebuild the reserves and add some money to the “camping kitty.”  But if I can finagle two days off in a row now and then, there are many other great trails to explore and undoubtedly other great diners to find.  It’s going to be a fun summer.
Take care and thanks for stopping by.
Van Trekker

4 Responses to Back to the Old Grind