From Iowa City to Columbus Junction – Fun Stuff to See 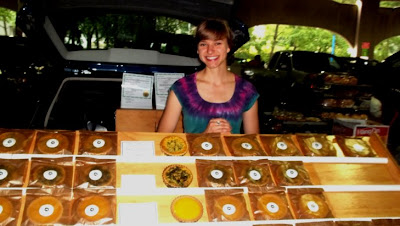 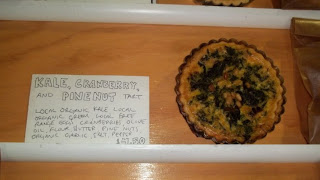 The last post was dedicated to the Trekfest parade… The event started that day at 10:00 AM.  Immediately prior, I went to the Farmer’s Market in Iowa City to purchase a few goodies for the trip.  That’s where I discovered the wonderful products of Burrowing Owl Bakery. Their website is listed below.

The tart of choice included kale, pine nuts, and cranberries.  It was positively exquisite! 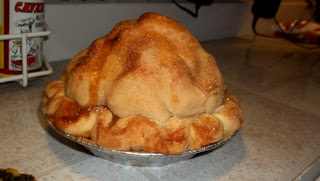 In addition to the calorie laced tart, I bought several other favorites including delicious spring rolls, a pregnant little apple pie (for Dad), and some homemade cat treats.  Dad’s pie is in the Koolatron and the dome collapsed slightly but it still looks so enticing!

One confession… I also bought a small peach/ raspberry pie and did the unthinkable.  It must have been the bite in the middle that blew the blood sugar all to hell.  Even though I was able to discontinue insulin a couple of weeks ago, I am still diabetic and carry an emergency supply just in case.  This was one of those cases!  Oh well.  It was worth a needle stick this one time.  Sunday will be back to the walking and the salads.

At this point, it was off to the Trekfest parade… After the parade is where this post resumes.

After the Star Trek parade and swap meet, I decided to go to Columbus Junction to visit the famous swinging bridge.  For someone reason, instinct said to take county road W66 rather than the four lane road which W66 parallels.  W66 used to be old highway 218 (now the four lane).  This old road had been widened some years ago but the edges were in terrible shape.  The van was rattling, lurching, bouncing and shaking at about 50 miles per hour – a perfect speed for exploring!  Low and behold, that’s where I discovered the fence made of old fashioned well pumps. 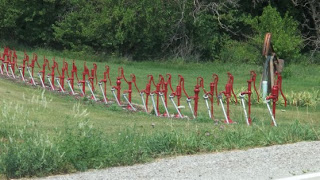 By my estimate, this guy has over a hundred of these pumps around the perimeter of his property.

This was worth turning around just so people would believe me…  I tried finding any kind of online information about the peculiar fence but there was nothing readily available.

I continued on toward Columbus Junction.  It was sad to see the devastating effects of the spring drought.  Much of the corn has already gone to tassle at a stunted height.  There was one burned up looking field of weeds – it was then I realized that it had been planted with soybeans but most of the crop was dead.  The drought has been tougher in this region.  Southern Iowa’s soil has difficulty holding water for very long due to a high clay content.  A short term drought can ruin crops in short order.  In contrast, the rich black soil of northern Iowa can stay moist a little longer but the crops up north are also suffering.  We need rain desperately. 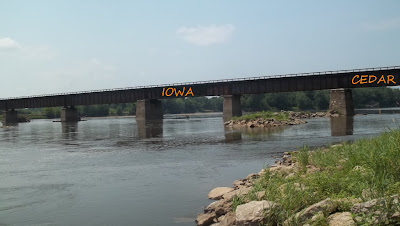 Once I got to Columbus Junction I wanted to vist the rivers.  The Iowa and Cedar Rivers, two of our larger waterways, converge at Columbus Junction.  No, I added the text to the bridges – they are not painted that way.  🙂
This charming town is unusual in its demographics.  Because of the local industries, there is a higher than average Latino population in this area.  Many of the downtown stores cater to the Latino clientele:  Mexican grocery stores, bakeries, restaurants, etc.  I checked out a Mexican bakery and found the cookies and breads to be delicious.  Some of the Mexican cookies are not so sugary so it’s fun to enjoy them in moderation. 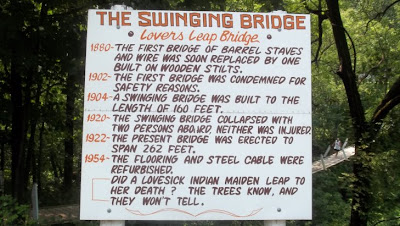 In speaking with the locals, apparently the bridge used to swing from side to side much more than it does now.  Suffice it to say that I am glad we are past that point in history.

Traversing it was fun though a little unsettling. Here is a shot from the side.  The terrain below is rocky with various weeds and tree stumps.  If a person fell from the bridge, it would definitely ruin one’s day.   The drop from the center is probably about thirty feet or so.

According to the locals I talked to, the bridge has been used for… well… evening romantic encounters.  A thirty something year old attractive blonde lady and her husband pulled up in a snazzy SUV and chatted with me.  She advised me that when she was younger she used to really be able to make that bridge shake.  Her husband looked somewhat embarrassed but nodded his agreement.  I didn’t ask… It might have ruined the mental image… Oops… Gotta keep this clean. 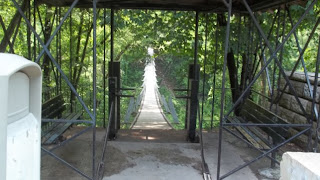 At the east end of the swinging bridge is a little seating area.  It was a great place to take a break.

There were some stoner kids in their late teens hanging out there.  They seemed a little nervous about visitors and I advised it was okay – I was just there to take some pictures of the bridge.

Next to the bench were a couple of discarded booze bottles and various other indications of people having had fun.  Apparently this is a place to hang out and party.  I should have brought a couple one shot bottles with me.  Oh well… maybe the next time.

The stoner kids liked hearing about the van and thought it was cool for someone to sleep in a van and travel around.  I was exhausted from the heat and the young men pointed out a highway overpass which had a parking lot underneath it.  It was the perfect place to take a little rest break before hitting the road again.  The shade was welcome – yesterday it was about 94 degrees with high humidity.
Once re-energized, it was time to head on down the road.  In reflecting over the day’s fun, I realized that if a week ago you told me I would be visiting a fence made of red well pumps, a swinging bridge (and apparently a swinging lady!), and chat with some stoner kids, I wouldn’t have believed it.  That’s the fun part of this life style.  You never know what’s going to happen next.   Now it’s on to the next adventure.
Take care and thanks for visiting.
VT