Greetings on what should be our last truly hot day for a while.  Not since the 1930s has Iowa been so hot and dry…  Nonetheless, despite the heat, it has been possible to do some biking and still have a lot of fun along the way.

Monday was a scorchingly hot day.  That night I had driven  to Davenport and enjoyed the Star Trek T.N.G. thing at the IMAX theatre.  Near the theatre is a terrific Walmart (in a very safe, upscale neighborhood) where I was able to camp overnight for free.  My neighbors were a Sprinter van, an Econoline (with a small window fan in the driver’s window, and the Express van.  No campers or RVs – just those of us in vans.  It was a peaceful though stuffy night of sleep.  I now know that this is a great place to return for the next trip.

After a breakfast of a bagel and salmon flavored cream cheese, the goal for Tuesday was to explore a second biking venue, the Duck Creek Parkway trail.  I had ridden this path quite some time ago and things have changed a lot – for the better!  This trail leads from west to east across Davenport, Iowa and into the city of Bettendorf, just a little farther upstream on the Mississippi. Originally I had planned an 18-20 mile ride this day.  Little did I know it would blossom into a 36 mile trip!

In speaking with the locals, the trail I had been riding on Monday (along the river) was extended, opening only days ago.  The two trails are now connected forming a sideways “V” or “chevron” shape.  A person could ride the full length of the two cities in a loop by connecting the two western legs.

I know it’s a little difficult to see from this map but at least you can get an idea.  Start at the “X”, follow Duck Creek (the top, green colored trail) west, use the “orange city streets” to get to the river, head upstream, and use the other orange segment (new trail) to get to the intersection with the Duck Creek trail.  Though this is a simple map, I have a larger, customized version online to refer to for the next ride. 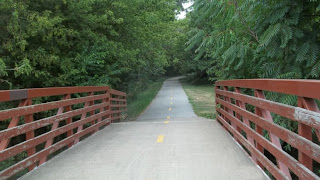 Here is a typical scene from the Duck Creek trail.  The trail is mostly flat to gently rolling and follows a beautiful stream that cuts through the city and passing through many residential areas.  There are frequent views of small limestone bluffs.

Due to the drought conditions, the stream was quite low but one could see how this trail would normally offer striking views.

I took some other pictures of the trail and stream but they look washed out.  The grass was quite dead in areas and played tricks with the camera. 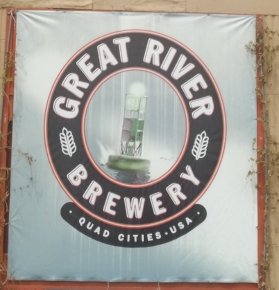 After riding west to the end of the trail, I dropped south and east (through the “hood”) to the downtown area.  By this time the stomach was pretty darn empty and reminding me of it.  The odometer was sitting on around 24 miles or so.

Thankfully, I saw two middle aged, well dressed, pot bellied professional men strolling down the street.   I asked them if they knew who had the good food and beer.  They were headed to “Barrel House 211”, a cool little pub in the downtown area.  If you want to know where the good shi* is, look for guys with ties and a slight beer guts.  It works darn near every time.

I stopped at the restaurant and had an ice cold “Widespread Wit” (a light wheat beer) made several blocks away by the Great River Brewery.  A California Turkey sandwich on flatbread rounded out the meal.   http://www.barrelhouse211.com/menu.html   The pretty lady that helped me is on the far right of the picture on their menu.  All the girls were beautiful and equally friendly.

If you get a chance to try out their food, it is pretty good stuff with many great choices.  They also have a variety of beers including one from just down the street a couple of blocks.  Here is a link to that brewery.  http://greatriverbrewery.com/    What’s funny is that I’m not usually a beer drinker but am working on that more and more!  A cold wheat beer (“Widespread Wit”) sure tasted good in 94 degree weather. 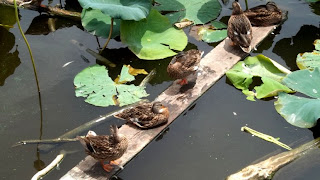 By this time a nice tailwind was helping me follow the course up the river – the same route from the previous day but this time a couple of miles farther.

As I rode by the lilies today, the aroma was intoxicating, almost as much so as the beer that made the front bike tire wobble a couple miles back…

Between the large leaves and blossoms there were some ducks perched on a log. 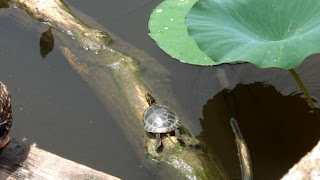 Next to them, a turtle was laying spread eagle on a log as well!  It was a pleasant afternoon to rest and take in the sun.  Why should it be limited to just ducks?

I daydreamed for a minute, putting myself into the mind and body of a duck sitting under the shade of the lily plants, taking in the aroma, and enjoying the weather.  Wouldn’t it be nice? 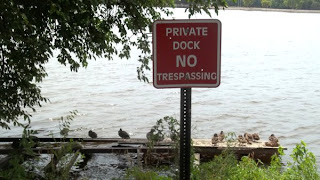 Just past the lilies, there are a number of private docks.  There are signs to that effect.

Apparently, this policy does not apply to the ducks.  Each dock had a number of small ducks sitting side by side with a similar “social distance” separating them.  What a life!

The ducks weren’t the only creatures enjoying the scenery of the river.  Traveling upstream, one could see the beautiful suspension bridge at Bettendorf, Iowa.  This is the  newer portion of the trail near where a person can connect with the Duck Creek trail. 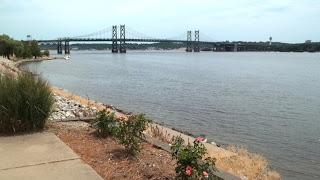 This bridge in this picture is named the Iowa-Illinois Memorial bridge.  Just seeing the majestic structures crossing the great Mississippi River is a good reason to visit the area.

The robust trail system, many things to do, and friendly locals are enough to make me want to come back for another ride this fall.

By this time the legs were about fried.  For this size of bike, riding this far was something of a challege when I was 100 pounds lighter!  You see, what I didn’t mention is that the “loop” course is not how I started riding…  In the morning, I had actually started going east for about four miles until encountering a “Trail Closed” sign.  It seemed necessary to go back to the “X” and start in the other direction.  It wasn’t until later that I learned that indeed, the trail was actually complete and one could bypass the “closed sign”.  I resolved to repeat the portion ridden earlier so as to ride the loop in its entirety.  This resulted in the bike ride being much longer but all the more fun!

Once I got back to the van (which was parked at the “X” on the map – a Home Depot), it was DEAD!  I turned the key and didn’t even get dashboard lights.  The night before the Koolatron was running on the starting system (to save house battery) and I forgot to switch it back.  While biking all day, the cooler was happily draining the van’s battery dead.  Not to worry – I’m a redundancy freak.  The Honda generator and extra battery charger (a little 15 amp, $50 special from Walmart) came in handy.  With a minimal ten minute charge, the van fired right up. 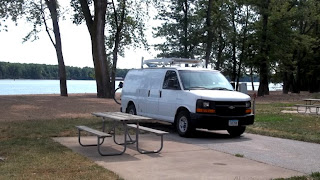 Monday night was spent at Buffalo Shores campground which is located south of Davenport in the small town of “Buffalo”.  For  $20, you get a camping spot, hot shower, electricty, sewer dumping and water hookup.  Compared to the $45 – $58 KOA across the river, this state park is a bargain.  Also, as you can see from the picture, the back of the van is right up to the bank of the Mississippi River.  The view is awesome.

Last night I slept like a baby in the 72 degree air conditioning.  The body was feeling the effects of two days of hot sun.  A nice cold shower and A/C will make a person feel new again!

Once rested and rejuvanted, it was time to head back.  Something just didn’t feel right this morning.

It’s good to trust your instincts.
There were some family health concerns and I needed to return this morning.  It all worked out okay.  I didn’t mind cutting things a bit short.  Life isn’t meant to be easy all the time.  Stress makes us enjoy the quiet times that much more.  All in all, this was a pretty darn fun trip! 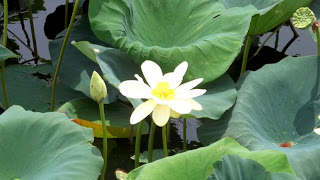 Take care.  Thanks for visiting.  Make sure and take some time to “smell the lilies” if you get the chance.

One Response to More Pictures from Davenport, Iowa