The Most Beautiful Bike Trail in Iowa

As the caption says, this was probably the most beautiful and enjoyable trail ride in my life.  The celebration started at 7:45 at Dr. Abernathy’s office at the University of Iowa.  It’s official now – I’m off all diabetes medications.  I think he’s as happy as I am.  As we shook hands at the end of the appointment he told me to come back in a few months.   I told him, “See you in about… say…10 or 15 pounds.”  Now it was time to get the party started!

Because of the sheer length of the High Trestle Trail (and the miserably hot weather), I decided to ride the “L-shaped” trail in two rides – one to the south and another to the east and west.  As you can see from the map below, that idea kind of went out the window! 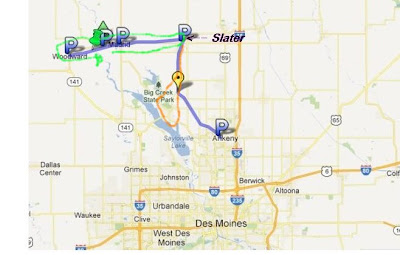 Ride #1 started in the little town of Slater at the “hinge” of the L shape.    On the map the actual course is the orange loop that looks like a noose. It was supposed to go south / southeast and return, following the blue line that is the High Trestle Trail.  I got a wild hair and dropped south for a while and then cut over on hilly paved county roads with the intention of exploring near Saylorville Lake and Big Creek State Park.  I did not anticipate the frequent, severe hills.  It was about 98 degrees at that time of the day and it took a tremendous toll.﻿

As I dropped south, the county road took me into the little town of Polk City.  I found a town square with lots of trees and rested in the shade for a bit.  Nearby was a small, independent insurance office.  A forty-something gentleman, who I presume is the agent, chatted with me and provided directions for returning to the trail.  He pointed to Broadway Street and advised to take it to the Big Creek State Park and then cross the dam.

Once I got into the Big Creek State Park, the heat and humidity were overpowering.  Thankfully, it was possible to take a little shower using a fresh water pipe.  The cold water helped revive me a bit but the extreme heat and fatigue were unrelenting.

I finally finished the loop and ended up at the van which was parked in Slater.  By this time the head was pounding and I needed to cool off again.  The Honda EU2000i generator powered the 9000 BTU portable air conditioner nicely.  In a few minutes the van went from 110 degrees inside down to 90 and then 79 degrees.  I had chained the generator to the trailer hitch so it was possible to sleep for a bit without fearing the generator might gain feet and walk away. 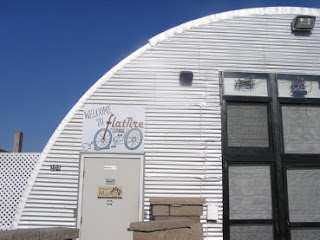 After waking up, it was time for dinner.  I drove eight miles west to the trailhead west of Madrid (pronounced MAD-rid) which looked like a great “home base”.  (see the green counter-clockwise loop on the map)  About a mile to the east was the “Flat Tire Bar”.  This cool little Quonset hut shaped bar was advertising barbecued food that night but it didn’t come to pass.  All they had was pizza because the barbecue vendor didn’t show up.

Thankfully, the bar did have Miller Lite beer.  The only thing I noticed is that the bike picked up a bit of a shimmy.  It seems to happen after long rides in hot weather followed by a cold beer.  Then the front tire wobbles and swerves just a bit.  After ten or fifteen minutes, all is better.  Beer does help with a headache – or at least it did this time.

Fortunately, Saddles Barbecuce was open and it was located back in the direction of the van.  I ordered the three meat combo (pulled pork, pulled chicken, and beef brisket. 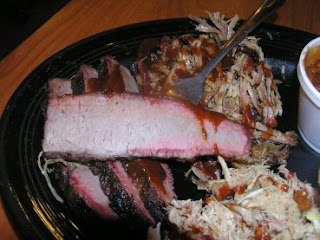 Not to torture the readers too much but here’s a picture of the food.  It really hit the spot.  The slices of meat you see are the smoked beef brisket.  Even better, there was enough left for a nice little breakfast.

At this point, I wanted to pause and thank two of the readers.  In the last couple of days before the celebration ride, two kind souls did something that was a pleasant (and greatly appreciated) surprise.  They clicked on the donate button and their generosity bought me dinner and a “cold one” on this fun ride.  I wanted to say a big thank you!  It made the day even more fun!

By this time the sun was starting to set.  I still had to ride another seven miles east to Slater, then hotfoot it back to Woodward, reverse course, and return to Madrid, via the bridge… (east, west, east) 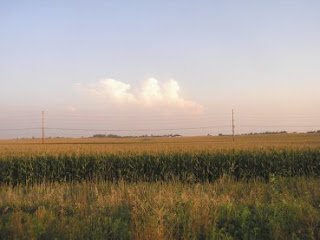 The ride to Slater was horribly slow.  It was uphill most of the way and right into a headwind making it difficult to maintain 11 MPH.

It was along this part of the trail that I saw budding thunderstorm clouds to the south.  By the time the sun had set completely, the clouds had assumed the classic anvil shape and one could see the distant flickers of lightning dancing over the distant cornfields.  It was if the distant sprinkles were taunting the withering crops.

After turning around in Slater and starting back toward Madrid (as well as the bridge, and Woodward), the tailwind and downhill terrain were most welcome.  Now it was easy to average close to 18 miles per hour.  Oh, how I wished for the days of 175 lbs and skinny bike tires.  It would have been easy to acheive a pace in the mid twenties.  Nonetheless, the miles flew by at close to double speed.

I saw the beautiful bridge and took note of it, not having the time to stop for more than a coujple of minutes as I sped on to the west, listening to the chain and derailleurs and the pounding in my aching forehead.  At the end of the trail the sun had pretty well set and it was starting to get dark.  The priority was to return to the pedestrian bridge and take pictures. 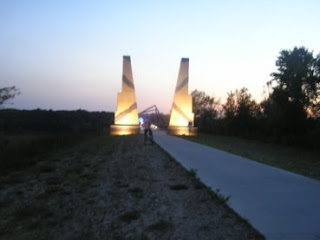 This structure is at each end of the bridge.  The “veins” you see pay homage to the coal mining industry of the area.

The bridge is illuminated all the way through with pathway markers, similar to what you see on an airport runway.

A large group of bikers passed over the bridge so you can imagine all of the headlights and flashing taillights.  All the red flashing lights looked like some sort of a police raid! 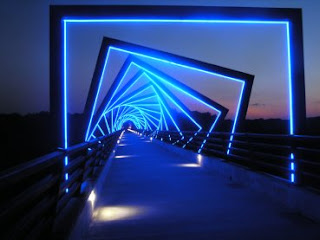 Here is a view of the bridge looking west.  The sun was setting and the LEDs had already come on.  Only a portion of the bridge is lit like this.  Remember, it’s 770 meters long! 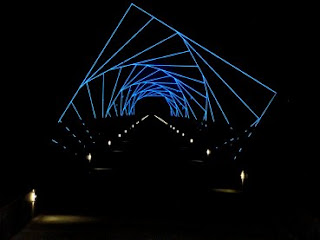 Here is the picture worth waiting for.  The sun is completely extinguished.  All that is left is the bridge, the riders and the LED lights.  The effect is almost magical.   I reminds me of a Star Trek worm hole.

After passing through the bridge tunnel, the bike’s headlight suddenly died.  It had been acting up all night and just gave up the ghost for good.  With a pounding headache and desperately wanting to get back soon, I uttered a few expletive words, sounding like the famous swearing, angry chef, Gordon Ramsey, “Oh, COME ONE!  (and worse)…    I lucked out.  Thankfully, two other riders rode the last couple miles with me to get back to the van.

The rest of the night was peaceful.  After leaving the High Trestle Trail behind I decided to camp in a convenient Flying J campground…I mean truck stop… it was perfect for a good night’s sleep.  Wouldn’t you know it, an out of state delivery van parked next to me.  Apparently, I wasn’t the only one sleeping in his/her van.
Now it is Friday and after a late start, I visited the Maytag Dairy Farm – the place the makes the famous blue cheese loved by chefs like Emeril Lagasse and Gordon Ramsey.  More about that on the next post.
Today’s plan is to take it easy and only ride 16 miles along the trail in Marshalltown, Iowa.  They have a cool paved path along the Iowa River.  Dinner tonight will be at a famous “grill your own steak” place in Montour, Iowa.  Then it’s off to the Mesquawki Indian Casino for a night of camping fun…
One last note – In the coming days, I’m going to replace the picture you see when you pull up the blog.  Here’s a preview…  The windmill farms seen coming into Marshalltown are so cool.
The last couple of days have been enjoyable. Thanks again to the readers who make it fun to keep this blog going.  And special thanks to the friends in Canada and West Virginia who made the day even more special.
V.T.

3 Responses to The Most Beautiful Bike Trail in Iowa