What an unusual day!  I woke up early during a strong thunderstorm (which we LOVE in drought stricken Iowa).  The old van was a rockin’ from the wind.  Fortunately the storm passed quickly and it seemed like nice weather for biking.  I just didn’t know where to go do it.

During the daily morning McDonald’s visit, the friends were telling that the HyVee grocery stores were having a “Customer Appreciation Day” and offering bargains such as $0.79 pizza slices and other great deals.  Being a “grocery store grazer”, I thought it would be fun to check out a couple of stores and find some freebies or special sale items.  Many of us eat on the cheap as much as possible and free samples are welcome.  More than once, a few eyebrows have been raised when snitching four or five cheese cubes.

With a slice of pizza in mind for lunch, I had to swing by the bike shop first.  Rudy came with me.

On August 7, 2012, this little guy became another “van trekker”.  He was a gift from the local police department.  During an evening ride, I observed the cops handing out free soda and chips for the “National Night Out” event.  I spoke with them and was offered goodies, but had to decline the kind offer.  Then one of the volunteers suggested this cute little stuffed dog.  He fits in the cell phone holder on the bike and is a great companion.  I named him Rudy.  This morning he rode along to the bike shop and beyond.

Speaking of the local shop, they are getting to know me pretty well at Hall Bicycle in Cedar Rapids.  The Trek is racking up a lot of miles and a few things were in need of fixing or adjusting.

The bike headlight had crapped out during the High Trestle Trail ride a couple of weeks ago.  It’s a Bontrager Ion 2 – not a cheap unit at all.  But there’s nothing like buying a good product from a great dealer.  The guys at the shop simply swapped it out under warranty.  Some things are just better to buy locally. 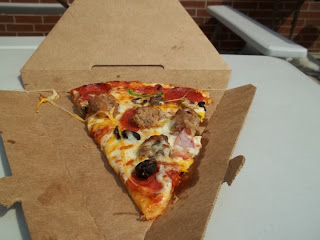 After the bike shop, it seemed like a good idea to ride to the store and get a piece of the tempting $0.79 pizza.  HyVee makes decent thin crust pizza and it normally sells for $2.00 a slice.
Unfortunately, when I got there a sign prominently declared “Limit one slice”…  Crapola!  One slice – an eighth of pie – wouldn’t fill up a big guy.  What the heck… It might be fun to simply ride a few miles to the next HyVee and get another slice. 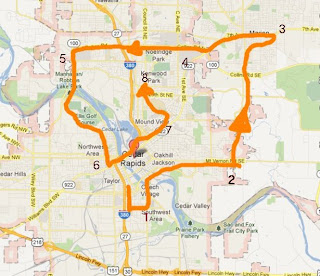 It all worked out for the better, at least in terms of doing the right dietary thing.  After arriving at the second store, the health conscious instinct took over and I bought exactly fifteen grapes from the salad bar rather than eating more pizza.  That’s how the craziness began.

From the Mount Vernon Road store it was a difficult, hilly ride into the town of Marion for another few salad bar items from the third store.

Then I rode west, hitting two more stores.  By this time it was apparent that the challenge was to continue on and visit all eight stores despite very strong winds.

The ride turned south, then north, and stopped at the last three stores, racking up 37.76 miles.  You can see the spiral when looking at the map.  That was an idea conceived at store #2.  It was meant to keep the ride fun and interesting.

Talk about a good workout!  City riding is much more challenging than riding the trails.  It was friggin’ exhausting!  It was worth it.  Even a crazy bike ride like this is a cool diversion.  It’s difficult to get burned out or bored mixing it up like this!

The number of samples varied from store to store but some of the goodies included seasoned steak, various types of melon balls, deli salads, sushi samples (YUM!), and little cubes of cheese.  Few of the sample tables were supervised, offering a virtual meal if someone was so inclined.  I also had a chance to buy a single can of Zevia grape soda, one of the few diet grape sodas in existence.  It was by far the favorite of the flavors tried.  It’s fun to check out new stuff in the healthy foods sections of the store.
The long bike ride was a great chance to mull over some trip plans for next week.  The weather should be cooperative and it will be a great opportunity to go trout fishing and biking in the Decorah, Iowa area.  There are awesome bike trails to check out, a beloved little pizza parlor, plenty of scenery, a clock museum, a Laura Ingalls Wilder museum, and the famous Decorah eagles.
Chances are that many of the readers know of the famous eagles’ nest in Decorah and the webcam that has been following the progress of the family of birds.  The webcam site went viral and crashed the Internet servers many times.  Here is the link:  http://www.farmyou.com/falcon_cams/index.html
Millions of folks all over the world watched this family as the baby eagles grew and eventually left the nest, unaware of the curious onlookers.
As you can see, there is a lot to see and do next week.  The next few days will be spent getting ready for the excursion.  After this trip, the next major outing will be a car ride to Kansas City in mid September as the weight loss challenge winds down and Dad and I got to visit my sister (who has been instrumental in motivating this year’s progress).
Once the fall is over, what is in store for the winter?  More camping and exploring.  With the funds earned (about $600) from losing the weight, $400 will be used to buy gas cards and $200 to pay for future camping fees, guaranteeing more outings in the future.

Let’s hope for a cold winter. It would be a blast to go ice fishing and camping and then post the pictures here.

Thanks for stopping by.  Enjoy the upcoming fall season!
V.T.
﻿