Little House on the Prairie – On Four Wheels

Wednesday was a very busy day.  After finally getting new glasses in La Crosse, Wisconsin, I camped for free at Anytime Fitness.  It was a perfect night’s sleep after a good workout.  Once the sun came up it was time to head back to Iowa and start visiting the places originally planned.  There was one delay, however.

While in La Crosse (and a suburb to the east), I was within ten minutes of where the van was purchased in Bangor, Wisconsin.  It had been an emotional time.  For some reason I felt compelled to go back. 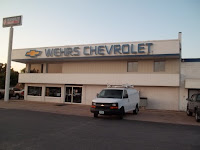 This was where it all began in April of 2011.  A four year old cargo van was up for sale on the Internet.  I struck out from Iowa with a wad of cash, a checkbook, and a Cavalier leaking its bodily fluids.   It was time to find a new vessel, one that would lead me to see new things in an exciting new way.  Somehow I knew this van was the one.

The memory of my mom was in my mind and her death was still having a great impact – as it does to this day.  But somehow I knew this van project was the destiny that she and I had discussed at one point.  It was what I had to do.  The rest is history.  It was good to re-visit the dealership and remember where the magic had started. 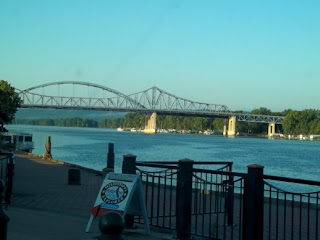 On the way back to Iowa, I had to pass through La Crosse.  A tiny little Farmers Market was open and I purchased four yellow summer squashes from a sweet older Asian lady.  She only charged a buck!  With a twinkle in her eye, she slipped a small cucumber into the bag, too.  It’s going to be made into Tzatziki style sauce.

I visited with an older local gentleman at his booth where I purchased a little bag of skinny red peppers.  We each ate one and grumbled how hot they were.  It was a pleasant burn.  When I got back to the van, a small tortilla with some sour cream helped the neutralize the heat.  The stomach then started to say, “Where’s the rest of breakfast?” 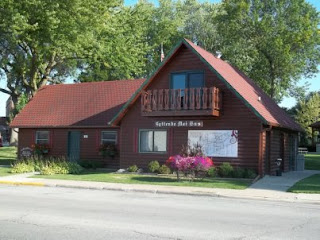 Breakfast was cooked in this little park at the town of Spring Grove, Minnesota.  Spring Grove was the first Norwegian settlement in Minnesota.  It is an immaculate community.  If a person is of Norwegian descent, this is a “must visit”.  One glance at the names of the businesses will confirm the heritage as you see names such as “Gunderson” and “Kjar” etc.

It was a perfect place to cook a healthy omelet for breakfast and relax a bit.

The next stop along the way was the Laura Ingalls Wilder Museum in Burr Oak, Iowa.  This tiny town is located several miles south of the Minnesota border.  Though Laura did not write about this community in her series of books which included “Little House on the Prairie”, she and her family did live here for about a year. 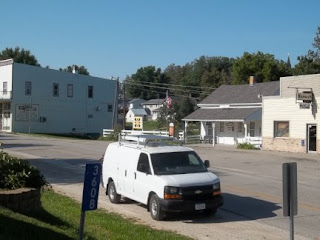 The white building you see (with the two roofs) is the old hotel where Laura and her family stayed.  There were twelve rooms in this tiny building.

Though it is difficult to see, there are two doors on the front of the building.  The left is for the tavern and the right door is for women and children.  Only the men would go into the tavern.

The base price for a room was twenty-five cents however a more luxurious room could cost up to a dollar and seventy five cents. 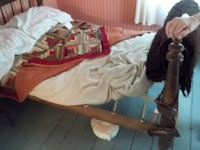 For stage coach drivers, there was a bed in the hallway.  Its use was free however you had to share a bed with up to two other men.  No ladies were allowed to sleep in the same bed with a stagecoach driver.  Such was improper!

The beds used a weave of ropes hooked on pegs that ran along the top of the bedframe.  It was the suspension – the springs – for the bed.  Once the ropes loosened, they were taken off the pegs, twisted, and put back on the pegs, thus making the bed more firm.

The beds contained straw which was periodically changed and provided the cushioning.  It was not unusual for the fresh straw to contain insects.

Some people say that the old expression “Sleep tight and don’t let the bed bugs bite” is a reference to keeping the bed ropes snug and to hope not to get bitten by insects in the straw. 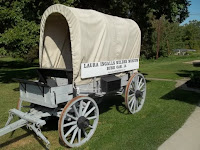 The pump organ above was used to entertain the women and children in the parlor.  Since there was no electricity, one had to pump the pedals to provide enough air to create sound.

Can you imagine how much work it was to read the notes in the book, touch the keys on the keyboard, and pump the pedals?

To the right is a 3/4 sized replica of a wagon similar to that which Laura’s family used.

After the fun trip to the museum, it was time to decide whether to go biking or fishing.  I decided to do both!  The Trout Run Stream and trail runs along the southwest to southeast parts of Decorah.  I started near the southwest at the hatchery.  The Decorah Hatchery is one of three facilities in Iowa that breed and stock the streams with trout including rainbows, brook trout, and brown trout.  The sport is too popular and the climate too varied to support natural reproduction.

Wednesday was trout stocking day which worked out perfectly.  I put the collapsible fly rod and lightweight reel in the pannier bag on the back of the bike.  The trail runs the whole length of the trout park, offering a quick way to hit the best places.  While there were a number of holes accessible from the cement path, the very best holes required a little walking, too.  Here’s why. 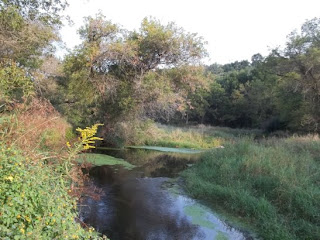 Many of the trout streams are set up to make it easier for seniors.  Those parks where you can drive up to go fishing usually get hit the hardest.  Those requiring some degree of mobility are lightly fished and brimming with aggressive, hungry trout!

The fishing was a little slow due to the pressure put on the first few holes by a lot of fishermen that day.  I watched a few of them.  Some used bobbers and sinkers suitable for a river!  They didn’t catch anything.  I can’t say much though after having a little mishap.

Unfortunately, the new bifocals are cut a little differently than the old pair.  I stepped down while looking through the wrong lens and stepped past the embankment, slid down and plunged one leg into the water.  There was such a commotion that the fish didn’t bite after that.  I moved upstream to the hole you see in the picture above.  That is where I got the rest of the limit of five trout. 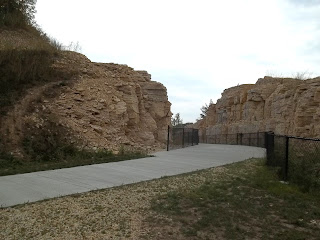 Since being part of the way into the bike ride, it was easier to finish up the trail riding before returning to the van to clean the fish.

Trout Run Trail is about 11.5 miles long.  I had completed the easy part – the eastern half.  One of the trailheads is featured above and toward the right with a sculpture intended to look like a fish.

The last 1/3 of the trail was through hilly limestone bluffs.  Men had made “cuts”, places where the limestone was removed in order to put the trail through.

It was still extremely hilly.  For a heavy guy in his mid 40s, it was HELL.  Talk about a nice feeling of accomplishment when it was all done.

The sculpture picture was taken near one of the trailheads which is about a half mile from the Walmart store.  Contrary to what the Internet sites say, you CAN camp at this Walmart and the store is pretty nice about it.  Needless to say, I didn’t visit the gal at the vision center who had been kind of sarcastic the other day on the phone…  One can’t blame her though.  I was pretty cranky, too!

After a busy day of touring, biking, fishing, and camping, I slept like a baby.  It had been a great day!  At the time of this posting, I’m parked in West Union, Iowa in a “town square” environment mooching some wifi.  On the way into town is a tiny campground (only two spaces with electricity) for $8.  It is called Dutton’s Cave and offers some hiking.  Though I had planned on returning tonight, that’s not going to happen.  It doesn’t matter one bit.

You see, in a way, I’m already home…  It does not matter where this van is parked!  Now it’s off to see the inside of an old limestone cave.

With that, I wanted to leave you with one last wish.  It came from a sign just over the Minnesota border on Highway 52.  Take care!

One Response to Little House on the Prairie – On Four Wheels